We still don't know how to talk about Pennsatucky: The reality of rural sexual assault and how class plays out in "Orange Is the New Black" 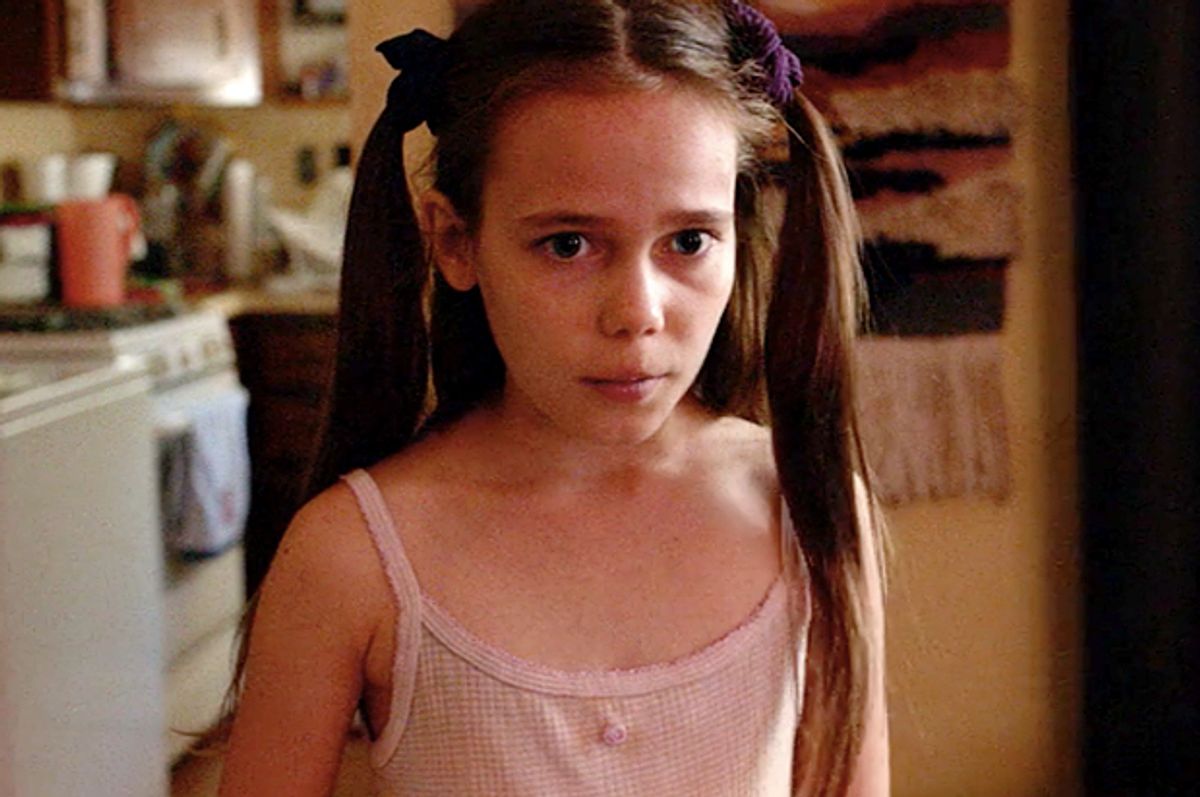 In episode 10 of this season of “Orange Is the New Black,” we watch as Tiffany “Pennsatucky” Doggett is raped twice—once in her memory by a boy in her Virginia hometown and once in the present by Litchfield prison guard Coates, with whom she had built a fragile friendship. In its recap, the New York Times’ Arts Beat flippantly titled the episode “Unlucky Pennsatucky.” (It's worth noting, however, that the recap itself treats her story with gravity.)

The nickname “Pennsatucky” is a riff on “Pennsyltucky,” a term that derives from mashing up Pennsylvania with Kentucky, and which refers to the sparsely populated Western and central sections of Pennsylvania, which are geographically and/or culturally part of Appalachia; the real life Pennsatucky hails from this region, according to the "OINTB" book. In it, Piper Kerman describes Pennsatucky as “a young woman from western Pennsylvania who proudly called herself a redneck” and a member of a group Kerman calls the Eminemlettes—“Caucasian girls from the wrong side of the tracks.” Pennsatucky struggled with an addiction to crack and had lost custody of her child. In the show, she is serving time for shooting a nurse at an abortion clinic in Fishersville, Virginia, who made disparaging comments about the number of abortions she had. “She was like a lost girl,” wrote Kerman.

But Pennsatucky and the thousands of other young women growing up in rural communities in Appalachia, and across the American South and West, are not simply “unlucky”—they are at high structural risk for rape and sexual assault. According to 2012 FBI crime estimates, the states with the highest rates of reported rapes per capita were, in order: Alaska, South Dakota, Michigan, New Mexico and Arkansas. With the exception of Michigan, in all of these states about half their populations or more reside in rural areas or small towns—70 percent in South Dakota. In Alaska, where the figure is 55.5 percent, the rate of forcible rapes per year is 80 per 100,000, nearly triple the national average. “We have an epidemic,” Alaska Gov. Sean Parnell told CNN, whose Sean Sutter did a series of investigative reports on rape in the state last year. New Jersey and New York had the lowest rates of reported forcible rape per capita in the nation.

Nationwide, experts believe the available numbers on rural sexual assault underestimate the problem. A 2003 report from the National Sexual Violence Resource Center found that in rural areas, the numbers of those who seek crisis services far exceed the number of reported rapes. The NSVRC hypothesizes that underreporting, a major factor in all states, is especially pronounced in rural areas because of the low population density, which means victims probably know or have significant relationships with their attackers. Studies like those of Barry Ruback, a professor of sociology at Penn State, have consistently shown that the closer the relationship between the victim and the offender, the less likely a victim is to report. Furthermore, in rural areas, police officers are more likely to be involved in the victim’s social network, say Ralph Weisheit, David Falcone and Edward Wells, authors of "Crime and Policing in Rural and Small Town America." Other factors that may cause rural rape to go unreported include lack of cellphone reception and public transportation, substandard road infrastructure, and the long distances that must be traveled to reach law enforcement or crisis centers, which may be hours away or in another state.

“Sexual assaults in rural areas are mostly hidden crimes, hidden both intentionally and unintentionally by characteristics of a close-knit culture or an isolated lifestyle,” writes the report’s author, Susan Lewis. “To varying degrees, rural populations are often marginalized from the mainstream power structure, which holds the opportunities for assistance and services through resources and policy initiatives.”

Others point to less tangible factors like a culture that prizes independence from government institutions and family reputation over safety and transparency. “Rural people don’t report unless they have to,” says a program director in a rural community in Pennsylvania, identified in the report only as Tanya. “People in rural communities victimize each other.” Ginger, who directs a crisis center in rural Alaska, said that sexual assault of adult women is nearly universal where she lives and that adult sexual assault is viewed as the norm. Echoes of Pennsatucky's mother encouraging her daughter to “Go on and let them do their business” (previously we’ve also seen her mother force her to drink a liter of Mountain Dew to secure a higher government assistance check). “If you’re real lucky, most of them will be quick like your daddy. It’s like a bee sting, in and out, over before you knew it was happening.”

"OINTB" has generated rich cultural conversations about other pressing social problems that the show’s characters embody, like the treatment of incarcerated trans folks, bisexual erasure and butchphobia, but Pennsatucky’s flashback episode has not started a similar dialogue about sexual violence against rural American women. Why?

“Many people who would bite their tongues and stifle such hostile language about other social groups seem to feel free to spew vitriol and even violent intentions towards ‘rednecks,’ ‘hillbillies,’ members of evangelical Christian churches and poor white people in general,” writes Betsy Leondar-Wright on the blog of Class Action, a nonprofit organization that works to end classism, in 2013 after the first season aired. “In a jumble of sometimes contradictory stereotypes, Pennsatucky, played by Taryn Manning, is at various times a gifted faith healer who speaks in tongues, a homophobe, an anti-abortion zealot, a meth addict, mentally ill, and eventually a violent psychopath. The makers of the show clearly got their only images of rural poor white people directly from the movie ‘Deliverance.’”

This season, however, has seen the evolution of Pennsatucky from this stereotype stew to a more sympathetic character. No longer is Pennsatucky a homophobic villain, but instead she seems to have settled into a role as a fully realized side character—she has more complex emotions, is grappling in a true way with her past; she has been redeemed.

And yet the mechanisms by which she has been transformed into a likable character seem suspect. One of the most marked ways is her appearance—this season her hair is less greasy and pulled back into a neat ponytail, her skin looks smoother and healthier, and most important, she has false, but perfectly white and straight teeth.

As Susan Sered of Bitch points out, "OINTB’s" creators use rotted teeth to clearly mark Pennsatucky and her former compatriots Angie and Leeanne as white women who are both poor and rural, and thus from a different social and cultural place than Piper and Nicky, or even Norma or Yoga Jones. “Tooth decay is embarrassing. It signifies that supremely unforgivable character trait: not taking care of oneself—a particularly serious flaw in women, who are expected to look attractive,” writes Sered. “More broadly, on one side of the class divide are those with normatively attractive bodies, respectable educational achievements and decent jobs. On the other side are those whose poor teeth and other ‘defects’ are read as signs that they are incapable of managing their own lives.” Would the creators of "OINTB" ask us to sympathize as much with a girl with “meth mouth”? Leeanne and Angie are still somewhat flat characters—a bully and a follower, respectively.

Further, Pennsatucky’s back story, used in a redemptive context this season, is riddled with excessive Appalachian clichés that paint her world as comic and undignified and reduce her narrative to one of familiar self-destruction wrought by bad choices and ignorant, provincial attitudes. In one scene, we see her trading sex for a six-pack of soda—a move that clangs loudly as the product of the imagination of people who have spent little time in the lives of rural people and who are searching for shock value.

Waynesboro, Virginia, where Pennsatucky’s flashbacks are set, is a small city of about 21,000 residents. It is home to the headquarters of the telecommunications company nTelos, sits steps from the Blue Ridge Parkway and is a 20-minute drive from Charlottesville, where the University of Virginia is located. I lived in West Virginia about two hours west of Waynesboro, and worked with teenage girls and their families. The mothers I met wanted their daughters to understand sex and to make informed choices; they wanted their daughters to be in loving, healthy relationships. Never would one of them have said, “It’s like a bee sting, in and out, over before you knew it was happening.”

This is the problem with Pennsatucky’s mother’s advice and with Pennsatucky’s whole sexually traumatic back story—it tries to provide a “reason” for Pennsatucky’s promiscuity and deadening around sex, tries to provide a reason for Pennsatucky herself, appears to be trying to justify a life, which by logical extension, needs justifying. It tells us that the mode we should be using to see Pennsatucky, even current “redeemed” Pennsatucky, is pity. It creates sympathy when for every other character—even those like Nicky and Morello who have reached time and again for self-destruction—we have empathy. Pennsatucky’s past, as written here, in its use of extreme situations only confirms what most Americans previously thought about women like her. While Nicky’s back story adds a layer of nuance and complexity to her character, Pennsatucky’s gives her no such benefit. It’s difficult to imagine a scene in which a rape was perpetrated against Nicky earning her the descriptor “unlucky.”

I suspect that stereotypes about poor rural whites and Appalachians contribute to our tendency to view Pennsatucky as an irresponsible woman who has brought sexual destruction upon herself, or as an unfortunate product of a brutally impoverished culture — or both — rather than reading her rapes as emblematic of an important feminist and humanitarian issue. Women in rural places are at an especially high risk for rape and sexual assault due to structural, not personal, factors. This is the problem with stereotypes—they are recycled stories, they make no new meaning. As long as the stories we see on television confirm our biases and blind spots about place and class, little progress can be made off-screen.