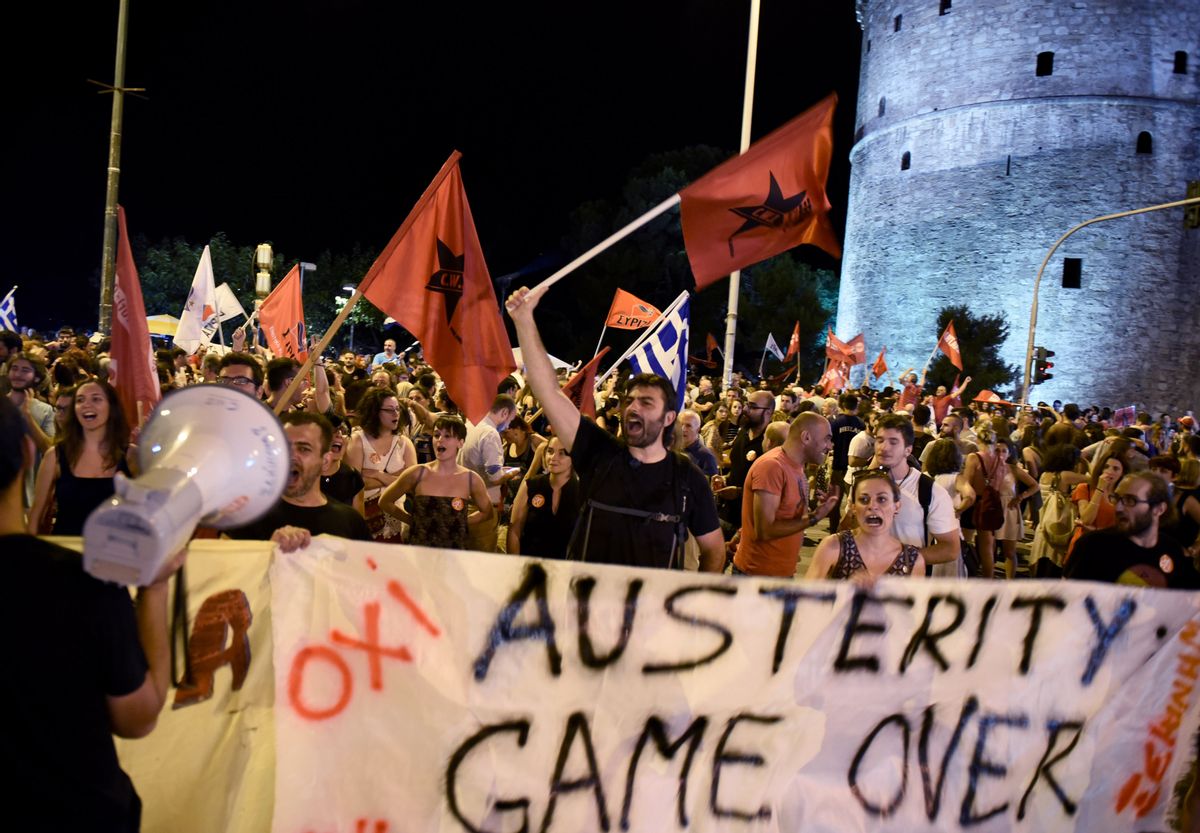 Supporters of the No vote celebrate after the results of the referendum in the northern Greek port city of Thessaloniki, Sunday, July 5, 2015. Greeks overwhelmingly rejected creditors demands for more austerity in return for rescue loans in a critical referendum Sunday, backing Prime Minister Alexis Tsipras, who insisted the vote would give him a stronger hand to reach a better deal. (AP Photo/Giannis Papanikos) (AP)
--

1. GREECE LURCHES INTO UNCHARTERED TERRITORY AND AN UNCERTAIN FUTURE

The country's voters in a referendum overwhelmingly rejected European demands for more austerity measures in exchange for a bailout.

Pope Francis returns to Spanish-speaking Latin America on an eight-day tour that takes him to Ecuador, Bolivia and Paraguay.

Negotiators are nine days into the talks and hope to clinch a deal by Tuesday, but America's top diplomat said they are not close to an agreement with Iran.

The Americans became the first country with three women's titles and got a measure of revenge for their loss in the 2011 final against Japan.

5. TO RENAME OR NOT TO RENAME?

The massacre at a predominantly black South Carolina church has institutions in the U.S. evaluating whether they should continue enshrining the names of historical figures linked to slavery and the Confederacy.

6. US-LED COALITION UNLEASHES A WAVE OF AIRSTRIKES IN EASTERN SYRIA

The Islamic State group said at least 10 people were killed and many wounded in the attacks in its stronghold of Raqqa.

On the Facebook page for Humans of New York, the leading Democratic presidential candidate predicts that the future for gay youth "is going to be amazing."

8. TWO DOZEN PEOPLE ARE HURT WHEN A DECK COLLAPSES UNDER THEM AT A NORTH CAROLINA BEACH HOUSE

Authorities in Emerald Isle are blaming deteriorating nails after years of exposure to sand, salt and moisture.

9. WHO WAS CHRISTENED AT A ROYAL ESTATE ON ENGLAND'S EASTERN COAST

Princess Charlotte, daughter of Prince Williams and his wife Kate, was dressed for the occasion in a replica of the intricate lace-and-satin christening gown made for Queen Victoria's eldest daughter, also named Victoria, in 1841.

10. WHAT FIZZLED AT THE BOX OFFICE

Anticipated new releases "Magic Mike XXL" and "Terminator Genisys" did not have a strong start, leaving the popular holdovers "Jurassic World" and "Inside Out" to top the holiday weekend.