How "Inside Out" rejects the self-esteem mandate: "You are not going to feel great about yourself all the time"

Salon spoke with Art Markman, a cognitive psychologist and podcaster, on the ups and downs of the Pixar movie 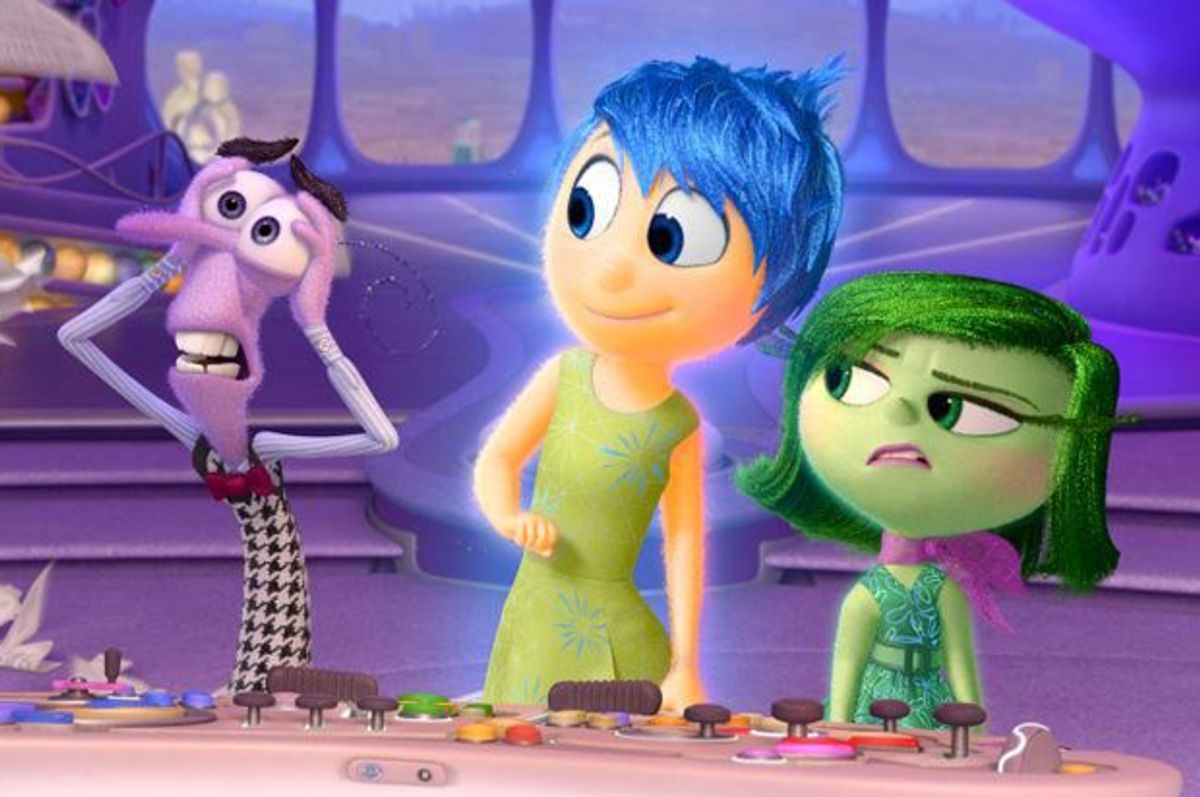 The Pixar movie “Inside Out” has not only entertained children and adults since its June opening, it’s brought psychological concepts – the importance of memory, the role of the unconscious, the complexity of emotion – to mainstream movie audiences in a way we’ve not seen at least since the heyday of Alfred Hitchcock. For a kid's movie, its degree of psychological complexity is simply off the charts.

“Inside Out” tells the story of an 11-year-old girl named Riley, moving with her parents from Minnesota to San Francisco. Much of its tale is told literally from inside her head, where characters representing sorrow, fear and other emotions both quarrel and cooperate to shape the way her experiences resonate.

We spoke about the film with University of Texas cognitive psychologist Art Markman. He's the author of the book “Smart Change” and one of the voices behind the podcast "Two Guys on Your Head," which originates at KUT in Austin.

You’re both a cognitive psychologist and a filmgoer, a civilian; why don’t you start by telling us what you made of “Inside Out” in general.

It’s a beautiful film. Both as a psychologist and as a filmgoer. I don’t cry in movies often, but this one had me choked up at the end. It’s a very well done film. It told a great story and has the emotional impact you have come to expect from the best Pixar films. At the same time, they do a really nice job of doing that in a context that’s reasonably accurate as far as the underlying psychology.

I was surprised at how many psychological concepts the film tackles. It could have been a trip inside the mind, or the heart, with much less of that. Which of the psychological metaphors or psychological ideas in the film seem accurate or sophisticated to you?

I think they do a nice job of recognizing that, for example, the experiences you have during the day are really consolidated into memories while you are sleeping, particularly at that age. Sleep turns out to be really critical for that. The fact that memories themselves, and the emotional reaction you have to those memories, changes over time, is a nice piece to it as well. That in the moment, as a child, you may experience great joy playing a hockey game and then look back at that same event as an older child or adult with a twinge of sadness. It’s this notion of nostalgia, which has a mixture of happiness and sadness in it. So the same event has layers of connotation, layers of complexity on top of it. As we get older new experiences can reframe the same event.

I think another thing the film does well is that it recognizes all the emotions that we experience play a role in our lives. We live in a society that tends to be very happy-driven. So we tend to discount the importance of sadness and of frustration. One of the things the movie does, obviously the central relationship there is the one between Joy and Sadness, but rather than tell the more simplistic message that you get from many kinds of films, it recognizes that there is a good time and place to be sad.

Also, the preteen years are a time in which emotions get more complex. Joy is dominant in the child in the movie. Each of the rest of the emotions get to play their role as she ages in the film. That’s a realistic thing. As kids grow up, the quality of their emotional experience gets more complicated as well.

It’s one of the few movies I’ve ever seen that seems to critique blind optimism or shallow happiness. It’s strange in part because Hollywood has been an engine of blind happiness and unreflective uplift for a long time. That’s what early Hollywood movies traded in. My hunch has been for a long time that blind optimism can be dangerous. The film shows us that a full, mature life has a mix of things. Where did the worship of happiness and optimism come from? Is that just an American thing? Is that a post-World War II thing? Is it indeed a not healthy kind of way of looking at the world?

Certainly over the last 100 years we have used entertainment as escapism. Between movies, which would allow people to experience worlds they couldn’t experience, but also in the Horatio Alger stories, this was a cultural idea of the appropriate way to lift yourself up by your bootstraps. That’s escapist in another way. I think those ideas have been part of entertainment for a long time.

What’s been interesting is since the 1970s with the rise of the self-esteem movement in psychology was this idea that actually part of what we are trying to do to promote well-being is to promote this very healthy sense of self. And the marker of a healthy sense of self is that you feel good about the situation you are in. Good and comfortable. And that when you are feeling sad and uncomfortable, that’s a sign there’s something wrong that needs to be addressed. What we are seeing now in the field of psychology and I think culturally as well is a pendulum that’s beginning to swing back away from that to recognize that you are not going to feel great about yourself all the time because sometimes you have more work to do. That dissatisfaction is motivating.

Gabriele Oettingen, who is at NYU, has a book that came out this year called “Rethinking Positive Thinking.” It’s based on 15 or 20 years of her research demonstrating that people who only think positively tend to be less motivated and less likely to achieve their goals than people who actually contemplate the negative consequences of their potential actions or inactions. Positive thinking is great for giving you hope, which is important for the worst times in your life. On those days you think I can’t possibly go on, that’s when you want to think positively and recognize that it’s not as bad as I’m thinking. But when you are really trying to motivate yourself to do something, then some dissatisfaction, which can express itself as sadness or frustration or even anger, that can be really motivating. Those emotions of discomfort are actually important parts of our system. I think the field recognizes now that all of our emotional states end up playing important roles in our ability to regulate our behavior. The movie does a nice job.

As a total aside, you notice there’s a lot of articles right now in the wake of the Supreme Court’s decision about gay marriage. There’s been a lot of articles now coming from the gay community pointing to all the continued inequalities. The message is let’s not be too satisfied or too complacent. There’s still work to be done here. It’s an implicit recognition that if you have everything you want, there’s no reason to do anything.

Were there elements of “Inside Out” that seemed outdated, misguided or psychologically simplistic compared to the things we’ve talked about?

It’s a movie, and it’s a movie for kids, with adult elements to it. One thing is, emotion is actually much more complicated than it is portrayed to be, in a lot of dimensions. One, of course, is that there are more than five of them. But for another, the way emotion really works is that you engage a bunch of goals. Your motivational system has various goals and when you are succeeding at those goals you tend to feel better and when you are not succeeding you tend to feel worse. The more engaged you are with those goals, the more energized, the more energy and stronger the feelings you get are.

Notice how I’m using the word "feeling." Psychologists tend to call that "affect." Emotion is actually an interpretation of your feelings, an interpretation of that affect. So in some sense at first I feel pretty good right now, I wonder why? And then you look around and think, “Well, I just got a nice piece of cake. I must be satisfied.” Versus somebody just said something nice to me so I must be happy.

There are lots of situations in which, most of the time, it’s fairly easy to explain why you are feeling the way you are feeling, but there are times when you get it wrong. Which is why anybody who has hung out with a teenager for any length of time knows that a teenager will start getting angry at his or her parents -- and the movie does sort of get this right, although it doesn’t get the details of it right -- the kid gets angry at her parents when she’s actually frustrated about moving. She’s not really angry with her parents. She’s got all this energy and negative feeling that comes with being embarrassed at school, being frustrated with the new house, and you got to direct that at something so you look around the world and think I’m feeling bad and I’m feeling strongly bad, it must be that guy sitting across the table who is my dad. I’m annoyed at him.

That process is glossed over in the movie for good dramatic reasons. It would be a disastrous movie to go through that. But it’s a necessary oversimplification.

Where do most people get their ideas about psychology and the mind from? Are movies and other kinds of entertainment often useful in giving us a real sense of how the mind works?

Unfortunately, psychology didn’t make the cut for the major sciences that people study in school. A lot of people don’t get a real scientific background about what we know about the way the mind works. We end up backing into that from other places and learning about it from magazine articles and the occasional news bit. Then these kinds of entertainment vehicles are a really powerful way of giving people some knowledge.

I applaud the folks at Pixar. They actually did have psychologists they consulted with and they really made an effort to make this movie one that was scientifically defensible, if not 100 percent accurate. That’s good. And hopefully, because it was a good movie not just in its accuracy but in terms of being a movie, that spurs a few people to really look beyond the movie and start looking at all the kinds of resources that are available. There are a lot of great books. There’s a lot of great information online that’s rooted in the science, for all ages, for people who are interested in how this stuff works. Not to mention a great podcast out of Austin.

Can you think of a movie in recent years for adults -- an American movie -- that is as psychologically sophisticated as this one?

The gold standard is probably “Memento” in the sense that “Memento” is the best depiction of what’s called anterograde amnesia where you lost the ability to form new memories. Without giving it away for anyone who hasn’t seen it, the structure of the movie gives the viewer a real first-person sense of what that experience is like. To me, bar none, it’s a fairly narrow bit of psychology, but it’s an absolutely brilliant depiction.

Animation Inside Out Movies Pixar Psychology