My sexless soul mate: When men and women really are "just friends"

My ex couldn’t tolerate my deep connection with a woman. Are girl-guy friendships misunderstood, or am I in denial? 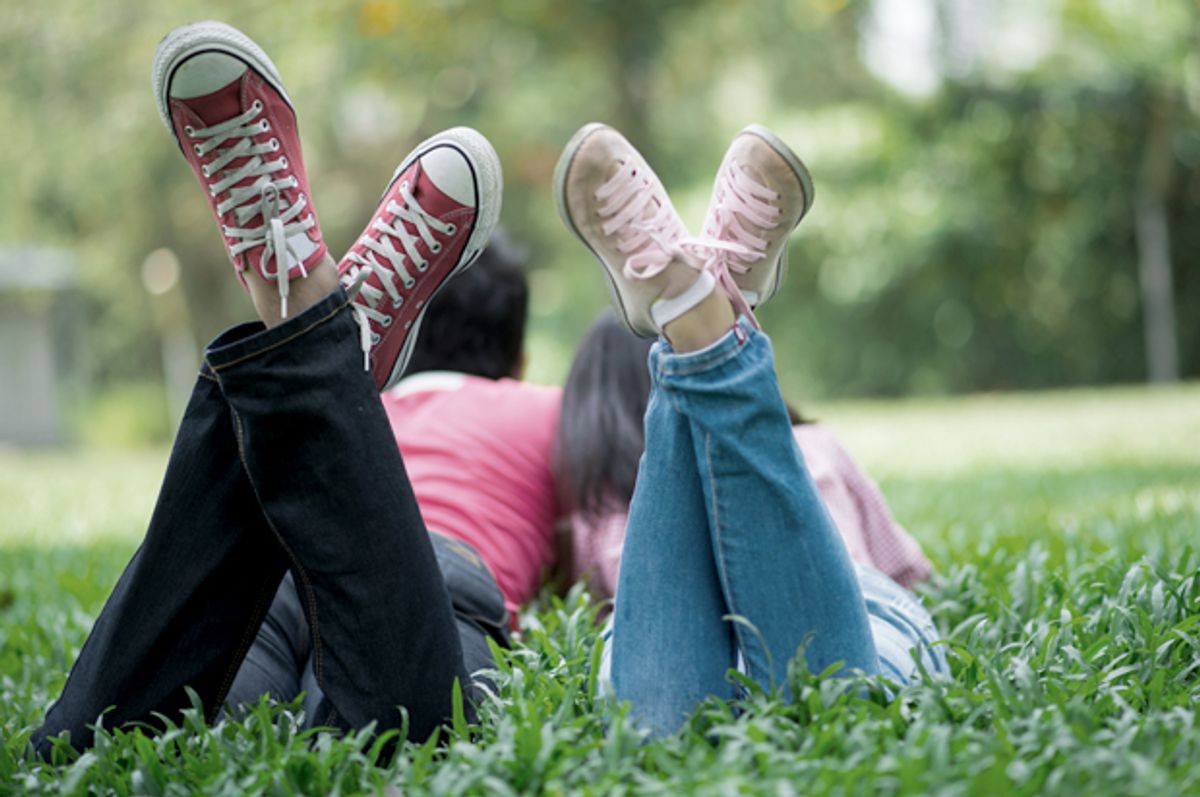 On my second date with Rachael, she said, “So, tell me about your friends.”

This was the conversation I’d worried about since I’d started dating again. Not my divorce, not my son. I looked at the slice of meatball pizza folded in my hand. Then I took a bite. Chewing would buy me some time.

I didn’t know if Rachael was the jealous type. We met on OkCupid after I sent her a funny message about how bonobos cope with depression, and here, in this packed pizzeria, we joked as if we’d been dating for years. She gave me a hard time for only getting my license this past August, at 32, and I told her if she complained too much she could walk home. Or maybe if she showed a little leg the guys at the table beside us might give her a lift. That made her laugh so hard she almost choked on a chunk of meatball.

Still I wasn’t sure I could be completely honest. I didn’t want to tell Rachael that my best friend was a stay-at-home mom named Stacy. My last girlfriend, Michelle, had been suspicious — even after I told her Stacy was engaged. Whenever I talked about her, Michelle’s eyes narrowed, and she looked at me warily, as if she were reading the fine print on a contract that already had her signature.

“Stacy wants to sleep with you, you know,” Michelle said.

“Why else would she spend so much time with you?”

“The same reasons my guy friends do.”

Now, after Rachael had asked a typical second date question, I stammered. I told her about my college buddies, Carlos and Chris; my writing partners, Steve and Ruben; my dad friend, Ross. Then I snuck it in at the end, “Oh, and Stacy.”

When she didn’t say anything, I got nervous. “It’s not like that,” I said. “She’s practically married.” And then, without even thinking: “Her fiancé thinks she and I are soul mates.”

Rachael winced and dropped her pizza on the plate.

“Soul mates. And you haven’t had sex with her?”

“No, we’re just friends. Besides, I don’t even believe in soul mates.”

I took another bite of my pizza, knowing I probably ruined any chance of a third date. All I wanted to do was text Stacy and tell her about it. I already knew what she’d text me back: You dummy!

About a year before my second date with Rachael, in June, my 2-year-old, Mason, and I were at the park where we met Stacy and her son Nick. As a single father, it was rare when any of the moms spoke to me. I assumed they thought I was going to hit on them. All I wanted was to talk to someone who wasn’t going to wipe their boogers on me.

Stacy was different. We struck up a conversation right away and had an instant connection, but it wasn’t romantic or sexual. It was the same connection our boys had, who’d spend the next two hours taking turns on the slide and searching under trees for sticks together.

When it was time to go, Stacy pulled out her phone and said, “We should have a play date. What’s your number? I promise I’m not hitting on you.”

Nearly every Monday and Wednesday since, the four of us have met for play dates at the park, the zoo, or each other’s apartments. The boys play while Stacy and I have the kind of conversations we couldn’t have with our toddlers, about our pasts and presents, our hopes, and our anxieties.

But the world didn’t respond to our friendship with such ease. The old adage says friends make the best lovers. Harry and Sally, Carrie and Big, Zack and Miri — we see it on TV and in movies all the time — and everyone seemed primed to believe it. As Harry famously said of opposite-sex friendships, “The sex part always gets in the way.”

When my ex said Stacy wanted to sleep with me, I got irritated, and we had an argument. At the time, we were on a date, drinks at “our” bar. I drained my beer, said we should go. The whole ride back was silent. I didn’t understand why she couldn’t believe a man and a woman could be friends, just friends.

The doubt in Michelle’s voice wasn’t a finger-pointing accusation, more of a dumbfounded astonishment at why Stacy and I hadn’t had sex already. All that time, that texting, why wouldn’t we?

One night when I was having beers with a guy friend, he tried to level with me after I told him I’d bought Stacy one of my favorite books for Christmas. “I know you think you’re just friends,” he said, “but it sounds like you’re a couple without the sex.”

Naturally, I turned to Stacy to make sense of it. What was going on — were we in denial, or did the world have this one wrong? Never before had Stacy and I ever discussed what it would be like if we dated. It was a hypothetical we didn’t entertain. She was like an aunt to my son, and I was like an uncle to hers. When I finally brought it out in the open, it was all we could talk about — not what it would be like to sleep with each other but gossiping about old flames.

My feelings for Stacy aren’t the puppy love, can’t-stop-thinking-about-you kind I had at one time for my ex-wife or my last girlfriend or what I was starting to have for Rachael after our first date. They are deeper but more casual, the kind where we can have an intimate conversation about our dysfunctional families and in the middle of that make fun of each other. As we’ve gotten closer, my affection for Stacy has grown to the point where I can’t imagine my life, or my son’s life, without her.

My last girlfriend’s insecurity about Stacy drove us apart. “When we break up, you’ll end up with Stacy,” she’d say when she drank too much. Or: “Stacy’s so pretty. Haven’t you ever thought about what it would be like to sleep with her?” What little she understood about our friendship she’d twisted into a knot I couldn’t untangle.

I get it. My feelings about opposite-sex friendships used to be presumptuous and outdated, too. That just showed I had a very limited idea of intimacy. Closeness doesn’t have to equal sex. A deep love can come in many varieties.

After my last girlfriend and I broke up, I was inconsolable. I knew the relationship was over, but I believed I might never find someone again. The person there for me the most was Stacy.

The whole night Stacy texted me until I fell asleep. She checked in on me that morning and every day after and the following weekend came over for beers. Soon I was dating again. It was Stacy who gave me advice on what to wear, where to go and what to say — and what not to say.

Three months have passed since my second date with Rachael, and she’s now my girlfriend. One night, after we’d been together for a month or so, she got upset that I was texting with Stacy. She didn’t say Stacy was in love with me, or that I was in love with her, but she admitted she was jealous. “You have a connection with her that I want you to have with me,” she said.

I have failed at love enough to know that it’s still too early to tell if Rachael and I will be together forever. If we are, we may have that kind of connection, and if we aren’t, I know Stacy will be there to buy me a beer and call me a dummy.

If I did believe in soul mates, that’s the kind I’d want.

Brian McGuigan's writing has appeared in Gawker, The Rumpus, Salon, ParentMap, and elsewhere. He’s the co-founder/curator of the reading series, Cheap Wine & Poetry and Cheap Beer & Prose, and the director of Lit Crawl Seattle. Currently, he's working on a memoir. For many years, he worked at Hugo House.