Women don't have "maiden" names: A modest proposal to retire the descriptor

The antiquated term carries all kinds of sexist connotations. Its continued usage is more political than we realize 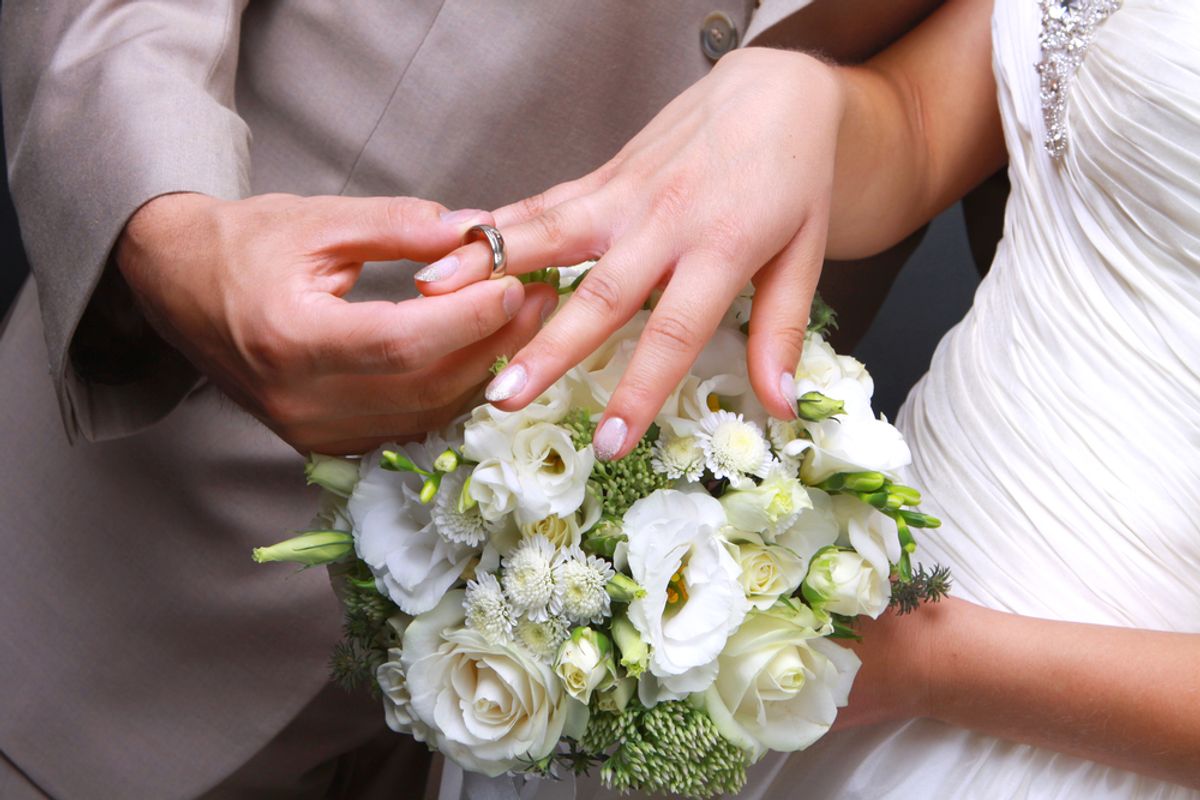 Last weekend the New York Times published an article about women and marriage and names—a perennially complicated topic that touches on matters of family, identity, feminism, and choice. The piece, by Claire Cain Miller and Derek Willis (more on their names in a minute), states that more women are opting not to take on their husbands’ surnames upon marriage, instead keeping their original names—about 20 percent, they report.

I really hated the article. My quibble isn’t with the data (though 1,385 people does seem like a small sample), nor with the fact that the Times seems to trot out a new version of this piece every other year (usually corresponding with wedding season). And it isn’t particularly personal—I chose to keep my name through a first marriage, a divorce, and a second marriage. Most of my friends have done the same; at the same time, a few have taken their husbands’ names, including my very feminist and beloved stepmother. I’m not interested in judging anyone’s choice.

More from DAME: "Debauchery is Fun -- to Visit"

My problem has to do with the words used to describe it.

Let’s start with the Times’ use of the outdated, thoroughly sexist, actually-kind-of-offensive-if-you-think-about-it term “maiden name.” The word itself—maiden—is an old one, carrying a constellation of meaning: young girl, unmarried girl, virgin. Its meaning of “doing something for the first time” is most commonly applied to non-human entities—we hear of a ship’s maiden voyage, a horse’s maiden race. But when applied to people, it reminds us of one thing: that marriage as an institution once demanded a virgin bride who was handed from her father’s house to her husband’s, and that the name she had worn since birth was discarded along with her virginity upon the occasion of her wedding day.

We hear about maiden names when the bank asks us for a security question, and we are reminded that our mothers had a life before we were born. And we hear about maiden names when we read an article like the one in the Times (or this one, or this one) that trumpets any change in the dismal statistic that the vast majority of women (no matter how old, or how non-virginal) still dump their names upon marriage.

So, a modest proposal: Let’s retire the term. No matter what choice a woman makes upon marriage about keeping, discarding, or modifying it, the name a woman brings into her marriage is not her maiden name; it is her name.

The other word I think the Times gets wrong is “political.” The article leads with a personal story:

When Donna Suh married in September, wearing a short white dress at San Francisco City Hall, she decided to keep her last name. Her reasons were practical, not political.

“It’s not necessarily a feminist reason, but it’s just my name for 33 years of my life,” Ms. Suh said. “Plus, I’m Asian and he’s not, so it’s less confusing for me to not have a White name …”

Leaving aside this woman’s equivocation regarding feminism, her reasons for keeping her name are that a) it’s her name and b) it represents something of her own ethnic identity. In a society in which more than three quarters of women still change their name upon marriage, often erasing one visible marker of their ethnicity and history in doing so, how is this anything but political?

More from DAME: "I've Always Had a Thing for Hillary's Austere Pantsuits"

What is more political, after all, than a person’s identity and how they choose to define it?

It’s easy to see the politics involved (however subconsciously) when you read the comments that follow the Times article (and all those like it). There’s a kind of sameness to all the comment sections on the topic; as in real life, a sizable minority of women will write about how they kept their name and feel good about it. A smallish group of women (and some men) will write nasty letters about how there’s no point in getting married if you don’t take your husband’s name (these are often angry letters you’d like to ignore, until you realize that they’re written by folks who could be your future in-laws).

In the middle is the largest group: women who changed their names upon marriage (because remember, most still do) and want to explain why. The most common reasons are:

We decided we wanted one name and somehow his was just better.

This argument would carry so much more water if “his was just better” didn’t win 99 percent of the time.

He cared and I didn’t.

Have you ever wondered why that was the case? What if you had cared? How would you have decided?

Why do names even matter? You are still you, no matter what your name is.

I find this argument unconvincing and even ludicrous; I also have never seen a man say that his name didn’t matter.

If you have a different last name from your kids, how will they feel about your attachment?

I am so firmly attached to my children I can sometimes barely escape them. And yet they both have different surnames than mine.

My maiden name was just my father’s last name anyway. What difference does it make?

This one is usually offered as if it’s a brilliant riposte that hasn’t already been offered by a dozen others. It also makes no sense at all. No matter how your name arrived when you were born, hasn’t it been your name your whole life? Why do you feel differently about it than a man might, who may also have gotten his name from his father?

I didn’t change my name. I just made it my middle name.

More from DAME: "Is It OK to Want a Dominant Male Partner?"

This is why so many women have three names these days, à la Hillary Rodham Clinton. And I agree it’s kind of dashing and cool. I also understand that for a lot of women it’s important to publically assert that they are married, and one way of doing that is to use three names. I assume that’s why one of the Times article’s two authors has three names (the woman), while the other (the man) has two names.

I just use my married name socially and my maiden name professionally.

I can see the wisdom of this, to a point—although I have never changed my name, I don’t pretend not to understand when a hotel clerk calls me by my husband’s name. Still, the way we live our lives now, few of us enjoy such a strict division between our social and professional lives. It is simply unsustainable to try to use two names—nowhere is this more confusing and frustrating than in email addresses, wherein someone else will have to decide if your name is the one in the “from” field or the name you signed or some further variation. Please, pick one name you like to be called and move on.

Everyone should feel free to make their own choices about names. But what I’ve noticed is how many women still feel vaguely bullied into making the “choice,” and then regretful and resentful afterward (hence the tortured justifications).

I’m not saying it’s always easy to figure things out—especially if kids are going to be part of the picture, there is always a question about how to handle names. One way forward can be found in looking at marriages where both partners are the same gender. Absent the societal pressures placed on hetero marriages, those folks have had to figure out on more egalitarian terms what they want to do with the issue of names (for themselves and their kids). If more men and women approached the topic with a wider range of possible outcomes—not “will she or won’t she change her name,” but rather, “what will each partner do for a name, post-marriage”—then maybe we would see more choice, more equality, and more happiness, in this most political and personal of decisions.