You Must Hear This! Rhetta Hughes' "Gimme Some Of Yours" 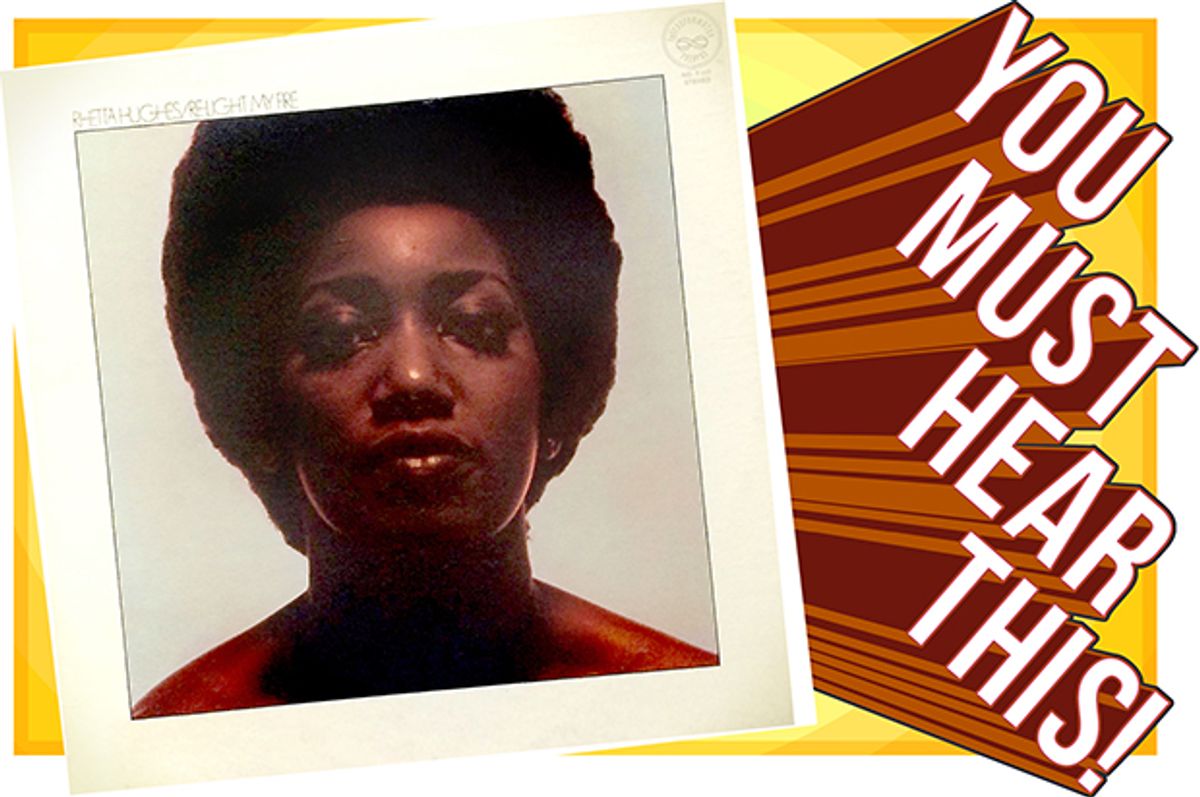 This song will hook you before Rhetta Hughes even starts singing. That drum beat that somehow manages to be both tight and loose... the simple guitar line played by someone who really knows how to bend a string (enough to not quite get there)... By the time Hughes' sweet, confident voice tumbles in, you already know you're in good hands.

It's not a terribly complex song, but everything fits perfectly. With impeccable production by Mike Terry and Josephine "Joshie" Armstead, it feels instantly familiar, but also takes a few turns you weren't quite expecting. Armstead wrote the song specially for Hughes, during the recording session. Somehow.

Rhetta Hughes and I spoke on the phone, and the following has been edited for length and clarity:

Let's start back before the album came out.

I learned everything about singing and music from Tennyson Stevens. Tennyson was an organist in the Jimmy Smith style. I was a church person. I was a Licensed Vocational Nurse, and my entire life was the church and Parkland Hospital – the hospital where Kennedy died.

In my church, my choir rector asked me to go to this nightclub where Tennyson played, because they wanted him to play for our choir. They said, "go over there, you know him – you go get him out of that den of iniquity!" So, sure enough, I was working a three-to-eleven shift, and I got off, still in my whites, and I went to this little club. It was this shotgun house that they had turned into a club. And this club was where the elite of the day went. The railroad workers or car salesmen or postal workers – those were the elite of the black community. (laughs)

So, I went and I knocked on the door, and this guy slid the little thing back and said, "Yeah?!" I said, "I'm looking for Tennyson Stevens?" He opened the door, and Tennyson said, "ladies and gentlemen, there's a wonderful singer coming into the room right now! If you give her a round of applause, I bet she'll sing!" Oh shit! I had never even held a microphone or sung in a club or anything! Anyway, I made my way across the room, and I said, "Tennyson! I don't know anything to sing!" He said, "you know 'Summertime!' Here, take the mike!" When I finished, the whole audience went crazy.

And you were hooked?

Yeah. They wouldn't let me sit down. The crowd went crazy, what could I do? Thirty people in there, and yeah, that hooked me. That was the first time I had ever been applauded... appreciated... it was just the first experience I had of anything like that. Because people didn't applaud in church in those days.

How did your church feel about the fact that you didn't come back from that club?

Oh, I never did look back at the church. One night, while I was singing in the club, I had to fight off my pastor, who came to my door. And two or three hours later his son came to my door. You know what I mean. So that was the end of church for me, right there. I said, "no... something is rotten in the cotton here! This isn't right!" Somewhere I just began to realize that this church hellfire and brimstone – something ain't right here. Show business is much more of a church for me than that. I never did look back.

Did everybody in show business treat you well?

Oh, of course not! If you don't know shit from chocolate, you don't know what decisions to make or what's right and what's wrong. I didn't know anybody in show business – neither one of us did – we were ripe for the picking! We learned everything the hard way.

How long after that did you record the album

That would have been maybe three years. We sang in this club, and we became the hottest local duo around Dallas. We went after that initial night and bought every record we could find and we copied everybody from Lambert Hendricks & Ross to Dakota Staton to Nancy Wilson – whoever we could get our hands on! And of course I wanted to leave nursing at that point anyway, I was just looking for a way out. I immediately stopped nursing, and just devoted full time to singing and learning, singing and learning, and copying other artists. I had no show business background, so I didn't know what to do. Both of us. Tennyson had learned to play piano because his mother was a maid for some very rich white people and she would take him to work, and he taught himself to play.

We were working in Vegas, we were maybe two, three years old then, and Red Fox was at our hotel, down the way. Our little engagement was coming to an end, so I went walking down there, and waited by his dressing room, and I told him, "Me and my partner, we have an act, and you have a club in L.A. and we'd like to come work for you." He said, "Oh, OK." We went to L.A. and he hired us to work in his club. And a who's who would come into that club. Bill Cosby came into the club and saw me, and signed me to his label [Tetragrammaton Records], and that's how it began.

Let's talk about "Gimme Some of Yours."

That song was written by Joshie Armstead, who was so talented. She wrote "Let's Go Get Stoned" for Ray Charles, along with Valerie Simpson and Nick Ashford. She's a really talented person. I knew her – I knew she produced, and wrote songs. But anyway, I was in California, and had just signed to Tetragrammaton, and they asked me, "well, OK, we've got to find you a producer." And I thought, "oh, what a nice chance to give a black woman a chance to produce." So, I got them to get in touch with her, and sure enough!

I went to Detroit, and she introduced me to Mike Terry, the arranger. It was really a learning experience for me because up to that point it had been jazz, you know, the Playboy circuit, and we had a manager who only thought about us being in saloons, singing and that sort of thing. So it was quite a jump for me to jump into pop or R&B or whatever you would call it.

What do you remember about the recording sessions?

They were a learning experience for me. I learned what belting was about, or hitting high notes full force was about – from watching Joshie. Joshie had, in her earlier days, been a backup singer for Ike and Tina Turner. And I was coming from jazz, you know – ballads. Trying to learn the Frank Sinatra songbook, or Judy Garland... So, she was another animal for me, and I just watched and I listened and I learned. I've always had this ear, and I can soak up whatever it was – if it was opera, and it was going to pay me a dime, I would try it. If you were offering me a job in Poland and it was a round trip plane involved? I'm going.

"Gimme Some Of Yours" is a pretty risqué song! Was that an issue at all at the time?

I have to ask about Bill Cobsy and the allegations.

I went on tour with him. After I made the album in Detroit, I came back, and I was walking around the office, and I passed his door and he was sitting in a barber's chair inside, and a barber was cutting his hair. So, I stuck my head in and said, "Hi!" He said, "Hi. What you doing?" And I said, "I'm rehearsing so I can go out on the road with you!" And he said, "You want to go out on the road with me?" and I said "Yeah!" He simply reached over and picked up the phone, and said, "Hey. This is Cos. Put Rhetta Hughes on that college circuit. OK, bye," and hung up. Boom. I'm the opening act for Cosby.

Was it odd being a musical act on a comedy bill?

It was a college tour, and it was just Cosby on stage. But there began to be bad blood between me and Tennyson. I realized years later Tennyson was jealous. He didn't understand why Cosby didn't see us as a team. I guess he just felt terrible, and I could understand it years later. Once he just didn't show up at a concert of maybe about four thousand people, and I remember Cosby, he says, "Rhetta, do you want Herbie Hancock? You name it, I can get you anybody. You don't have to stand up and sing a capella." But I was of course conflicted. I was just, "Well... he's my brother." We weren't sister and brother, but we told everybody we were sister and brother because frequently in the very beginning we had to sleep in the same bed. Tennyson was gay. But in that day, you didn't tell anybody you were gay. I never had a problem with a gay person, I considered a gay person to be like me or anybody else.

You were ahead of your time, I think.

I guess so! Having worked so closely with him, I didn't see any difference. I didn't see that that was something you blamed somebody for. I just didn't understand [that], and I don't to this day.

Rhetta Hughes currently resides in Dallas, where she takes care of her mother full-time.