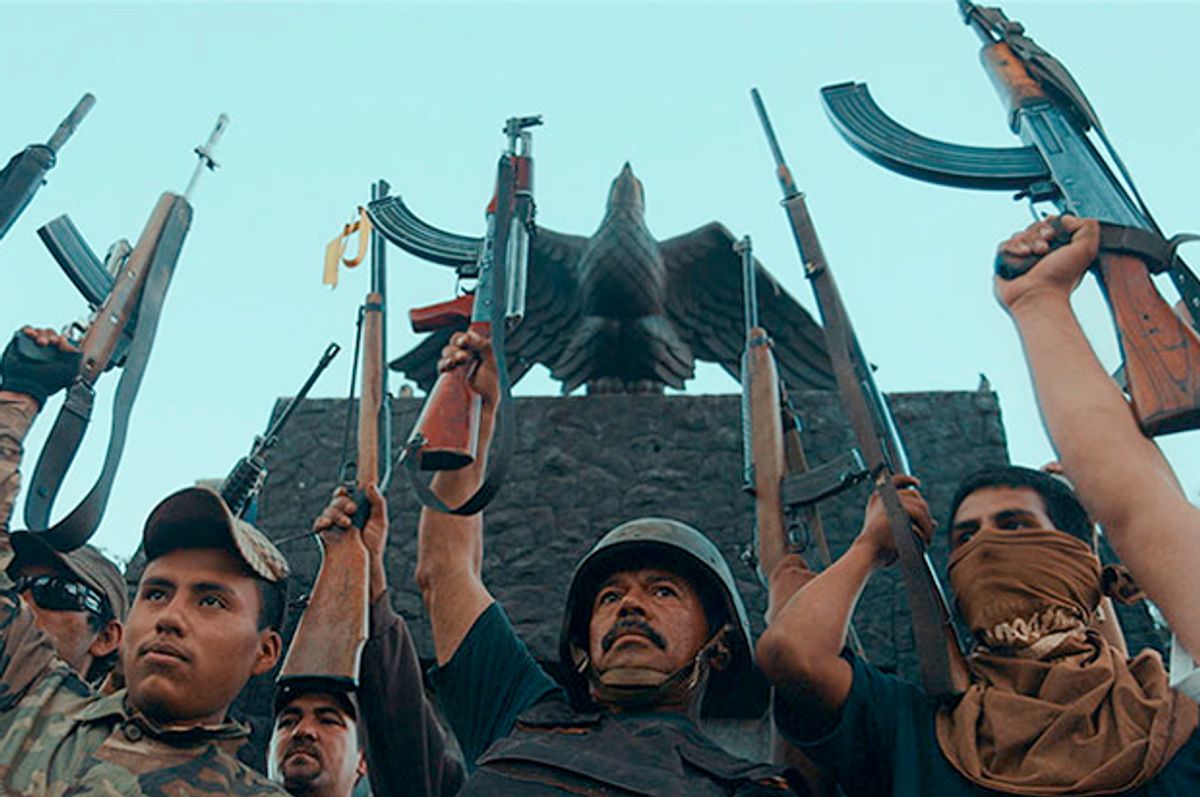 Vigilantes of the Autodefensa movement celebrate the "liberation" of a town in the Mexican state of Michoacán, in a scene from "Cartel Land."
--

Everybody becomes corrupt sooner or later, muses a bandanna-wearing philosopher, in the middle of the night somewhere in the Mexican state of Michoacán, toward the end of Matthew Heineman’s unsettling and sometimes terrifying documentary “Cartel Land.” This guy has a reflective and almost mild demeanor, but it’s true that he is wearing the bandanna over his face, carrying a semiautomatic rifle and cooking up an enormous bubble-and-boil batch of crystal meth in blue plastic chemical drums. Whether those facts invalidate his insight into human nature is up to you. (There are further facts about him I will not reveal.) What he says serves as a fitting epigraph or central maxim for “Cartel Land,” which surveys two different frontiers of the disordered relationship between Mexico and the United States without trying to deliver moral lessons.

Maybe the first thing to say about Heineman is that he has a crucial attribute that’s very helpful for documentary filmmakers – he is apparently out of his freakin’ mind. He interviews meth-cooking gangsters in the middle of the night, in situations where if he and his crew were shot and chopped into pieces, it’s probably 50/50 that they would ever be found. He stumbles into a shootout with the Autodefensas, a heavily armed vigilante group who go from village to village across Michoacán, driving out the notorious drug cartel known as the Knights Templar. (Seriously, the Knights Templar! Was some Mexican drug lord, like, a big Dan Brown fan?) A thousand miles or so to the north, he patrols the rugged terrain along the Arizona-Mexico border with a blue-eyed militia-type dude known as “Nailer,” who seems only intermittently connected to reality.

Somehow or other, Heineman also convinced José Manuel Mireles, the suave 60-ish physician who founded the Autodefensas, to wear a mike in all sorts of situations where he shouldn’t have. So we see Mireles playing with his grandkids at the pool and offering medical care at no charge to poor children, and then we hear him telling his subordinates what to do with a suspected Knights Templar soldier captured at a checkpoint (it isn’t something good), and instructing his 20-something girlfriend exactly how to please him. All of that speaks to the central truth of interviews, understood even by journalists like me who conduct them in comfortable hotel suites: Fundamentally, people want to feel understood, and are aching to tell you their secrets. Nailer, whose real name is Tim Foley, comes across as something of a lost American soul, a survivor of childhood abuse and former drug addict who now runs an impromptu militia called Arizona Border Recon, which is listed as an extremist group by the Southern Poverty Law Center. (Not like that’s the letter of the law or anything: The SPLC has a noble mission but is not much given to subtlety of interpretation.)

Many viewers of “Cartel Land” have observed that the sections of the film about Mireles and the Autodefensa movement are stronger than those dealing with Nailer’s band of Arizona misfits. That’s true enough, but in some larger sense I feel Heineman driving toward a relationship or parallel between them and not quite getting there. One aspect of this is that both men are seeking a moral clarity, a well-policed boundary between right and wrong, that is not likely to be found in the murky realm of Mexican-American commerce, crime and politics. I read the title “Cartel Land” as referring to a much broader context than the influence of Mexican drug gangs, although Heineman never directly alludes to that. Some cartels are legal and others are not, but the tendency of corporate capitalism to establish its own subjective moral code, and seek to invade or control the organs of the state, is not limited to organized crime.

In the context of the semi-failed Mexican state and widespread corruption among police and politicians, Mireles became a huge celebrity and an immensely controversial figure. As we see early in the film, townspeople in Michoacán sometimes banded together with the Autodefensas and drove the cops and soldiers out of town. Mexico’s current president, the irredeemably slimy Enrique Peña Nieto, was obliged to go on TV and promise a return to the rule of law, essentially admitting that no such thing existed. His governing party, the PRI, has long been assumed to work hand-in-glove with the drug cartels, who after all employ thousands of people and produce Mexico’s most profitable exports. It’s not at all clear where Mireles might fall in ideological terms, but his appeal is that of the traditional Latin American strongman, or the fascist leader more generally: The incorruptible figure who embodies the popular spirit, stands above politics, and resists all forms of decadence.

Someone like Nailer, on the other hand, is an outcast within American society, and his fans and supporters are by definition other outcasts. While he sees the United States as a failed or failing state, unable to secure its borders or prevent the Mexican cartels from flooding our cities and suburbs with cheap meth, coke and weed, most of us don’t experience it quite that way. Based on the only interview I’ve read with Heineman, he appears to sympathize with both Nailer and Mireles somewhat more than the left-leaning North American documentary audience is likely to, but I’m not sure how much that matters. Heineman doesn’t pull his punches: We see how rapidly the Autodefensa movement tips over from understandable citizen outrage into looting, brutality and theft, to the point where vigilantes become barely distinguishable from gangsters, and how thoroughly Nailer’s mini-movement is infused with racism and black-helicopter paranoia.

If the ambiguity of these stories may frustrate some viewers – we long to be clearly told which of these people are good, if any, and which bad – that is the ambiguity of the world, the ambiguity addressed by Heineman’s Michoacán friend with the bandana and the AK-47. If you can look past Nailer’s more noxious attitudes and what we may see as his inability to grasp the larger cultural and economic picture, he’s almost an innocent, convinced that he is fighting nearly alone on the front lines of the struggle between good and evil. (He is good, he helpfully explains; the cartels are evil.) Nailer has not been corrupted, to turn the old proverb upside down, because he is powerless. The meth-cooker, on the other hand, has seen too much of the world and worked both sides of the law. He doesn’t pretend that what he’s doing is noble or virtuous but has tasted enough power to understand how little that matters. “We are the winners,” he says ruefully. “For now.”