Stopping rape is a laughing matter, but men's rights is very serious business 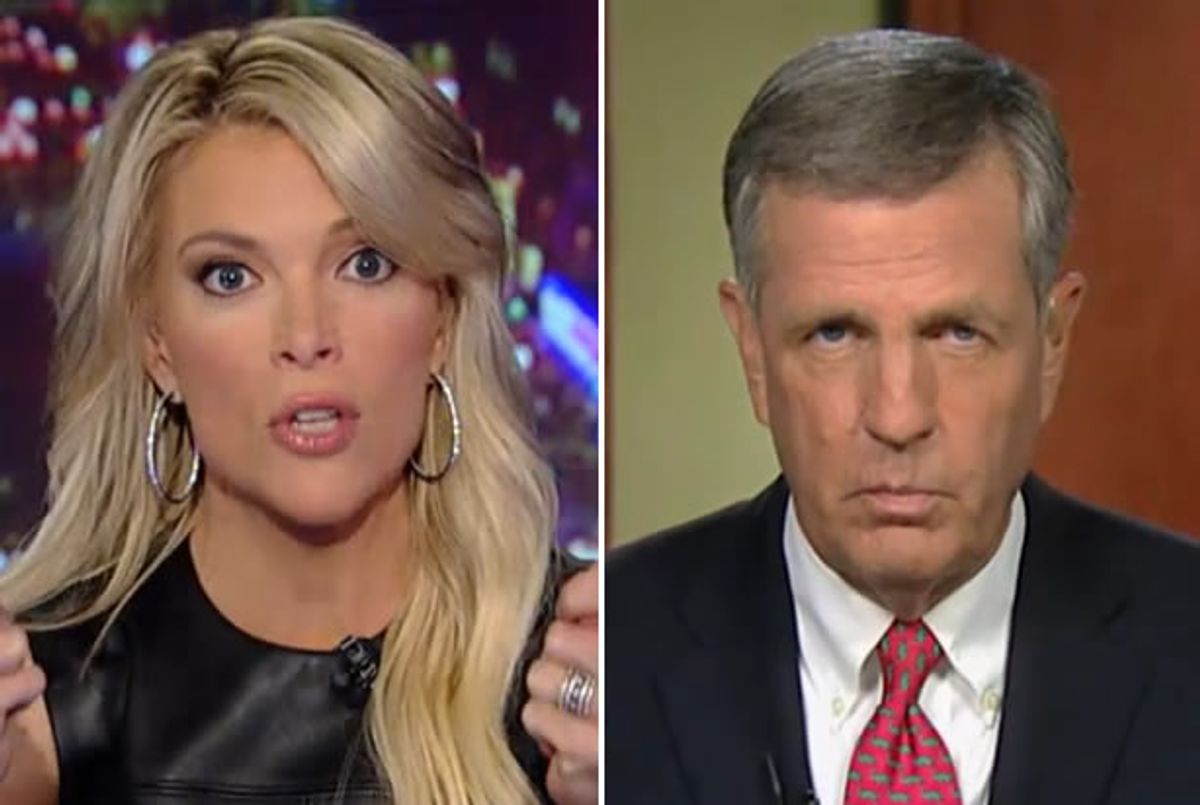 The law is intended to reduce the number of sexual assaults on college campuses, which Kelly confessed at the outset was a laudable goal. However, the segment's tone quickly turned south, as Kelly started joking about the "Contract Card" that the Affirmative Consent Project created, reading with gusto the contract's stipulation that both parties agree to have to sex. The response to her interpretation of the contract was, in her own words, "applause in the studio," and someone off-camera can be heard laughing.

Kelly introduced Brit Hume to segment, laughing as she said, "well, it's come to this, Brit."

"It suggests that the people who are drawing up these new plans for how consent should be given have never had any sex," Hume chuckled out. "You don't want to have to stop each step of the way to give each other bulletins about the level of your consent."

Kelly could hardly contain herself, putting her hands to her face as she laughed while Hume droned on about the "re-regulation of sex," a development about which it is difficult to tell how Hume feels.

When he was in college, he said, "there was a recognition of the fact that, as you might have put it back then, ‘boys will be boys’ and guys are pretty lusty, and you needed to be careful when you got them around young women, particularly if there was parties and alcohol, so the rules were pretty tight."

But the sexual revolution supplanted that, and led to what Hume called "hook-up culture," which Kelly agreed was a bad thing. "Just take a look at Spring Break across this country!" she said.

"Now what we’re seeing is, because people particularly don’t like some of the results of that, they’re trying to re-regulate it, and that’s where we are," Hume replied, which given the admonishment of the hook-up culture that just occurred seconds earlier, would presumably be a good thing -- even though the pair of them spent the first half of the segment joking about it.

Tellingly, the one thing Kelly and Hume didn't joke about was the effect that such regulations could have on men. "We are going in a direction where we almost entirely eliminate the rights of men," she said, "and there’s a presumption now in these campuses, thanks to the Obama administration, of guilt."

"There’s a presumption of non-consent," Kelly continued, "and if you are a young man who gets accused, it’s your burden to go in there and prove consent, and we’re getting to the point where you have to have a contract -- and if you don’t, you’re gonna be presumed a rapist."