Yet again, the former Food Network star is in the spotlight for precisely the wrong reason 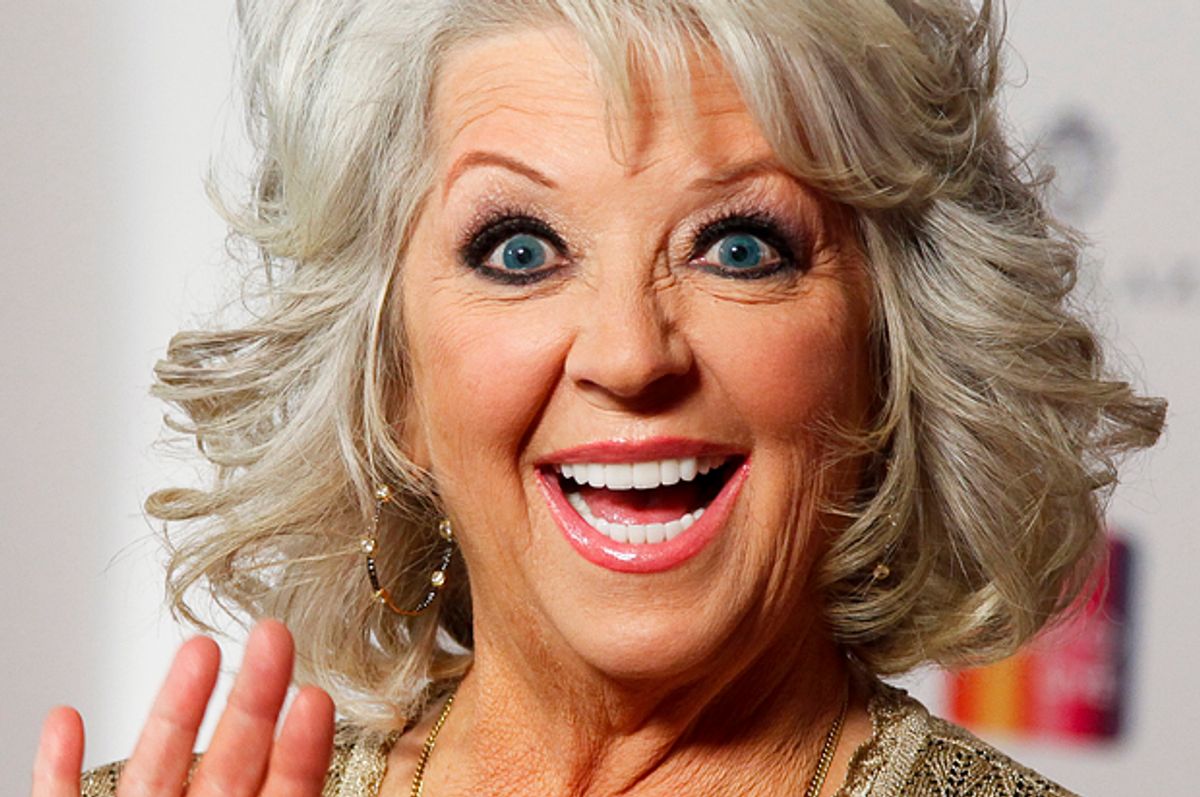 Yesterday, former Food Network star Paula Deen tweeted a picture of her and her son Bobby dressed as Lucy and Desi Arnaz. Bobby is made up in brownface, presumably as a gesture towards Desi Arnaz’s Cuban heritage. It is unclear to me why Deen felt sending such a tweet to be in any way reasonable, given that she was fired from her show on Food Network in 2013 after after her long history of racially discriminatory treatment of employees at her Georgia restaurant, The Lady and Sons, came to light.

An avid fan of Deen’s cooking during her tenure on Food Network, I have also visited her restaurant. My go-to recipes for peach cobbler, monkey bread, and chocolate gooey butter cake are all recipes I learned from watching Paula Deen. I was perfectly willing, until her remarks came to light, to engage in a regular suspension of disbelief about the racial proclivities of this jolly Southern white woman, because I too enjoyed her illicit jaunts into decadence and her embrace of butter, in a world where everyone is obsessed with olive oil and quinoa.

However, the tweeting of this picture indicates that a negligible understanding of American racial politics is a multigenerational problem in the Deen family. As I scratch my head trying to figure out in which universe sharing such a picture is reasonable, especially given Paula’s public fall from grace, I wonder if Bobby Deen’s offensive racist act points to a larger need within our ongoing national conversation on race to recognize something glaringly obvious: Racism in the U.S. is not just a Black and White problem.

Scores of Latino sociologists, historians, political scientists and other scholars of color have called for scholarly and political conversations on race and racism to move beyond the Black/White binary. I have always been skeptical of such moves, because depending on who makes them, sometimes such calls seem to be far less about highlighting how broad the destructiveness of white supremacy is, and far more about suggesting that Black people take up too much space in public racial discourse. One specific reason that I don’t advocate moving beyond the binary is because in many ways, the particular modes in which Black life are denigrated become the kind of script by which other racial groups are denigrated, too. Brownface in the Americas, particularly as enacted among Southern white people, must be understood as part and parcel of a longer history of Blackface, as a form of cultural performance whereby white people seek to work out their anxieties about racial identities that differ from their own. Antiblackness is the ur-text of other forms of racial animosity.

Even so, this political moment demands that we think robustly about the systematic and unfair treatment of Latino Americans as well. The Obama administration’s appalling record on deportations of undocumented Latinos is one of the most visible and distressing black eyes on the president’s record. Unarmed Latinos are also shot and killed by police in alarming numbers. Earlier this year, police in Washington state killed unarmed Antonio Zambrano-Montes, who after throwing rocks at the police, turned and ran with his hands up. Latino communities have a litany of names of unarmed young men –like José Antonio Elena Rodriguez, Andy Lopez, David Silva, and Reynaldo Cuevas -- shot and killed by police that should raise our concerns as much as the litanies of numerous Black lives taken by police that we are wont to recite.

I believe that Black bodies and lives remain the most significant threat to a system interested in upholding white supremacy. However, all non-white identities become a threat to the white dominance of the status quo.

When we are treated to gleeful cultural performances of Black and Brownface, these are attempts to sanitize and make palatable those aspects of non-white identity that feel threatening to white people. To be clear, many white Americans patently reject the kind of gauche, indelicate ways that Southerners like Paula Deen and sons negotiate racial politics. Such forthright offense grates on the sensibilities of those who no longer believe that Black and Brown people are here for the cultural and social amusement of White Americans. Paula and Bobby Deen’s photo indicates the kind of non-whiteness with which they are most comfortable. Simultaneously, it demonstrates that skin color is never as incidental to identity as liberal notions of American progress would have us believe.

Southern whiteness offends white liberal progressive sensibilities in the same way that one’s offensive, racist aunt or uncle embarrasses you when you bring your friends home for a visit. Thus liberal and progressive white people continue to try to distance themselves from these clearly problematic racial politics, by shaming and denouncing overtly racist acts.

The problem is that this keeps attention focused on the individual rather than the systems, institutions and cultural practices that produce and sustain such thinking. As every Southerner knows, you have to pull up kudzu and any other kind of weed at the root. Kudzu is a colonizer. If you cut it down, without rooting it out, it grows back thicker than ever. Dylann Roof has a family. Paula Deen has a family. Your racist aunt and uncle have a family. And you are in it.  None of these people exists outside a familial and cultural context that shaped and produced what seem to them to be acceptable racial behaviors.

Casual racism, the donning of Brownface, the flying of Confederate flags, the embrace of misleading racial mythology, is still broadly acceptable throughout the U.S., despite what public outrage about these acts might suggest. This is why these practices persist. We, therefore, have to stop asking why Paula Deen thinks her acts are reasonable, and start asking what about our cultural context signals to her that they in fact are reasonable. What about our cultural context affirms for her that such thinking is entirely acceptable? What about our current cultural context helped Dylann Roof to believe that his heinous acts would – in robbing the world of nine God-fearing, Christian people –rid the world of nine rapists, come to “take over everything?”

By turning our attention to the ways that white supremacy devastates other communities of color alongside Black communities, we position ourselves to see fully white supremacy in all its machinations. A framework that centers Black lives does not preclude such analyses. It beckons them. For if other lives are unsafe, Black lives are surely unsafe.

The vast reach of white supremacy’s destructiveness means that we must continue to work towards racial frameworks that provide grounds for strategic solidarities. This will not be easy work. I hope Bobby Deen’s show, which still airs on the Cooking Channel, is also yanked from the network, and that the Deens will go away quietly. But even when they are out of sight, the racist contexts that produced them will still be very present. And we will have to figure out what to do with all the delicious recipes they are leaving behind, too. I can tell you, for sure, that the peach cobbler and chocolate cake recipes are coming with me.