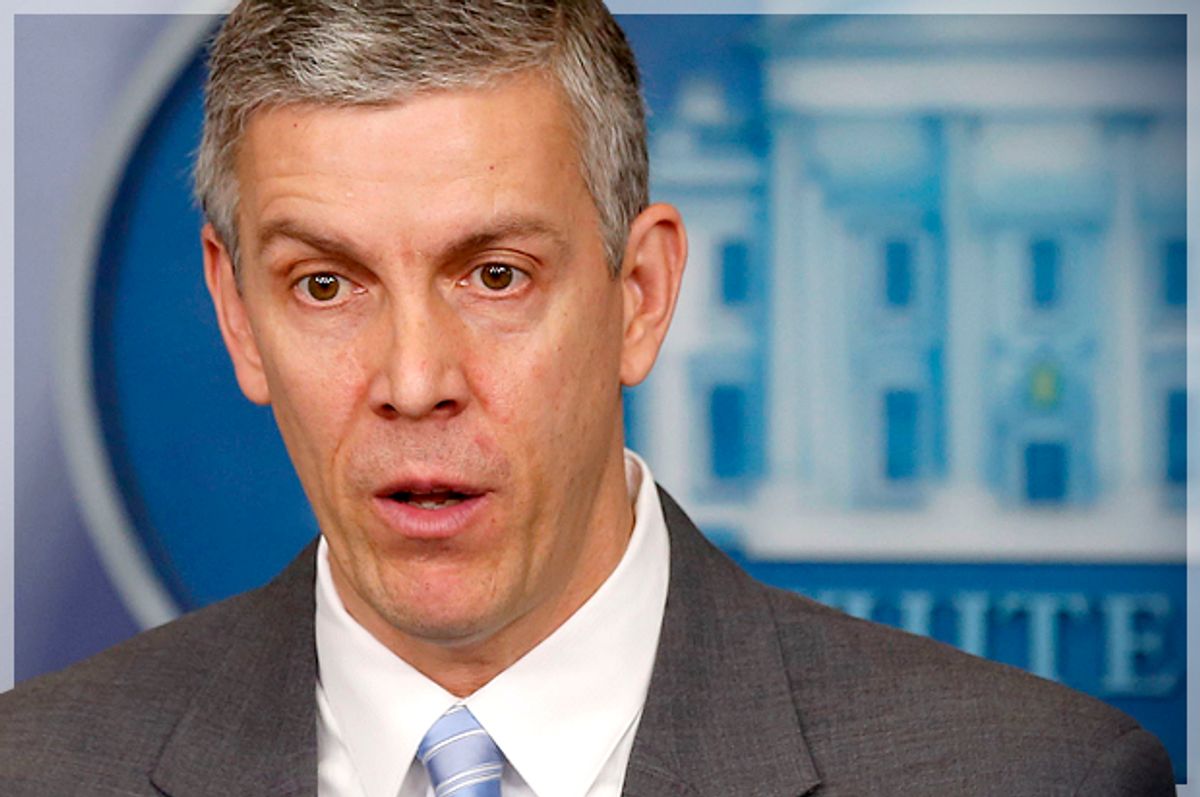 Lyndsey Layton of the Washington Post has written a sympathetic article about Arne Duncan and the waning of his powers as Secretary of Education. He is a nice guy. He is a close friend of the president. He cares about individual children that he met along the way. The pending reauthorization of the Elementary and Secondary Education Act will prohibit him and future Secretaries from interfering in state decisions about standards, curriculum and assessment. His family has already moved back to Chicago. But he will stay on the job to the very end.

When Obama was elected, many educators and parents thought that Obama would bring a new vision of the federal role in education, one that freed schools from the test-and-punish mindset of George W. Bush's No Child Left Behind. But Arne Duncan and Barack Obama had a vision no different from George W. Bush and doubled down on the importance of testing, while encouraging privatization and undermining the teaching profession with a $50 million grant to Teach for America to place more novice teachers in high-needs schools. Duncan never said a bad word about charters, no matter how many scandals and frauds were revealed.

During Duncan's tenure in office:

* He used his control of billions of dollars to promote a dual school system of privately managed charter schools operating alongside public schools;

* He has done nothing to call attention to the fraud and corruption in the charter sector or to curb charters run by non-educators for profit or to insist on charter school accountability or to require charters to enroll the neediest children;

* He pushed to require states to evaluate teachers by the test scores of their students, which has caused massive demoralization among teachers, raised the stakes attached to testing, and produced no positive results;

* He used federal funds and waivers from NCLB to push the adoption of Common Core standards and to create two testing consortia, which many states have abandoned;

* The Common Core tests are so absurdly "rigorous" that most students have failed them, even in schools that send high percentages of students to four-year colleges, the failure rates have been highest among students who are English language learners, students with disabilities, and students of color;

* He has bemoaned rising resegregation of the schools but done nothing to reduce it;

* He has been silent as state after state has attacked collective bargaining and due process for teachers;

* He has done nothing in response to the explosion of voucher programs that transfer public funds to religious schools;

* Because of his policies, enrollments in teacher education programs, even in Teach for America, have plummeted, and many experienced teachers are taking early retirement;

* He has unleashed a mad frenzy of testing in classrooms across the country, treating standardized test scores as the goal of all education, rather than as a measure;

* His tenure has been marked by the rise of an aggressive privatization movement, which seeks to eliminate public education in urban districts, where residents have the least political power;

* He loosened the regulations on the federal student privacy act, permitting massive data mining of the data banks that federal funds created;

* He looked the other way as predatory for-profit colleges preyed on veterans and minorities, plunging students deep into debt;

* Duncan has regularly accused parents and teachers of "lying" to students. For reasons that are unclear, he wants everyone to believe that our public schools are terrible, our students are lazy, not too bright, and lacking ambition. If he were a basketball coach, he would have been encouraging the team to try harder and to reach for greater accomplishment, but instead he took every opportunity to run down the team and repeat how dreadful they are. He spoke of "respect" but he never showed it.

It will take years to recover from the damage that Arne Duncan's policies have inflicted on public education. He exceeded the authority of his office to promote a failed agenda, one that had no evidence behind it. The next president and the next Secretary of Education will have an enormous job to do to restore our nation's public education system from the damage done by Race to the Top. We need leadership that believes in the joy of learning and in equality of educational opportunity. We have not had either for 15 years.