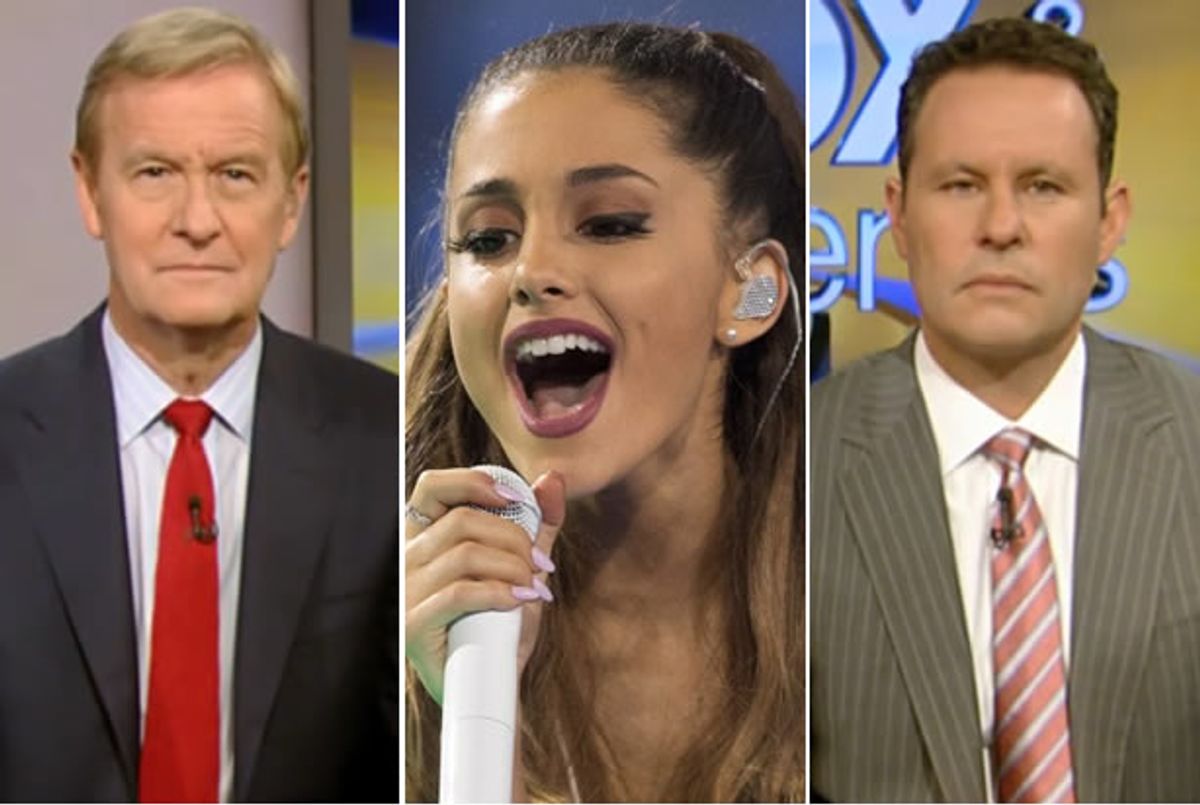 Everyone on "Fox & Friends" Thursday morning was apoplectic over video of a laughing Ariana Grande in a pastry shop saying that "I hate Americans" and "I hate America" as she peered at a rack of supersized doughnuts.

Grande has already apologized for her remarks, noting that she was joking about "how freely we as Americans eat and consume things without giving any thought to the consequences."

In the video, Grande is clearly not moments away from declaring allegiance to ISIS when a tray of supersized doughnuts is deposited in front of her. "What is that?" she asked, staring in disbelief at the monstrosity before her. "I hate Americans. I hate America."

Instead of understanding that statement for what it clearly was -- a hyperbolic expression of incredulity when confronted with the excesses of American cuisine -- the hosts and guests of "Fox & Friends" took it as proof positive that millennials are fundamentally unpatriotic, and speculated as to the reason why that may be.

The answer was, of course, President Barack Obama.

Former Miss Kansas Theresa Vail said that it's "disgusting that someone could show such disrespect for her country, especially when it's American fans who got her to where she is now."

"I don't care what she said 'in context,'" Vail added, before proceeding to insult the very Americans she was purportedly defending. "She should know as a public figure that everything you say and do is taken at face-value. Perception is reality for the public."

Co-host Brian Kilmeade asked her how someone like Grande, who grew up in Florida and was a childhood star, could hate her country so much. "How can she walk into a doughnut shop -- the doughnuts didn't come to her! -- and comment on America, and yet you grew up in America and have a totally different view?"

Vail replied by noting that "for the past six or seven years -- and that's a good chunk of a millennials' adult life -- we've had a president who doesn't believe in American exceptionalism and doesn't speak up for the American values this country was built on."

She said that you "cant' blame millennials for the modicum of patriotism when for the majority of their adult lifetime we haven't witnessed anything to [make them] think differently."

Doocy noted that Grande is now the target of a health investigation for licking some of the doughnuts sitting on the counter. "I find her disgusting," Vail said, "she has no sense of gratitude, no appreciation for her roots or the people who got her to where she is now."

Later in the program, conservative radio host Laura Ingraham called Grande "another spoiled, entitled pop princess who's benefited lucratively from being in this country, from being American." She criticized the pop star for making fun of the doughnut and, having read her mind, thinking that Americans are "all fat, stupid, don't eat organic, eat stuff like ramen noodles and mac and cheese."

"Headline for Ariana Grande," Ingraham continued, "maybe you should re-read the lyrics to 'Problem,' maybe that should be your new theme. The last time I checked, the poor people who like to buy doughnuts also bought a lot of your stupid music!"

Watch the segment below via Fox News.