Jeb Bush just stepped in it: He's either a stone-cold plutocrat -- or just a terrible pol who sounds like one

Bush says American workers need to “work longer hours.” Then he says he didn’t mean it the way it sounded -- again 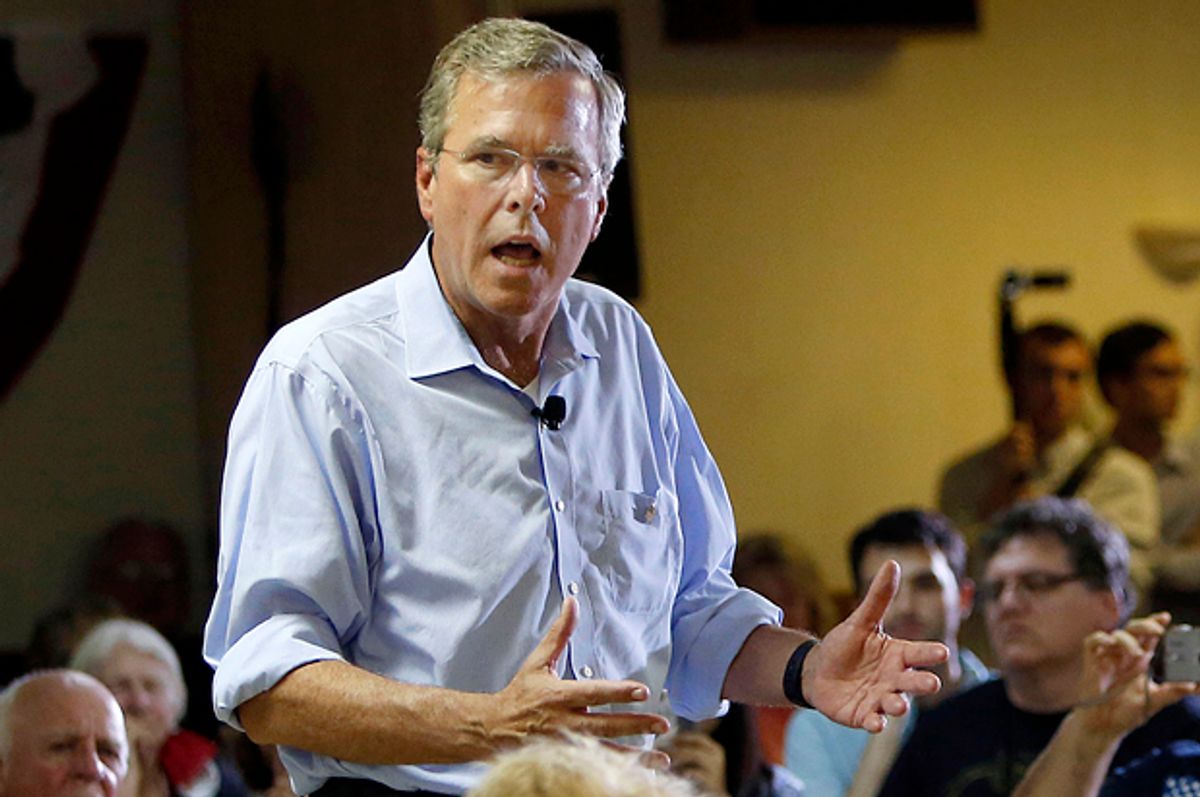 Jeb Bush apparently has a plan to grow the economy. He’s telling American workers to work longer hours, without a federal minimum wage, until they’re at least 70. Oh, and don’t expect a shot at debt-free college from Jeb – that’s just “more free stuff.”

That’s what we can glean from Bush’s recent policy pronouncements. It looks like the 2016 GOP frontrunner has studied Mitt Romney’s campaign, and concluded the problem was that Romney wasn’t enough of a plutocrat.

Unbelievably, in an economy in which workers have grown ever more productive over the last three decades, but productivity has not resulted in higher wages, Bush said Wednesday that they should work even longer hours.

“My aspiration for the country, and I believe we can achieve it, is 4 percent growth as far as the eye can see,” he told the New Hampshire Union-Leader in a conversation that was Periscoped. “Which means we have to be a lot more productive, workforce participation has to rise from its all-time modern lows. It means that people need to work longer hours” and, “through their productivity, gain more income for their families. That's the only way we're going to get out of this rut that we're in.”

The decoupling of productivity and rising income is no obscure economic fact (it can’t be, if I know it). It’s been the topic of endless discussion and debate. Throughout the post-war years, productivity and wages grew in tandem. Sometime in the late '70s, that stopped. As productivity soared in the last 25 years, wages have stagnated. That’s one reason labor rates may be declining.

But it’s also true that employers have worked hard to get along with fewer workers. Last month, the Bureau of Labor Statistics said that 6.8 million Americans were involuntarily employed part time.

Bush tried to walk back his statement after social media went crazy late Wednesday, insisting he was mainly talking about those underemployed part time workers, and those who left the labor force out of discouragement. "Anyone who discounts 6.5 million people stuck in part-time work & seeking full-time jobs hasn't listened to working Americans,” he said later.

OK, Jeb. But there was a much better way to talk about that: by putting the onus on employers who go out of their way to deny people full time work to avoid paying benefits and overtime.  But Republicans don’t go around scolding employers, for Pete’s sake!

Back in March, of course, Bush came out against the federal minimum wage talking to a South Carolina group. “We need to leave it to the private sector,” he told the audience. “I think state minimum wages are fine. The federal government shouldn’t be doing this.”

And he’s on record saying the Social Security retirement age needs to be raised to 70. “We need to look over the horizon and begin to phase in over an extended period of time going from 65 to 68 or 70,” he said on CBS’s "Face the Nation" last month. “And that by itself will help sustain the retirement system for anybody under the age of 40."

Sadly, Bush seems not to know that the retirement age has already been raised from 65 to 68 under the deal struck by Ronald Reagan in 1983. In remarks last month, he also seemed to back his brother’s failed push to at least partially privatize Social Security.

Now, to be fair, some journalists are working overtime to help Bush clean up his gaffes. On Thursday morning ABC’s “The Note” had a long explainer about what Bush really meant when he said to “work longer hours,” while last month Vox told us he didn’t really come out in favor of Social Security privatization in remarks where he praised his brother’s plan -- because he didn’t use the word “privatization.”

Side note: It’s already astonishing how hard journalists will work to clean up the messes made by the Republican frontrunner, who is supposed to be the smart, serious one in the race. But they’re invested in him. They created the image of Jeb as the smart and serious Bush, so when he looks either dumb or politically tone-deaf, they look kinda dumb too. If Bush's defenders are right, we're going to have to paraphrase Ann Richards' famous description of his father: "Poor Jeb, he can't help it: he was born with a silver foot in his mouth."

Seriously, here’s what we know: either Jeb Bush is a stone cold plutocrat who wants workers to labor for longer hours, with no federal minimum wage, and not retire until 70 -- or later, if their privatized Social Security accounts go down in another stock market crash. Or else he’s a terrible politician who says those things but doesn’t mean them. We’ll see if the Bush approach brings in the white working class voters who were cool to Mitt Romney.