Jeb Bush's plutocratic fantasy land: Why his comments about American workers are completely divorced from reality 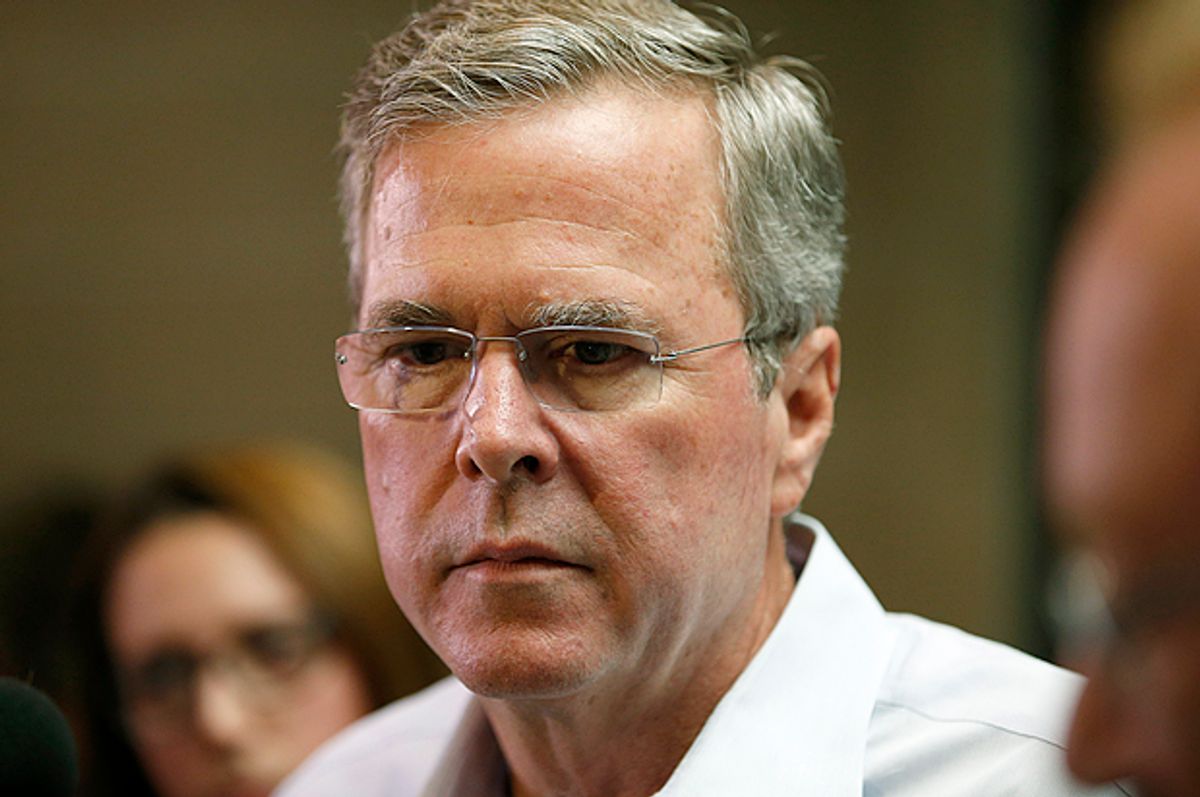 It's possible that you can forgive Jeb Bush for not knowing about regular people, when in an interview with the New Hampshire Union Leader on Wednesday, he demonstrated a complete lack of appreciation for how hard Americans work -- and for how little. Perhaps you can also forgive him for not recognizing that, in fact, Americans work more than their counterparts in other industrialized countries, that we get less vacation time, less maternity leave, and retire later than most anyone else, and that that trend is only intensifying. He’s from a family of millionaires, after all, whose parents were the millionaire children of yet other millionaires before them. It’s an unfortunate reality that the elite who enjoy that sort of privilege simply don’t have the means to understand the lives of those above whom they reside in luxury.

It’s nearly impossible to shed your elite wealth and power, so you might forgive Bush for doing right by his powerful family to maintain it. He’s a good son, grandson and brother. So perhaps you can think of him more like a prince than a former governor: Princes perform their princely duties to uphold the family’s prestige. That's just the way it goes. (Forgiveness doesn’t preclude wanting a confiscatory estate tax to halt the aristocratic trend, however.)

But what shouldn’t be forgiven is when someone like Jeb Bush, entirely ignorant of how the rest of us live, seeks to tell us what we’re doing wrong; when he blames us, indicts us and thereby makes demands. And what’s most egregious is when it’s in the service of his fellow elites, when telling us to work even harder and longer is precisely what fills the pockets of his wealthy friends and supporters. It shifts the blame from the banks and the job off-shorers onto everyone else, and then presents the solution as something that hurts us more and pads the profits of those very same culprits.

“We have to be a lot more productive,” said Bush to the Union Leader's editorial board on Wednesday, somehow unaware of how U.S. worker productivity has risen some 80 percent since the 1970s, or that we're actually the most productive workforce in the world, yet with little in the way of commensurate wage and salary increases since the time his father joined President Reagan in the White House in 1980.

“[P]eople need to work longer hours,” Bush proposed. “That's the only way we’re going to get out of this rut.”

Oh, is it, Jeb? I seem to remember a Wall Street crisis in the last year of your brother’s tenure, and millions of people losing their jobs because of it, but I don’t remember any sort of “productivity crisis” or “laziness crisis” on our end. I saw a crisis of financial capitalism in which the capitalists wrecked the ship and we lost our jobs. We didn't abandon them. We’ve been taking care of our end of the bargain, us workers. It's your lot that's dropping the ball.

Bush was forced to respond to backlash against the comments later that day, taking a moment from his vacation at the “Bush family compound” in Kennebunkport, Maine, to address a crowd there.

“You can take it out of context all you want,” he began. No, we have all the context we need, Mr. Bush. You have a multimillion-dollar vacation estate built by your great-grandfather. Your campaign donors are a who’s who of corporate elites. A career spent with some of the biggest banks in the world and your own private equity firm has people comparing you to Mitt Romney. And now you’re telling us that we’re the problem. Please proceed, Governor.

That wasn’t the context Bush was referring to, of course. He and his ilk aren’t the problem, goes his logic, but rather that “high-sustained growth means that people work 40 hours rather than 30 hours.” You don’t know why Americans are kept working 30 hours per week? How can you not know that? They don’t choose to work less, it’s that their employers (you know, your buddies) have weekly thresholds that determine full-time work, and full-time work means that the company must provide benefits in addition to wages. The Affordable Care Act mandates that large employers are liable for employee healthcare for workers putting in more than 30 hours per week on average. That’s why Americans are kept under 30 hours.

To his credit, Bush did sort of allude to some manner of employer responsibility, but stops short of being explicit at all, only offering a passive admission that “giving people a chance to work longer hours has got to be part of the answer.” The blame he assigns to workers is moral, though: We choose “being dependent on government,” he says, “rather than getting in line.” It’s a moral failing that he’s comfortable assigning to us in what was supposed to be an attempt to mend the mistake he’d made earlier. It’s still our fault, according to Bush. A dynastic front-runner of the GOP, swimming in millions and millions in corporate and Wall Street elite donations and literally swimming at his vacation estate, tells us that we’re the problem, that we’re living too easy. He does know that we’re the ones who hire him, right?