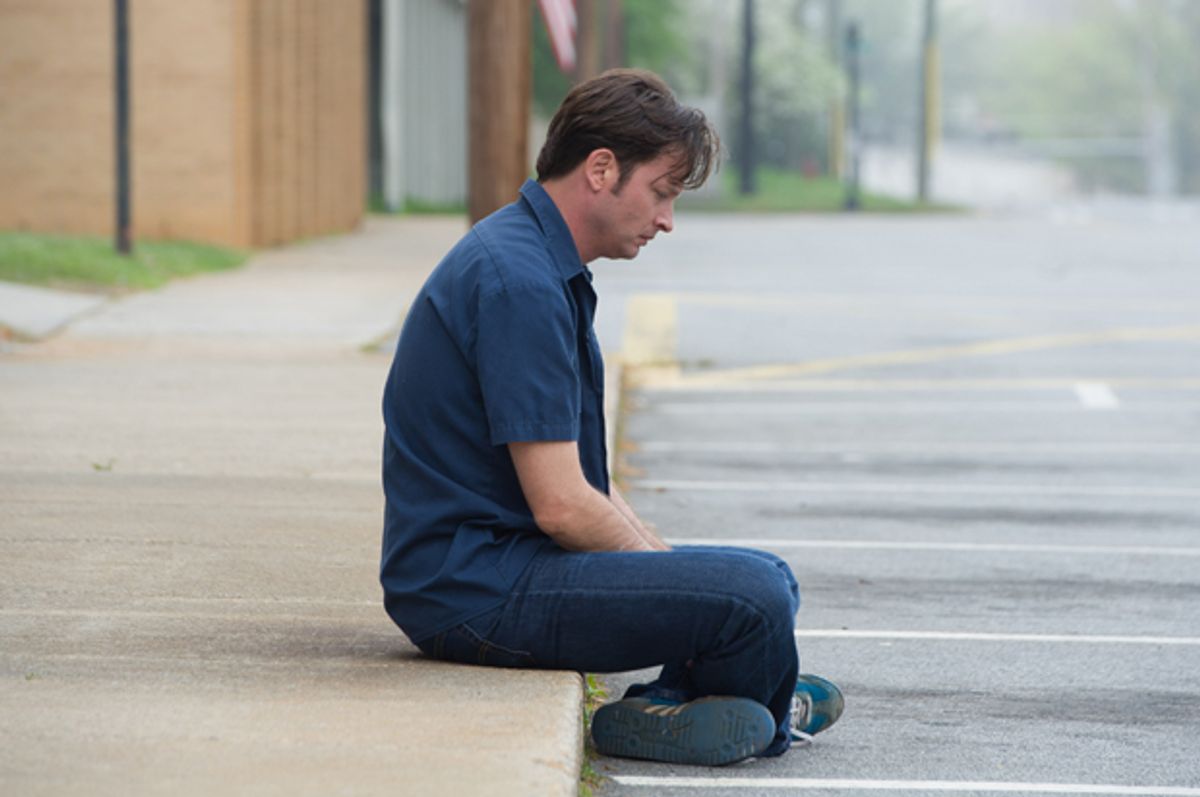 Perhaps the best indicator of “Rectify”’s own attitude towards its weighty subject matter is the fact that just this week, the show released a podcast tie-in to the show, one that apes WBEZ Chicago’s “Serial.” In it, a skeptical journalist named Jane Ellis (voiced by Becca Kauffman, of the band Ava Luna) offers a cheeky homage to Sarah Koenig’s distinctive style—and a hard-nosed, unsympathetic take on the rape and murder that “Rectify” has been remembering and deconstructing for the last two seasons. Ellis’ delineation of the case against Daniel Holden, “Rectify”’s protagonist, could not be more different than the elegiac grace of the show itself. “Rectify,” the show and its characters, typically speak in poetic circles. Holden himself—played by the fantastic Aden Young—has been confined for so long in solitary that regular conversation is still new to him. The show’s palette is defined by shades of white—so many that it’s hard to search out the purest one, leading the viewer to question their whiteness at all, which might be a metaphor for innocence, or death, or heaven. In the podcast, Kauffman’s Ellis cuts through all of that romance with her slightly cynical, Koenig-esque questioning. “He really says that!” she observes at some point, after the podcast plays a clip of dialogue from “Rectify”’s pilot, when Daniel is speaking to the press about having been released. And about the plot of the second season, she has the following to say:

And this is where it gets, I don’t know how else to say it… a little crazy. Because instead of retrying Daniel, the local DA has offered Daniel a deal. Plead guilty to killing Hanna Dean… in exchange for time served.

The “Rectify” podcast (called, appropriately, “The Case Against”) is written by “Rectify” writer Kate Powers, one of the minds behind that plea deal and Daniel’s circuitous rambling. And through Powers, Ellis concludes, “I think this is a terrible idea.”

Needless to say, SundanceTV's flagship program “Rectify” is a pretty self-aware show. The story follows the aforementioned Daniel Holden, a man who is trying to navigate his unexpected new lease on life, 19 years after he was sentenced to death for the rape and murder of a teenage girl. Prison, for Daniel, was solitary confinement—the only company he had was the voices of his fellow condemned and minutes on the phone with his steadfastly loyal sister, Amantha (Abigail Spencer). It’s not a life that prepares one for re-entry. Now in his late thirties, Daniel is finally released, and has spent the last two seasons searching for redemption, meaning, and some guidance on how to move forward through the rest of his suddenly free life.

As “The Case Against” makes abundantly clear, this is fact-based, political subject matter—a search for evidence that contains commentary on the criminal justice system, trials in small towns, and the arbitrariness of death row. But in the hands of showrunner Ray McKinnon and his creative team, “Rectify” takes that same subject matter and makes it a quiet, thoughtful, emotionally rich drama. Some shows are gritty; “Rectify” is the opposite of that—silky, perhaps. It has the refreshing quality of a tall drink of water. Because the show is deceptively simple—it aims for the conveyance of the basic pain and beauty of existence, told through the experience of a man for whom it is all thrown into sharp relief. “Rectify” has not told its viewers, two seasons in, if its protagonist really did rape and murder 16-year-old Hanna Dean—it hasn’t needed to. Daniel’s struggle with good and evil is in his every waking moment; his memories of Hanna, prison, and his hometown of Paulie are enough to provide the whole story. For a show whose premise is based on the enforcement of law and order, there is precious little judgment in “Rectify”—the title itself is a nod to how punishment or prison does not really fix what has been broken in a crime.

Where “Rectify” has struggled is in creating story past its first season, which was just six episodes long. The second and third span 10 episodes, and “Rectify” was just renewed for a fourth; that’s a lot of story to create. The characters all still feel recognizable and lived-in, but it is true that especially in its second season and going into the third, “Rectify” is slow. The show’s storyline has taken up not more than six weeks, from when Daniel was released to the end of the second season, when he goes in to negotiate the plea deal with the D.A. The first season of “Rectify” gave each day an episode, more or less. The second season is less bounded, and the first half of it meanders, content to enjoy the scenery of Georgia piedmont. But perhaps because that first season is so tightly written, even the episodes that meander feel extraordinarily comfortable—I’ve grown to trust the writers and the characters, and I enjoy spending time in their world. Plus, the fact that time is malleable and burdensome is part of “Rectify”’s premise and purpose. The most difficult parts of life often boil down to the difficulty of just getting through the day.

The third season puts a time limit, of sorts, on what can happen next for Daniel Holden—a combination of the outcome of the plea deal and Daniel’s own choice on how to live his life. The end of season two put Daniel—and the audience—in the incredibly uncomfortable position of asking him to confess to the crime that sent him to jail the first time around, so as to avoid any further indictment. The third season commits to examining what even the superficial admittance of guilt does to Daniel’s family and Daniel himself. As it does it runs up, again, against what the struggle at the core of “Rectify”—the tribal narrow-mindedness of small-town Southern life, in contrast with its equally present loving-kindness, its warm and open forgiveness. If Southern Gothic reckons with the horror of how the South was able to build itself on the backs of slaves, “Rectify” is a necessarily long and fumbling attempt to come to some kind of peace with that understanding. The final scene of the second episode of the third season is a return to the reckoning that I remember best from the first season; it indicated to me that as this story inexorably moves forward, it has much more to say.

The third season’s title sequence is a tiny second or two longer than the first two seasons—enough that when I watched the first two episodes sent to critics, I briefly worried that the show had changed its theme music. It hasn’t, thankfully. “Rectify” is encapsulated beautifully in its title music—a minute-long excerpt of Balmorhea’s “Bowspirit.” The instrumental track is made up of a percussive acoustic guitar strumming chords, the searching and repetitive arc of a violin, and the airy melody of a plucked banjo. It takes a moment or two for the music to really start up—as if the musicians are caught by surprise, still warming up, when the track starts recording. It’s a melancholy tune, especially on the part of the violin, which offers the same haunting motif over and over, but it is so beautiful it’s possible to forget to be sad. It is also a reminder of one of the show’s awful truths. To quote protagonist Daniel, who is every day trying to better understand this world that has dealt him so much pain and cruelty: “It’s the beauty, not the ugly, that hurts the most.”