Don't believe the "Orange is the New Black" hype: How the Netflix series misrepresents life behind bars 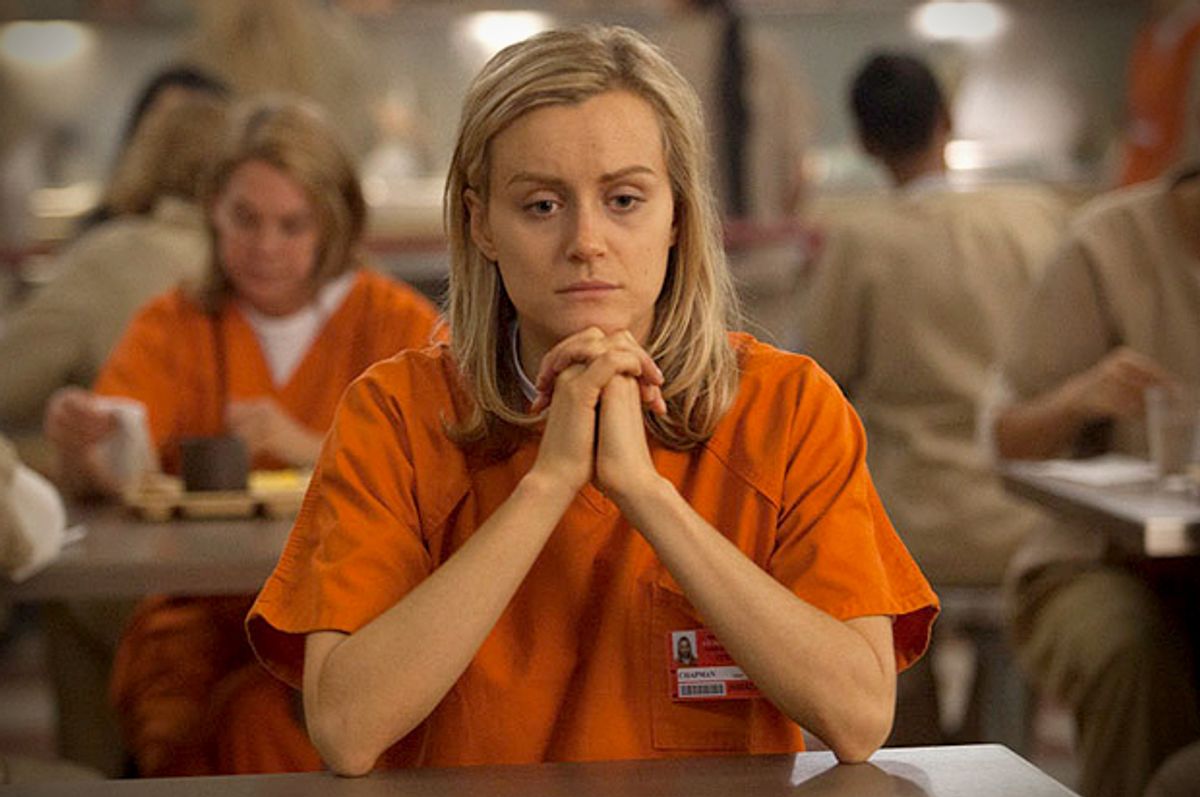 Since its debut in 2013, the Netflix series "Orange is the New Black" has been hailed as a humanizing portrait of female inmates. As a former inmate myself, I call bullshit on that. It’s not humanizing, it’s not realistic, and it’s not a step forward.

See, I know a thing or two about what real prison is like. In 2010, I was arrested on drug charges, and I went on to serve 21 months behind bars, first in county jail and then in state prison. I’d grown up in an upper-middle class family and, as of the day I got arrested, I knew nothing about the prison system. I didn’t even understand the semantic distinction between jail (typically a county-run facility used for shorter sentences) and prison (typically a state or federal facility used for longer sentences). One thing I did understand was that I should be scared. I knew from the start that I’d eventually be going to state prison, and that sounded terrifying.

The thing is, prison is scary in some ways – for example, the omnipresent threat of solitary confinement is terrifying – but it wasn’t scary in any of the ways I expected. I wasn’t in constant fear of being raped or beaten up. In fact, I met some wonderful people. That was not what I’d been led to believe I should expect in prison. Without any better frame of reference, I’d bought into popular beliefs about what prisoners are like. Incidentally, they are not “as seen on TV.”

In "Orange is the New Black," the problem begins with Piper. She’s not exactly the main character in the series, but it’s fair to say that she’s the anchor character, the one to which the rest of the story is tied. Over the course of the first three seasons, we come to learn that she’s a pretty horrible person. At the start of the series, she’s timid and polite and seems like a nice lady. Soon enough, she starts cheating on her fiancé. And season one ends with her beating the crap out of another inmate (admittedly a very annoying one.) In season two she rats out girlfriend Alex in order to get her sent back to prison, and by the end of season three she sets up her new love interest Stella, getting her sent to solitary just days before her scheduled release date – all in the interest of protecting a panty-smuggling ring.

What causes Piper’s transformation? In season one, during her off-the-cuff "Scared Straight" speech, she tells aspiring badass Dina that the scary part of prison is “coming face-to-face with who you are.” It seems that Piper’s character transformation throughout the series is not because prison changed her, but because it helped her find who she always was – which is not a good person. The hidden message here is that if you think you know an inmate who’s a decent person, then you just don’t know them well enough. They’ve probably always been bad all along. That’s basically the opposite of humanizing.

Of course, most of the "OITNB" characters just aren’t decent people in the first place. There are some exceptions – SoSo, Yoga Jones, Taystee – but for the most part, the show is populated with some pretty hate-able characters and caricatures, from Vee to Boo to Mendoza to Red. That’s not realistic and it makes a mockery of the idea that the show humanizes its inmates. Yes, there are some really horrible, nasty people in prison, but there are also some absolutely wonderful women there. I met plenty who I’ve stayed in touch with since my release and am proud to call my friends. (I just wish we could’ve met somewhere other than prison.)

To be sure, some of my prison friends have gone back to drug use and ended up back behind bars. But some are out changing the world with prison reform efforts, going to college, working and paying taxes, or raising families. Even those who did end up back behind bars aren’t necessarily bad people. This is a crucially important point, but one that many Americans categorically reject, and that rejection has real-world consequences. And "OITNB" isn't helping.

The problems go deeper than that. Overwhelmingly, the show – and especially season three – depicts the women of Litchfield as horrible mothers. Admittedly, just as it's true that there are some terrible people in prison, there are some terrible mothers in prison. There are women who have committed unspeakable crimes in which their own children were the victims. That happens, and I’m not saying it doesn’t. However, it’s not realistic to paint all prison moms with the same brush, because they’re not all horrible mothers. Some women are doing time for killing their abusers, in some cases to protect their children. Some women just made mistakes, and some women are actually innocent. Some women were bad mothers while they were using drugs, but once they sober up they no longer resembled the incompetent, mean, and uncaring parents shown in "OITNB."

To choose one particularly galling example, a Mother’s Day event in season 3 is basically a carnival of bad parenting. We see everything from a mother losing track of a kid to a mother abandoning her baby to get high on drugs smuggled in through the baby's diaper. They aren’t able to handle basic parenting skills like dealing with a dirty diaper. They tell their children how unwanted they are. These things might, indeed, all happen, but there is a dearth of counterexamples than makes the show’s depiction of prison mothers one-sided, and perniciously so. Although there are probably some competent mothers at Litchfield, what the show chooses to focus on is primarily the terrible ones.

Again, this is not humanizing inmates, but making them out to be worse than they are.

Aside from problematic depictions of inmates, the show has also become wildly unrealistic in other troubling ways. In season one, there seemed to be some resemblance to real prison life but, subsequently and bit by bit, it has become increasingly absurd, with guards getting engaged to inmates in the middle of the yard and Piper developing a panty smuggling ring to sell used undies to pervs.

One of the most ridiculously implausible -- and obviously objectifying -- occurrences comes in episode 2 of the third season, when the prisoners are made to walk around in bras and panties all episode. The prison suffers a bedbug outbreak and all the women’s clothes are confiscated to be cleaned. However, there’s not enough replacement paper garments for everyone, so half of them strut about in underwear.

Needless to say: This would not happen. Real prison guards would not say, “Oh, okay, trot around half-naked, that’s fine!” If they really and truly somehow couldn’t get clothes from another prison, they’d say, “Suck it up and wear these bedbug-infested clothes. Now.” Bedbugs are likely to be less of a liability than half-naked inmates.

To me, this particular departure from reality is particularly problematic because it’s sexually objectifying a demographic that’s already considered less than human. At one point Red says, “No one in here is people.” And she’s completely right. In prison you’re just a number, not a person.

Another problem with the show is the focus it puts sex, which, in and of itself, is not necessarily unrealistic. In my experience, there is a decent amount of sex in female prisons – both with guards and with other inmates. However, season three’s girlfight-turned-hot-lesbian-sex scene is not a fair representation of prison intercourse. If you’re going to have sex in prison, it’s going to be under a bed on some dirty floor or, more likely, in a disgusting bathroom stall. It’s probably not going to be hot and sexy. In fact, it’s probably going to be completely terrifying. If you’re having sex, you’re taking a huge risk. If you get caught – and the guards are lot more omnipresent in real life than they are on TV – you’re going to SHU, probably for a long time.

In the real world, prison is not so constantly dramatic. Real prison is actually great stretches of boredom. It’s days of cleaning showers, mopping floors, and attending poorly run drug treatment programs. It’s not fun, and it’s not full of intrigue. It’s not that bizarre and almost unbelievable things do not happen in prison -- it’s just that prison life is not a neverending parade of nutty and humorous happenings.

During the 21 months I served behind bars, I saw plenty of bizarre. There were fights involving fecal matter, there were guards having sex with inmates, and there were strange strategies for smuggling everything from heroin to cinnamon. At one point, I met a woman who punched someone for invading her dreams. But that’s not the average, not the everyday. Everyday prison life is boredom and depression punctuated by occasional bursts of insanity.

And while the quirky and bizarre is overrepresented in "Orange is the New Black," actual mental illness is somewhat underrepresented. In real life, there are far more Crazy Eyes and Lornas. In real life, there are women who actually think they are talking to the devil, and not just conversing with a guy named Diablo on a smuggled-in cell phone. According to study by the Department of Justice’s Bureau of Justice Statistics, 64 percent of jail inmates, 56 percent of state prisoners, and 45 percent of federal prisoners have symptoms of serious mental illness.

Why is this important? Because it’s important to understand who we’re locking up and why, which is something the show does not portray accurately. Prison is filled with an awful lot of people who might not be there if they’d gotten necessary mental health treatment in the first place and, if the show really wanted to humanize inmates, it would show that.

To be clear, these criticisms do not necessarily apply to the Piper Kerman memoir on which this show is based. I have no bones to pick with that. Further, I completely understand that some of the problems I’ve cited with this show are simply what happens when you take reality to the small screen. But that doesn’t mean that we need to pretend that it’s something positive. "Orange is the New Black" has done some really good things; it’s drawn more attention to prisons and made people more willing to talk about them. And that’s huge. But that doesn’t mean it’s doing anything good in terms of humanizing inmates. So let’s just stop telling ourselves that lie.