Rebel alliance: How Bernie Sanders' unlikely rise, the Greek mini-rebellion and crazy Donald Trump (!?) have fueled the climate of resistance

Bernie and the Donald have electrified a tedious campaign, and Greece has rocked Europe to its core. What next? 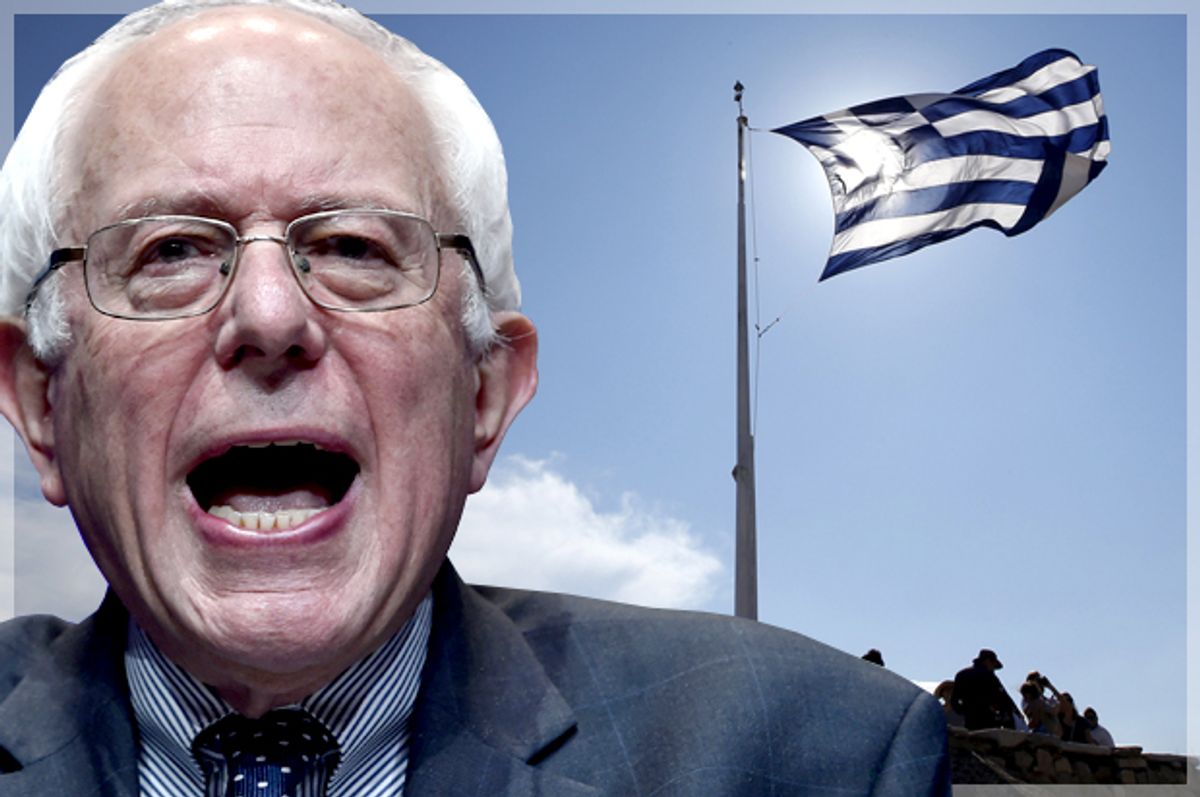 Is it an accident that the two presidential candidates who have surged in the polls and dominated media coverage over the past couple of weeks have been Bernie Sanders and Donald Trump? Not at all. Those two are currently playing the role, in the domestic political arena, that the nation of Greece has been playing in global economics. No doubt it’s easier to grasp the parallel between Sanders, the first avowed socialist to be a major presidential candidate for 80 years, and the leftist Greek government that bravely, if briefly, tried to defy the Euro-American neoliberal orthodoxy of endless debt slavery and so-called fiscal austerity. But I’m willing to argue that Trump plays an intriguing role in this symbolic drama as well, and it’s a mistake to focus only on his noxious and/or unhinged utterances while ignoring his big-picture significance.

Both Sanders’ insurgent Democratic campaign against Hillary Clinton and the Syriza government in Athens, elected on a promise to resist the European Union’s imposed austerity regime, represent an obvious challenge to the established order of political and economic reality. The challenge is quite likely symbolic or minor, in both cases: Even if he does well in Iowa and New Hampshire, Sanders has no serious shot at winning primaries in bigger and more conservative states, let alone winning the nomination. Greece has been a bankrupt and dysfunctional nation for years, and its economy is barely noticeable within the EU as a whole. But even a single match looks like a threat when your house is made of paper, which is precisely the situation of those who defend the bipartisan political order of the United States and the neoliberal economic order of Western Europe.

Bernie and the Greeks have provoked a combination of panic, mockery and horrified fascination that seems massively out of proportion to their actual importance. They’re like a modern-day cognate to Grenada, the tiny island nation whose revolutionary government was overthrown in a 1983 U.S. invasion that was an especially blatant and pointless violation of international law, even by our standards. Of course Grenada, with its total military force of roughly 1,500, posed no threat to American lives or property. The Reagan administration’s various justifications – the Grenadians might be building a Soviet-Cuban airbase, or American medical students might be held hostage as diplomats had in Iran – were WMD-grade preposterous. But we just couldn’t have little Western Hemisphere nations thinking they had the right to govern themselves, in defiance of American wishes. Who knew where that might lead?

Similarly, many supporters of Hillary Clinton seem to fear that she will be mortally wounded in the general election (the one that will happen 17 months from now) if she is forced to face actual opposition from the left, or perhaps that the Bernie boomlet of summer 2015 will taint the entire Democratic Party pink for years to come. European bankers and bureaucrats fear (with somewhat more reason, it must be said) that a Greek debt default and exit from the Eurozone might provoke mass unrest across the continent, and expose the fundamental contradictions of the entire EU project. But the Sanders surge and the Greek “No” vote last week – and Donald Trump too, after his own bizarre fashion – have provoked something else too: Hope, and excitement, and a sense of possibility. Those things are extremely dangerous, and must be stamped out.

We have simultaneously been told that the Sanders campaign and the Greek “No” present an existential threat to civilization and that they are not real and shouldn’t be taken seriously. To use the immortal phrase of IMF head Christine Lagarde, Bernie and the Greeks are not behaving like “adults,” those sober and levelheaded people who have abandoned any pretense of changing the world for the better. Needless to say, it is childish to question the moral legitimacy or long-term viability of the vast global shell game of finance capital, or to point out that its principal mechanism for resolving crises is to extract ever more wealth from workers and homeowners and retirees and siphon it upward to the bankers.

Children who misbehave must be banished from the grownup table and sternly or lovingly corrected, to make sure the other kids don’t start acting up. That’s what apparently just happened to Greek prime minister Alexis Tsipras, who has been arm-twisted into accepting an onerous bailout deal that will solve nothing and is barely different from the one he previously rejected. Sooner or later Bernie Sanders will have his woodshed moment too, although it may be framed in more collegial terms. Somewhere around March of next year, he will graciously withdraw from the race and endorse Clinton, after a private meeting in which he extracts meaningless platitudes from her about economic democracy and world peace. (After which she will never speak to him again.)

But for once I don’t want to come off as a total Cassandra, because the bankers and bureaucrats and political apparatchiks on both sides of the Atlantic are right to be afraid. Childish misbehavior is likely to spread, and the adults won’t be able to contain all of it. The surprising Sanders surge and the Greek middle finger to austerity are just the tip of an enormous global iceberg of popular discontent, and the sense of hope and possibility they embody will not be so easily quelled. A quarter-century after the end of the Cold War, the dominant model of political and economic reality known as the “Washington consensus” is fraying badly, and drawing near its existential crisis.

We have been told for decades that democracy and prosperity would spread around the world along with corporate profits, free trade policies and the unfettered movement of capital. This wasn’t ideological hokum, we were assured -- despite its strong resemblance to the prophecies of Karl Marx turned upside down. It was just a neutral scientific fact about how the world worked, understood by all adults and denied only by children. Even from the beginning it was noteworthy that all this freedom and prosperity and democracy often seemed to require the suppression or subversion of certain kinds of democracy that didn’t fit the template, enforced by a gargantuan superpower whose military might and intelligence capabilities were without precedent in world history. But we don’t need to go all Howard Zinn to notice the central point, which is that everybody can see that it just hasn’t worked. Profits have been great, but prosperity has been trending downward for 40 years and the state of our democracy is a sick joke.

That brings me back to Donald Trump, the sick joke of this particular electoral cycle, who has unmistakably struck a nerve. He’s the Bernie Sanders of angry white men, the latest eruption in the long tradition of proto-fascist and/or proto-libertarian American populism, previously encountered in Ron Paul, Ross Perot and George Wallace. It may sound laughable to compare Sanders and Trump, who are nearly as far apart in terms of political ideology and worldview as they are as fashion icons. On one hand we have the rumpled Jewish senior citizen from Vermont by way of Brooklyn, the only prominent American elected official who is willing to call himself a socialist before Sean Hannity does. On the other, we basically have the guy with the top hat from the Community Chest cards in Monopoly, the untrammeled Id of capitalism with a ghastly comb-over and flaming dollar signs instead of pupils.

But beneath all the easy gags about Bernie and the Donald is a layer of uncomfortable kinship. If Sanders makes Hillary Clinton look like a plastic-coated, Wall Street-sponsored prevaricator and triangulator, and exposes how far the Democratic Party has wandered from its FDR or LBJ principles, well, the shoe fits. Trump poses an even bigger problem for the Republican brand by expressing out loud all the xenophobia and bigotry that the 47 or so other GOP candidates would rather deliver by semaphore or hand signals or eyelid Morse code. With the party’s white exurban base roaring in delight, Jeb Bush and Marco Rubio and the rest of the dudebro maroons are out there twisting in the political wind, unable to agree with Trump, unwilling to condemn him and vainly trying to ignore him. And while Trump may be a vain, cruel racist blowhard with an apparent personality disorder, he’s also the only major GOP contender who isn’t effectively a con man owned and operated by corporate America, selling one agenda in public and another behind closed doors.

Furthermore, Trump and Sanders actually agree on one issue: They believe that the toxic tide of money has hopelessly corrupted politics, a topic other candidates are strangely reluctant to discuss. Neither of them looks or acts like a conventional or “electable” candidate, and indeed neither of them will be elected president, not next year or any other year. Those things are central to their appeal, and their unlikely mutual rise. They say what they think, they argue for positions well outside the normal boundaries of debate, they have no fealty to corporate donors and they have nothing to lose. In the house of mirrors that is American political discourse, it always aids comprehension if you view things backwards. Mainstream media commentators, thoroughly steeped in the values and mores of the political establishment, can’t help depicting Sanders and Trump as sideshow attractions. But the real clowns in the political circus are to be found elsewhere.

In their own vivid and special ways, the deranged Manhattan plutocrat and the hirsute Green Mountain socialist are consummate anti-politicians who represent the widespread rejection of electoral politics, that process of manicured meaninglessness and collective disempowerment by which we select the next figurehead to be entrusted with bailing out the financial sector’s biggest criminals and bombing other countries without telling us about it. If one side of the crisis of neoliberalism is exemplified by the cruel and deliberate impoverishment of noncompliant small nations like Greece, another can be seen in the decay of our own electoral democracy. In the age of Citizens United, the Koch brothers and K Street, it has become the performance of democracy rather than the real thing, a zombie democracy reanimated with Super PAC dollars and largely ignored by the general public.

Less than one-third of eligible voters even bothered to show up for the 2014 midterm elections, an all-time low turnout that, as I have previously argued, was both regrettable and understandable. Public apathy and distrust of politicians is now a truism built into politics; every candidate tries to define himself or herself as an outsider, a maverick or a rebel, no matter how ludicrous the label may be. Yet here we are, facing the dreary probability of another long campaign that ends with another Clinton facing another Bush.

Compared to those recycled oligarchs and the general atmosphere of mingled exhaustion and desperation around both political parties, Bernie Sanders and Donald Trump really do look like dangerous rebels seeking to overturn the system. If you’re reading this, I can guess which one of them you hope will renew the promise of American democracy, and which one you think belongs inside a galvanized crate in “Jurassic World.” But honestly, that part doesn’t much matter. Both of those unlikely candidates will be swept to the sidelines soon enough, as the political caste scrambles to reassert order, at least until the next crisis comes along. But the Bernie and Donald show has already injected an unexpected jolt of electricity into our moribund system, drawn from the same current of awakening resistance that fueled the Greek rebellion, a current whose rising thrum can be felt just under the surface everywhere in the Western world.