Age of the megafire: We're making wildfires worse -- and we don't know how to fight them 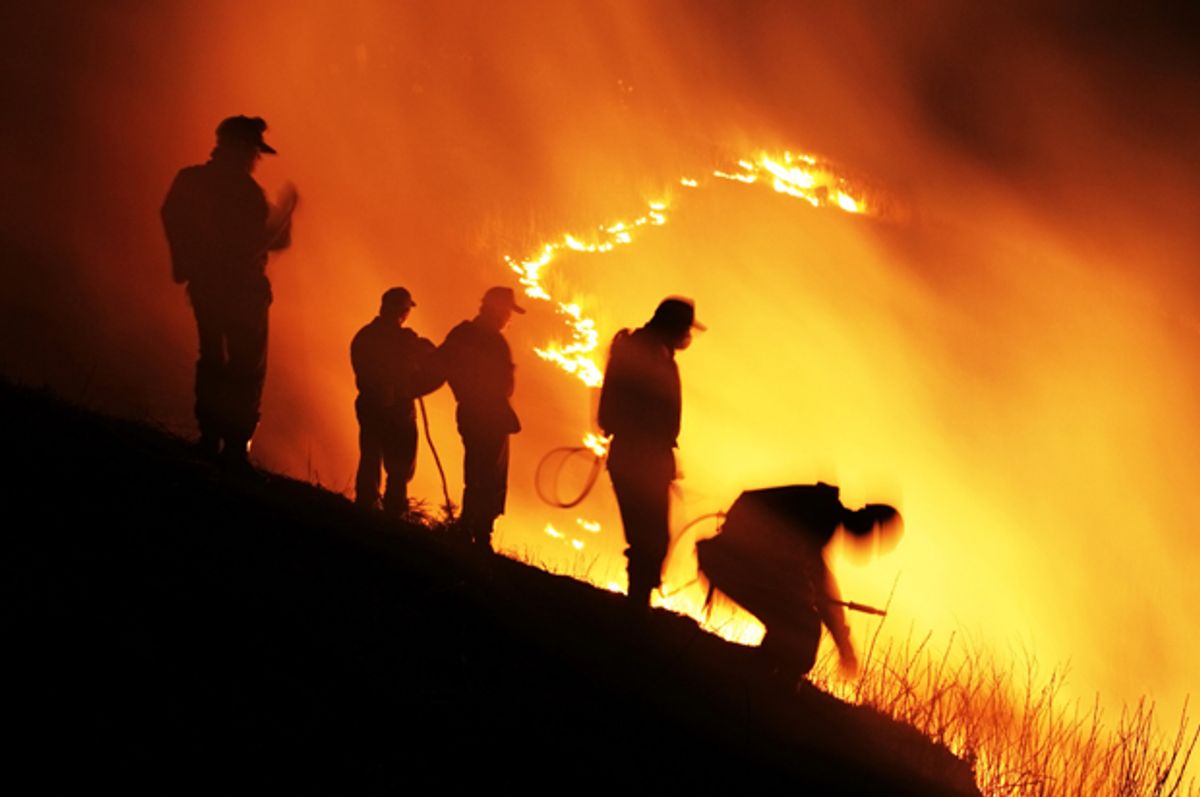 Wildfires, journalist and former hotshot firefighter Kyle Dickman reminds Salon, aren't natural disasters until they run into humans. But often enough, they do, and the consequences -- for the people in harm's way, and for those who put their lives on the line to protect them -- can be catastrophic. That was certainly the case in 2013, when a wildfire near Yarnell, Arizona, killed 19 men, all members of the hotshot crew sent to fight it.

The circumstances that led the firefighters to head into the blaze that day, and the unanswered questions about what, exactly, went wrong, make up the narrative of Dickman's recent book, "On the Burning Edge." One thing we do know, however, is that the Yarnell Hill fire was no anomaly. So-called megafires are occurring more frequently, a pattern expected to continue in the future. And we know that human activity -- the unwise decision to suppress too many fires before they could thin out the fuel for future conflagrations, the hotter, drier climate that's resulting from our emissions of greenhouse gases -- is largely to blame. The question we're grappling with now is how to deal with this growing threat in a way that prioritizes our safety without creating the conditions for worse problems down the line.

With the Western U.S., Canada and even Alaska ablaze, Salon spoke with Dickman about our current, flawed approached to fighting wildfires and about what it's going to take to start doing things differently. Our conversation has been lightly edited for clarity.

A question I often come across as a journalist, with all of these wildfires in the news right now, is how do you know the difference between a "good" wildfire and a "bad" one?

Wildfires aren’t natural disasters until they burn something we value. If a fire is burning near a watershed, or it’s threatening to burn houses or towns, then I think it becomes a “bad” wildfire. And it’s at that point that we start sending as many resources -- hotshot crews, air tankers, fire engines -- as are available to try to put that fire out. That's when they get expensive, too.

That seems like a very subjective measure, especially when we have more people building in areas where fires occur. From a long-term perspective, where you want to let some fires burn to prevent future ones ... is there a way to make that call? Or is it that once there's something valuable in its path, that decision is no longer possible?

The way that we deal with it currently is that when there are structures threatened -- whatever that means, and that is a subjective call, that’s a call made by commanders who look at the fire and say, what’s the likelihood, based on weather and fuel conditions, that the fire is going to run up and burn that house down? -- then they decide to suppress it. So basically, it is subjective. There is no way we can say this is cleanly a “bad” fire and cleanly a “good” fire. A lot of times, even a “bad” fire -- something burning close to houses -- is also doing good work for the forest, burning out some of the heavy underbrush or thinning some of the overgrown trees.

You’ve argued that American wildfire policy, as it is carried out right now, is misguided. Can you explain more about what you mean by that?

Like I said earlier, wildfires don’t become natural disasters until they burn something we value. But we treat most wildfires like they’re natural disasters, even when they’re not burning things that we value. The concern is that, basically, there are between 15,000 and 90,000 fires that burn every summer, and we put out the vast, vast majority of those fires before they grow larger than a city block. Because of that, we’re basically doubling down on a failed policy because the more fires that we suppress, the more the forests have to grow thick, and the more likely it will be that future fires will be more explosive, because there’s more fuel to burn. I think a better policy -- and there is some movement in this direction -- would be something that puts millions toward preparing our forests for wildfires, by thinning out overly dense forests and letting more wildfires burn, rather than simply suppressing all the fires that spark.

The federal, state and local government together spends $4.7 billion a year on wildfires -- is any of that money going toward prevention right now?

Most of it’s going toward suppression. I don’t know the exact figures, but I think it’s about $300 million that goes to preparedness, which isn’t much relative to the $4.7 billion. It used to be that fire suppression consumed about 16 percent of the Forest Service's budget -- that was in 1995 -- and today it consumes fully 50 percent of the budget. The agency feels a lot of pressure, even right now -- for instance, today [Thursday], Tom Harbour, who is the director of Forest Service’s fire program, is meeting with senators to discuss how they can fix the funding crisis. Because basically, when they overspend that money -- they get an allotment, a certain percentage that goes toward fire suppression, but every year for the past 15 years they’ve overspent it -- they start reaching into the pockets of other programs, like fisheries, or biology or whatever else. Even prevention, and that’s where the money should be going, if we want smaller fires. So the result is, all the Forest Service is really doing is spending billions of dollars fighting fires, and not spending much money at all preparing for them.

And is that preparation something that needs to come completely from the federal level, or are there local initiatives that can be taken also?

Yeah that's a great question -- it can’t come only from the federal level. And if you look at Western land management, it’s a mosaic of ownership: it’s federal, state, county and municipal. All of these governments deal with wildfire, and so it can’t be just the federal government that prepares for them. But most of the funding ultimately is going to come from federal or state government, because they are the only ones with the money that can afford to pay for suppression or prevention.

I'm also curious about how we talk about climate change as it's going to play into this. I imagine it's going to add to the need for preparation -- is that something we’re taking into account right now?

I think that there are a lot of people, I'll use the Forest Service as an example, who understand that fires are getting more intense now, and burning more intensely now than at any point in history -- even if that isn't framed in terms of climate change. They understand that with 140 million people living in fire-prone areas, they have to figure out how to deal with wildfires; they have to change their approach to them. Because otherwise, we’re going to see more events like Yarnell Hill, where there were 19 firefighters killed, 130 houses burned. With so many people living in the West, with $237 billion worth of property threatened by fires, unless we adjust our approach to these megafires, I think we’re going to see more disasters.

So Yarnell Hill you see less as a tragic anomaly than as a harbinger of future disasters?

No, it isn’t. But I think there are solutions to how we can prepare for it. Right now, most Westerners expect firefighters to put out fires when they see them, that that’s what firefighters should do. But the truth is firefighters can’t really control the highest intensity of blazes. But what homeowners and towns can do is prepare their structures for fires before the fires start. What that means is using chainsaws and chippers to actually thin the brush out from around the houses, and then using metal roofs or fire-resistant siding, stuff that won’t catch fire. These types of things actually will save towns, much better than the firefighters can.

We are seeing some of this in the West, like the city of Prescott, Arizona, which is where the Granite Mountain Hotshots, the guys who died in the Yarnell Hill fire, were from. Originally the Granite Mountain Hotshots were created as a fuels crew. Their job was to go out and do exactly what we’re talking about: thinning the brush and the overly dense forests around the city of Prescott, so that when fires did start, they would bump into that fenceable space, so the town wouldn’t burn, and the firefighters could put out the blaze. There is more of that happening in the West -- Santa Fe has a program like that, Boulder has a program like that, the town of TK in Nevada --  so there are encouraging signs that there is more of that to come.

What specifically can happen at the federal level to help?

Right now, there are two bills before Congress -- one's the president's, and the other is from Republicans. Both are trying to do more or less the same thing, which is allocate less money toward suppression, and more money toward preparedness. I don’t think either bill is going to give the Forest Service enough money to actually create landscape-wide forest restoration, but again, it’s a small step in the right direction.

Do they seem to have a good chance of getting passed?

I don’t know. It seems like something will go through -- you were saying earlier how wildfires have been in the news -- it’s been a bad season for it and it’s going to get worse before it gets better -- and when that happens, I think lawmakers feel some pressure to actually get something done. So I think there is a pretty good chance we’ll seem some movement at a federal level on how fires are funded. But as I said, I think it'll be a small step and it won't be a solution. There's not a magic bullet, is the problem. You have to understand, we’ve been fighting fires for 100 years. It’s going to take at least 100 years, and probably more than that, to get our forest back on track or readapted to fire. It’s a long-term project. And as we were talking about later, it’s not just about change at a federal level. It's about change at a federal, state, county, municipal, and then down to the individual homeowner. It'll just take engagement from a lot of different parties.