How "The Cosby Show" duped America: The sitcom that enabled our ugliest Reagan-era fantasies

In Cosby, Americans mourn the loss of an innocent part of their youths. But there's a problem with that nostalgia 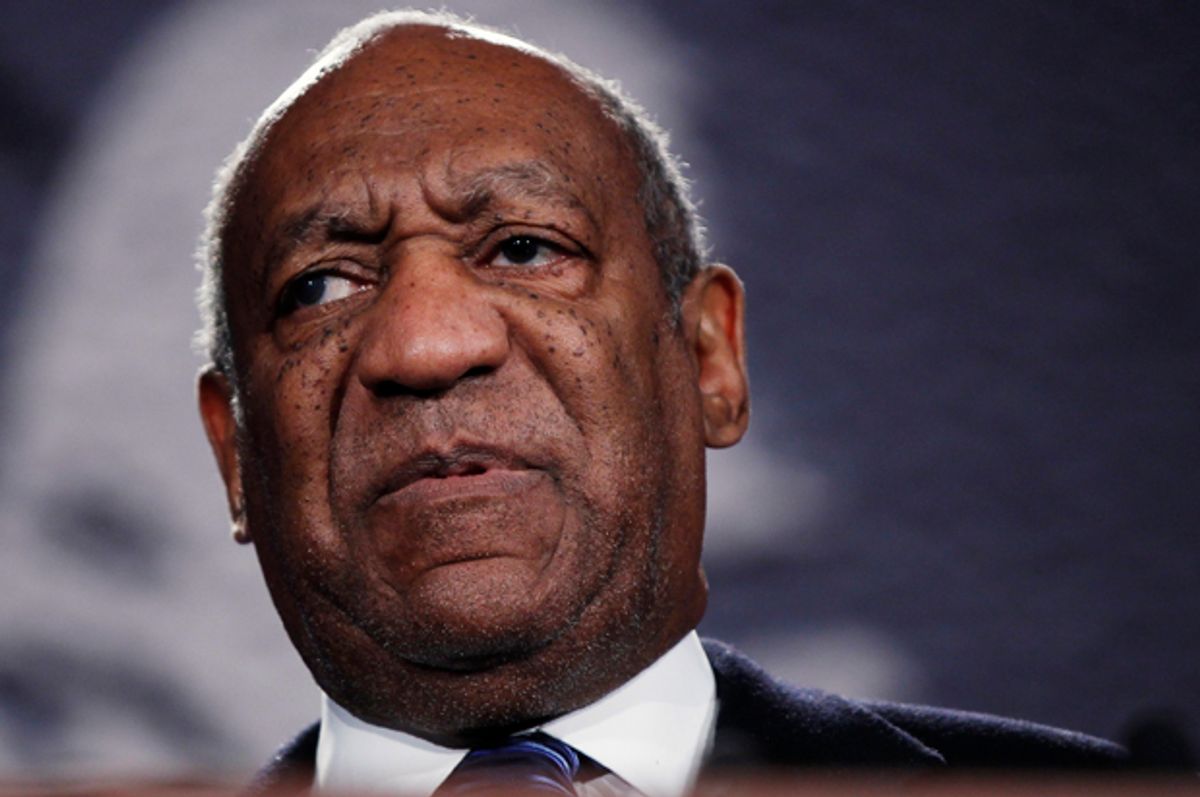 When I was a child, I loved to eat dinner in the kitchen, sitting at the family dining table, alone, while watching monster movies, "Sanford and Son," "Good Times," "The Jeffersons," and "The Cosby Show." My mother would obsessively wash dishes, leaning into the air conditioner during humid summer days; our dog, a black and white mutt, would lie on the linoleum floor, attentively waiting to see which of us would give him a treat. It was during one of the early evenings, my homework done, before I had rushed back to playing Nintendo, that I exclaimed about the wonders of "The Cosby Show," that the Huxtables were America’s greatest family, how everyone should have a dad like Bill Cosby.

My mother, having just thrown the dog a bit of bread and pulling up the sleeve of her winter robe to keep it from catching fire on the oven, poured her tea and threw some verbal darts. “You don’t have to look at the TV to find a role model or father figure. He is here, in this house, right now.”

I remembered that moment the other day when I saw the news that Cosby had admitted in a previously sealed deposition to drugging women in order to rape them. In all probability Cosby is a serial sex offender. Thus, the public scold of the black ghetto underclass may in fact be guilty of far worst “crimes” than wearing sagging pants or giving their children names that reflect an unfortunate deficit in social and economic capital.

As Salon’s own Brittney Cooper explained, much of the anger at Bill Cosby is rooted in how he betrayed the special trust that was placed in him by Black America. His most noteworthy enterprise, "The Cosby Show," was a shining exemplar of upward mobility, dignity, and a functioning black family. Now Cosby’s legacy has been called into question.

Americans on both sides of the color line are upset by Cosby’s behavior not exclusively because of the horrific nature of his crimes, but also because his failings have robbed many of them of an innocent and positive part of their youth. Being disabused of childhood nostalgia is one of the most painful parts of being (and becoming) an adult. But perhaps the focus now should be on the source of that nostalgia itself, and how the politics and values of "The Cosby Show," which were so attractive to so many and for such a long time, are based on a distorted and inaccurate presentation of the black community, one that has enabled a pernicious type of right-wing "colorblind" racism to flourish.

Television offers a distorted image of reality. It—and other types of mass media—are the primary means through which unreal and false representations of human social relationships are learned by the public. The family drama and situation comedy both provide excellent examples of this phenomenon.

"The Cosby Show" followed the day-to-day struggles and experiences of a rich black New York family called the Huxtables. The father, played by Cosby, was a successful obstetrician, and his wife, Claire, was a partner in a law firm. They had one son and four daughters. They hail from a long line of successful African-Americans who were graduates of historically black colleges. The show was a response to a white popular imagination that largely saw black and brown Americans as poor, as members of the underclass,  as criminal, or beaten down by racism -- and as such lacking agency, freedom, or upward mobility.

In many ways "The Cosby Show" was the anti-"Moynihan Report”—a much misunderstood and misrepresented exploration of “black ghetto poverty” and “the breakdown of the black family” written in the 1960s by the Labor Department. "The Cosby Show" was also a rebuttal to '70s TV producer Norman Lear’s popular shows -- "Good Times," "Sanford and Son," and "The Jeffersons" -- where the humanity and travails of black folks living in poverty (and escaping such conditions) were the dominant themes.

Popular culture is inherently political and ideological. While the depiction of a rich and “functioning” black family was superficially transgressive, "The Cosby Show" channeled a particular understanding of race, capitalism, “success,” and “middle class” identity that more often than not reinforced dominant American cultural norms and rules basically in line with the the Horatio Alger myth; it offered to viewers a harmless type of “diversity,” where blackness and the “Black experience” were massaged down into a throwaway mention of the March on Washington and Dr. Martin Luther King Jr., or the struggle to end Apartheid, or simple guest appearances for accomplished black musicians, artists, and actors.

For most of its 8 seasons, "The Cosby Show" existed inside a bubble that was outside of the day-to-day lived experiences of the vast majority of black Americans. The events in bubble were white fantasies of black folks’ lives.

"The Cosby Show" was set during the 1980s and early to mid 1990s in New York City. This was a tumultuous time of protest activity, anti-black and brown police harassment, brutality and killings, tensions between African-Americans and Koreans, anxieties about black “super predators,” “wilding,” the Central Park Five, the Crown Heights riots, and the racist murders and assaults on black youth by white racists in the neighborhood of Howard Beach.

In that context, consider the following:

"The Cosby Show" need not have been Spike Lee’s searing (and soaring) "Do the Right Thing" or a homage to Public Enemy’s video "Fight the Power," but those moments and events are the context and backdrop for the show. To ignore those happenings in an act of surrender to genre norms, or because of its cross-over success as one of the country's most popular television show, is an evasion of "The Cosby Show’s" responsibility to both Black America and the general viewing public.

The United States is a highly race-segregated and class-stratified society. (Seventy five percent of white people do not have one black friend.) Because of how separate and apart America’s neighborhoods, communities, and associational lives are from one another, television--with its distorted representations of black and brown folks’ humanity--is one of the primary ways that people in the United States learn about one another across lines of race and class. And "The Cosby Show" lied to its white viewers about the nature of racism, white supremacy, and white privilege in the post-civil rights era United States. It told them of a world of black millionaires—people who were “just like them.”

(This of course is separate from the fact that the Cosby family was likely part of the richest 1 or 5 percent of the United States population. "The Cosby Show" also ignores the particular ways that economic class is racialized in the United States, where the richest Black Americans often have wealth and assets that more resemble those of the white middle or working classes. Moreover, rich Black Americans are more likely to fall down to the bottom part of America’s economic hierarchy than they are to remain there inter-generationally.)

Only when fixed on "The Cosby Show" did the White Gaze see that black folks were not some type of Other, that instead they were “normal.” Affirming the humanity of fictional black people on a television show proceeded from an assumption that “real” black people were and are somehow alien and different. And that is profoundly racist.

At the same time, "The Cosby Show’s" erasure of white racism and its impact on the day-to-day lives of black people in the United States (from the rich to the poor) enables the colorblind white racist fiction and delusion that anti-black racism is a thing of the past. Moreover, the Cosby family was an African-American version of the model-minority myth, one of the favorite deflections and rejoinders of white racists in the post-civil rights era, where there are “exceptional” minorities and the rest are failures because they do not work hard, are lazy, and complain too much about white racism. While unintentional, "The Cosby Show" enabled some of the ugliest Reagan-era fantasies.

"The Cosby Show’s" black millionaires are examples of how the American media and collective consciousness views African-Americans through a bifurcated lens. There, black folks are either extremely rich (celebrities, sports stars, actors, actresses, hip hop artists and other musical entertainers) or poor and part of the ghetto underclass (black “thugs”, welfare queens, prison inmates). In reality, the vast majority of black Americans are working and middle class. That reality is not as popular as the outliers depicted by "The Cosby Show," in excellent television dramas such as "The Wire," or in the grotesque pathologizing of shows such as "The First 48" or "Cops."

As a child of the hip-hop generation, and a member of the black working class, I grew up loving "The Cosby Show." I had my own version of the “Gordon Gartrelle” shirt, had a crush on Lisa Bonet, can recite in short order my 10 favorite "Cosby Show" moments, and reenacted with my friends the wannabe b-boy and b-girl battle from season 1 of the show. Nevertheless, I have no shame in admitting that I have much more in common with the white folks on "Roseanne" or the black family on "Roc" than I ever could with the Huxtables.

The White Gaze gravitates to the black and brown rich and poor because its distortions, however different, of those folks’ lives fulfill the colorblind, post-racial, and yes, old-school racist fantasies about life on the other side of the color line. The White Gaze does not know what to make of the black middle and working class. In many ways, I prefer it that way.