My life of insufficient funds: Why is admitting you’re on public assistance so painful?

I may not look like someone who came from poverty, but without welfare, my mother and I probably would have died 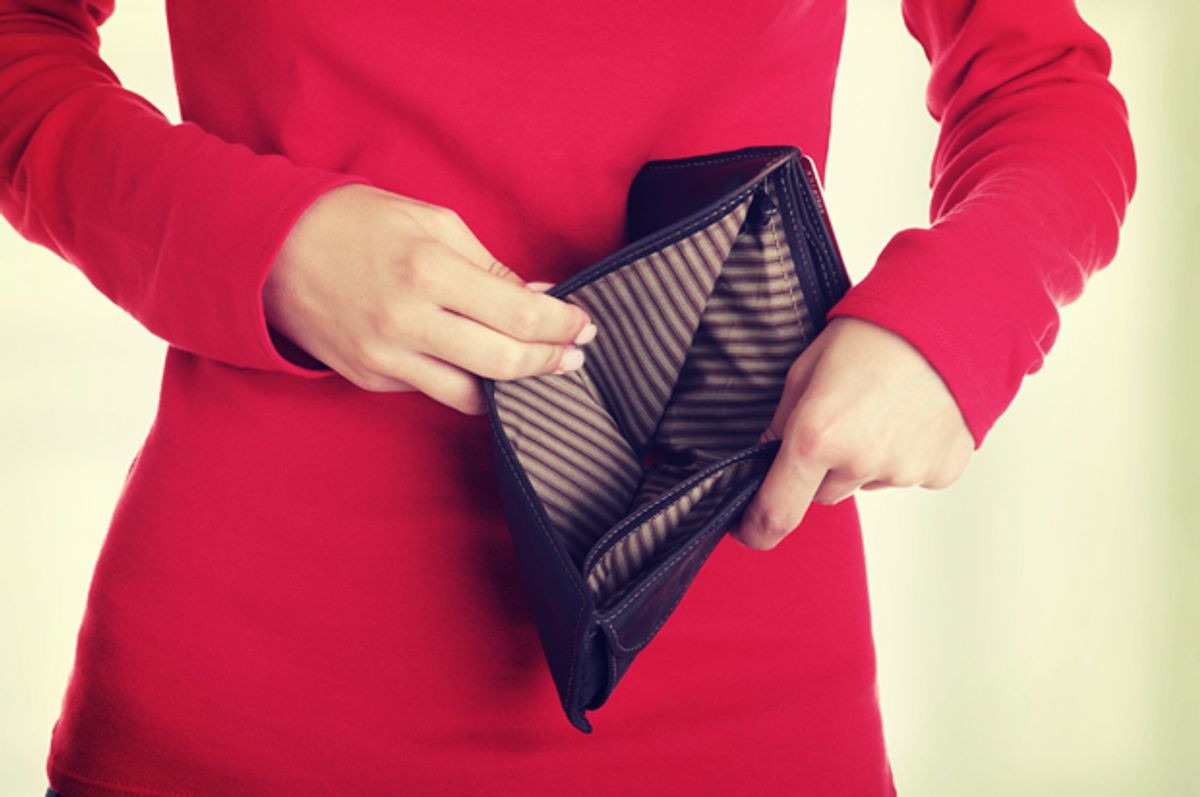 “Insufficient funds,” says the cashier. “Do you have another card you can use?”

I glance up from where I’m standing in line to see the cashier holding an EBT card in the air. There is a long, painful pause.

“This happens all the time at the end of the month,” he says, and I can tell from his voice he’s trying to be sympathetic. This is my nightmare, the scene I’ve replayed in my mind more times than I can remember. I bite my bottom lip, hard, and will myself not to shake. Don’t do it, I tell myself. Don’t look at the people behind you. Don’t let them see your face.

The woman in front of me in line bristles a little, then drops her shoulders, and leans in to whisper to the cashier. I can’t hear her words, but I know what she’s saying. They’re the words I’ve rehearsed a thousand times myself: I thought I had enough left on my card, I’m so sorry. I left my debit card in my other wallet … She trails off and the cashier nods and voids the transaction. He glances at me and I realize I was staring at him too intently. He’s a college kid with shaggy hair that hangs in front of his eyes. I can’t make out his expression, but I’m grateful he’s silent instead of snide.

Behind me, I hear muffled laughter. The woman is pulling the items out of her cart, apologizing for the inconvenience. “I could have sworn it was in my purse. How stupid of me.” She’s speaking louder now, and I know it’s because she wants the rest of us in line to hear. Her voice cracks on the word stupid and I feel nauseated. I lean forward and try to make eye contact, but she angles her face away from me. “I just wasn’t thinking,” she says. The cashier nods, uninterested. She and I both know he’s heard this before.

I understand, I want to tell her. I get it, I want to gesture to the EBT card clenched in her fist. I have one, too. I’m poor, too, but the words die in my chest. A supervisor comes to the register and starts to take back her groceries. Bags of frozen vegetables, cans of soup, and a few boxes of cereal. A family-size bag of popcorn and a carton of off-brand ice cream. I look down at my own basket and realize our carts are almost identical: neither of us has the notorious steak or lobster. I want to laugh, in a hollow sort of way, because I know no one receiving public assistance can ever afford such a luxury. I swallow and feel the people behind me shuffle in place. They are laughing louder now, and I know they are annoyed. Intuitively, I know they want the woman in front of me to feel judged and humiliated. That could be me, I think, and I want to cry.

I lift my eyes back to her, but she is gone. The cashier is staring at me, and as I put my items on the belt, the man behind me in line peers over my shoulder. “Look at all that stuff she had in there, huh? Bet you wish you could take all that home for free.” He laughs and I turn a dark red, barely meeting his eyes. He is a tall, stout man in his 50s. He is old enough to be my father, and I know he thinks he is being friendly; paternal, even. “You and me both, hon,” he says. He smiles widely and I stare at his bright white teeth. As he winks at me, I watch the sunburnt skin crinkle on the bridge of his nose. I am mortified. I want to bolt from the store but I know we have no food at home, and I can’t return empty-handed.

I see myself in the stranger’s eyes, and I know he thinks he and I are the same. I am a young white woman with an expensive looking dress I bought at a thrift store last summer.  I have an EBT card, too, I imagine myself telling him, taking ownership of my identity. After all, what is there to be ashamed of? I wonder what it is, exactly, about receiving public assistance that humiliates me so deeply. I work hard, I want to tell him. I’m working two jobs this summer, and I’m starting college in the fall. Instead, I merely smile back at him and shrug. Moments later, I slip the cashier my EBT card, and the cashier looks surprised, then confused. Still, he swipes it without a word, and to my relief, it’s accepted. When I exit the store, I don’t let myself look back.

On my walk home, my emotions rush between shame, fury and sadness. Stupid. I hear her a voice in my head on repeat, and it sounds defeated. Stupid, stupid, stupid. I stop to catch my breath and realize I’m close to tears. The spectacle shook me, and I feel self-conscious and gauche. I’m infuriated at the stranger behind me for his words, but I’m not surprised because for me, it’s nothing new: I’ve grown up hearing those judgments about poor people -- people like me -- receiving welfare.

Growing up, my deepest fear was someone discovering that I lived in poverty. If my mother and I didn’t have a housing voucher, we would be homeless. If I didn’t qualify for free lunches at school, I wouldn’t eat. If my guidance counselor didn’t help me obtain fee waivers for my college applications, I simply wouldn’t have applied.

Years later, I am at brunch at a new, hip cafe with my friends. I no longer receive public assistance, but in my mind, I still feel poor. Though I want to socialize with my friends -- making memories, they call it -- I experience little joy or relaxation in the act of spending money. Looking at the menu, I can’t help but divide the cost of the cheapest dish by how many meals I could make at home. I notice there are no free refills on the coffee, so I bypass it. We’re commiserating about our work weeks, how tired we all are, and seemingly out of nowhere, the topic of welfare arises.

“Sometimes all the work just doesn’t feel worth it,” my friend says, and the table nods. He laughs a little, and continues, “I gotta say, sometimes I want to quit my job and live off of the system for a little while. Free apartment, free food, and no work? Can’t beat that.” Someone claps in agreement and everyone at the table laughs. Except me.

I feel like I’ve been kicked in the throat. In that moment, it takes a lot of willpower not to hate my friends. A voice in the back of my head whispers, tell them the truth. These are your friends. Give them some credit.

Finally, I push myself to speak. “It’s not easy,” I say, and their heads whip in my direction. I feel myself turning pink under their gaze. “Receiving public assistance just helps you get by. You aren’t living easy or anything, not really.”

Everyone is quiet for a minute, and I fight the urge to vomit into my lap.

“I dunno,” a different friend says, and her voice is slow, drawn out, like she’s working through her thoughts. “I mean, if living off welfare is so hard, why do people do it for so long? Wouldn’t it be easier to just … you know, get a job?” I stare into her eyes and I see a strange mix of fear and wonder. I know in spite of her words, she isn’t trying to be hurtful. I have a strong urge to both hug and slap her. I do neither.

“Well,” I start slowly, and I am horrified to hear the quiver in my voice already. Don’t cry. Don’t panic. “A lot of people receive benefits for a few months or maybe a year, when they’ve been laid off, or when they’ve experienced some trauma keeping them out of work.” I pause and my friends nod. I can sense they think what I’m saying is reasonable, so I continue cautiously. “My mom and I, for example, we received public assistance since I was a kid.  My dad never paid child support, so it helped us a lot. We probably would have died without it.” I laugh a little, because I want to keep the mood light. I force a wide smile and try to ignore the tight anxiety gripping my chest.

I take a deep breath and hope the conversation will die there. I blink and see four sets of eyes staring back at me. No such luck.

“What did your mom do for work?” my friend presses. Her eyes shift: I read curiosity, confusion, and behind that, hints of sympathy.

“My mom ... she didn’t really work,” I begin, dropping their gaze. I focus on my empty glass and wish I had another drink. “She had a lot of issues. Drugs, that sort of thing.” I pause and listen to the buzz of the restaurant around us. Why am I doing this? Why can’t I keep my mouth shut? I am furious with myself, but I press on. “She abused painkillers for a long time, was an alcoholic for a while. Over the years, it all made it really hard for her to keep a steady job.”

After a long pause, I glance up to see my friends nodding. To my relief, no one looks disgusted. Instead, they look baffled. In that moment, I want to crawl under the table and hide.

Later, on my walk home, I wanted to cry. I felt vulnerable and exposed. What’s worse, I suddenly felt like I had so much left to say and had no one there to listen. The conversation brought me back to feeling as misunderstood and isolated as I had as a child, and I was frustrated with myself for my role in the conversation, too. I knew my friends were proud of my ability to work myself out of poverty and probably saw me all the better for it. And yet, when I think back to that woman in the grocery store, I still feel remorse and frustration: Why hadn't I spoken up then? The shame of poverty stands in the way of building any solidarity. For me, loneliness feels synonymous with being poor, and that sense of isolation is chilling.

I've come to realize it's easier for people to stomach listening to the details of poverty once the speaker is out of poverty, but I also know that it was mostly luck, not hard work, that helped me break the cycle. If I hadn't been lucky enough to receive certain attention and opportunities in my youth and adolescence, I know I would likely still be in abject poverty, and that if I had the same friends — which would be unlikely — the last thing I could afford would be a brunch with bottomless mimosas. I worry, too, that rags-to-riches stories supersede the more honest narrative of the working poor. I wish others felt comfortable telling their story, so I’m starting to share mine.

Marissa Higgins is a freelance writer based in Washington, DC. Her personal essays, which primarily explore poverty, LGBTQ themes, and women's issues, have appeared in Guernica, New York Magazine's Bedford + Bowery, and The Huffington Post.