Ack! After a more than 25-year hiatus, Berkeley Breathed's beloved comic comes back 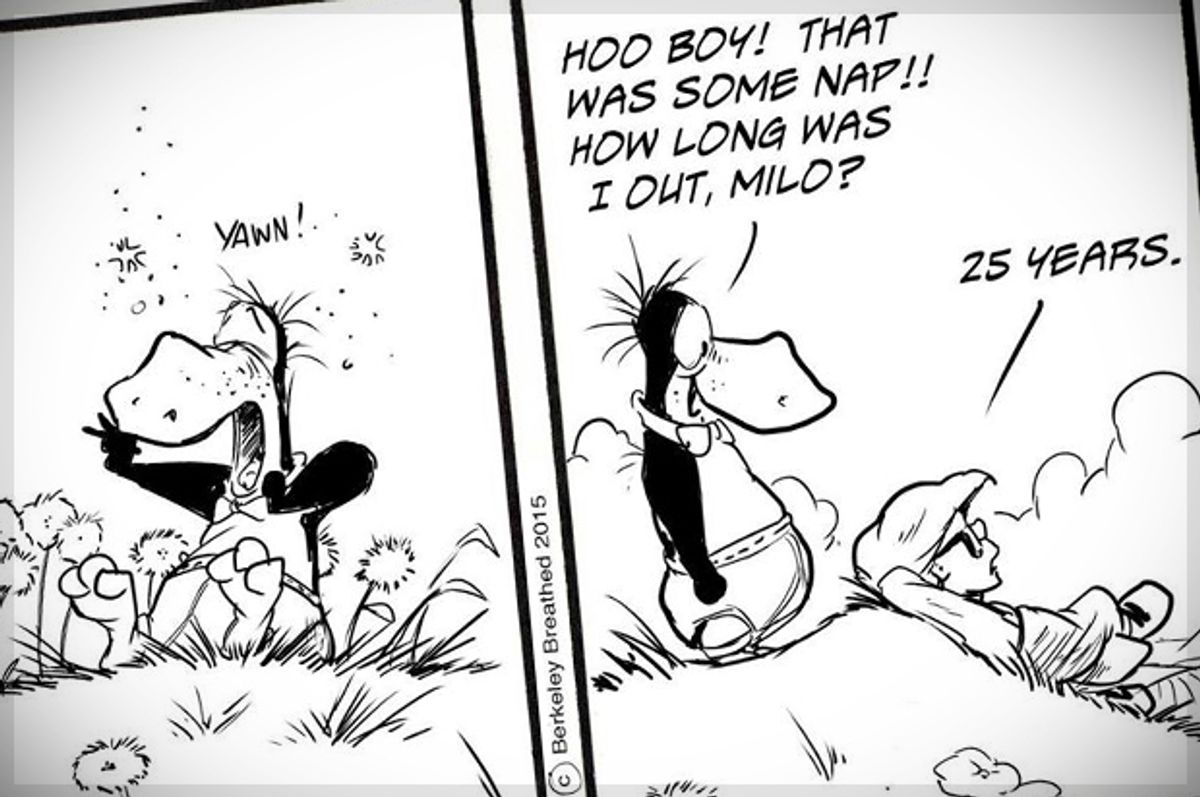 You should give thanks to Donald Trump. No, seriously, thank him. Sure, he still comes up with new ways every day to secure his place as one of the most offensive humans on the planet, but he's a limitless source of material for comedy. I know that when he started hinting about running for president, I was thrilled, secure in the knowledge that I'm going to be laughing from here until at least his next epic election night meltdown. But he hasn't just given the writers of "Saturday Night Live" and "The Nightly Show" a great big barrel full of fish to shoot. He's done something so amazing it hadn't even occurred to most of us as a possibility. Donald Trump appears to have helped inspire the return of "Bloom County."

For you millennials who are wondering why The Olds in your Facebook feed are currently jumping up and down with happy shock, it's because Berkeley Breathed's wry, savvy comic strip — which ended its nine-year run 26 years ago, started showing signs of life again on social media on Monday. I'd like to think that somewhere in a two dimensional universe, a hungry beagle and a playful stuffed tiger are applauding wildly a sweet penguin and a Hunter Thompson-esque burnout feline as they re-enter the ring. Welcome back, Opus, Bill the Cat, Milo Bloom, Steve Dallas, Cutter John. Welcome back, everybody. I hope you'll stick around.

Breathed's Pulitzer-winning strip — a slice of social commentary viewed through the human and animal characters of small town America — was a beloved piece of essential daily reading in its eighties heyday. It wasn't all droll politics and pop culture observation though — it was about life and relationships. Also, to this day, I think of Opus every time I get a bum banana. Its quirky, goodhearted sensibility permeated its entire world. Back then, of course, that world existed entirely in the world of ink and paper. What followed after "Bloom County's" ending were, for years, tantalizing smaller glimpses into Breathed's universe of characters, first via the Sunday spinoff strip "Outland," which debuted a month after "Bloom County" ended and ran for six years. It was followed eight years later by the syndicated Sunday strip "Opus," which stopped in 2008.

In recent years, Breathed has maintained a fairly low-key Facebook presence, popping in mostly to post vintage strips. But then last week he mentioned he'd be at Comic Con, "hoping to meet all of you and and sign your Bill the Cat ass tattoos." And then when a fan commented on his page "Need to bring back Bloom County!" he cryptically replied, "Watch this space." It was a low rumble that soon turned into something more. On Sunday Breathed posted a photo from Comic Con of Harrison Ford snogging Bill the Cat and joking, "Our pal J.J.Abrams cast him -- against type, I think -- as Sith Princess BoobalooACKTHBBFT." More significantly, he also shared a picture of himself at his computer, in front of a panel that read "Bloom County 2015," with a message that "A return after 25 years. Feels like going home."

And when a commenter observed, "Dear Mr. Breathed.With Donald Trump returning to the Political Spectrum, I believe it is only fitting. I have missed you guys," Breathed, who enjoyed many a laugh at the entrepreneur back in the "Art of the Deal" days, replied, "This creator can't precisely deny that the chap you mention had nothing to do with it." Thus Sunday became the day Donald Trump accomplished something useful.

On Monday, a full new four panel strip emerged, with Opus waking up from a very long nap next to pal Milo, who casually tells the skeptical penguin that he's been out for 25 years. It was a simply shaking out of the cobwebs, a gentle joke, classic "Bloom County." And it was good. Speaking to the New York Times via email, Breathed expressed an intention to continue publishing, and to continue doing it online. "I’ll publish on Facebook, as that’s where my old school readers can reach me," he says. "I want to hear from them — hear how my characters played a role in their lives — hear how they might still. Those of us lucky enough to be granted such a role should thank our fans daily (Harrison Ford finally got that memo). The return of Opus and the old gang is my way." The return will likely not be at the 58 year-old creator's former pace. He adds that "Newspapers need deadlines, alas. Like my departed friend Douglas Adams used to say, the only part of deadlines I enjoyed was the whooshing sound as they sped by." Okay, so no more deadlines. Just more stuff, please?

The world has changed a great deal since 1989, and it's safe to imagine that the citizens of Bloom County have as well. But so far, they seem to have retained their charm. And while they have plenty of other things to talk about than Donald Trump, I can't wait for a new generation of fans to discover what a penguin and his friends have to say about The Donald, and so much more. As Breathed says, "Silliness suddenly seems safe now. Trump’s merely a sparkling symptom of a renewed national ridiculousness. We’re back baby."