The new sex therapy: Kink -- even infidelity -- can rekindle a marriage 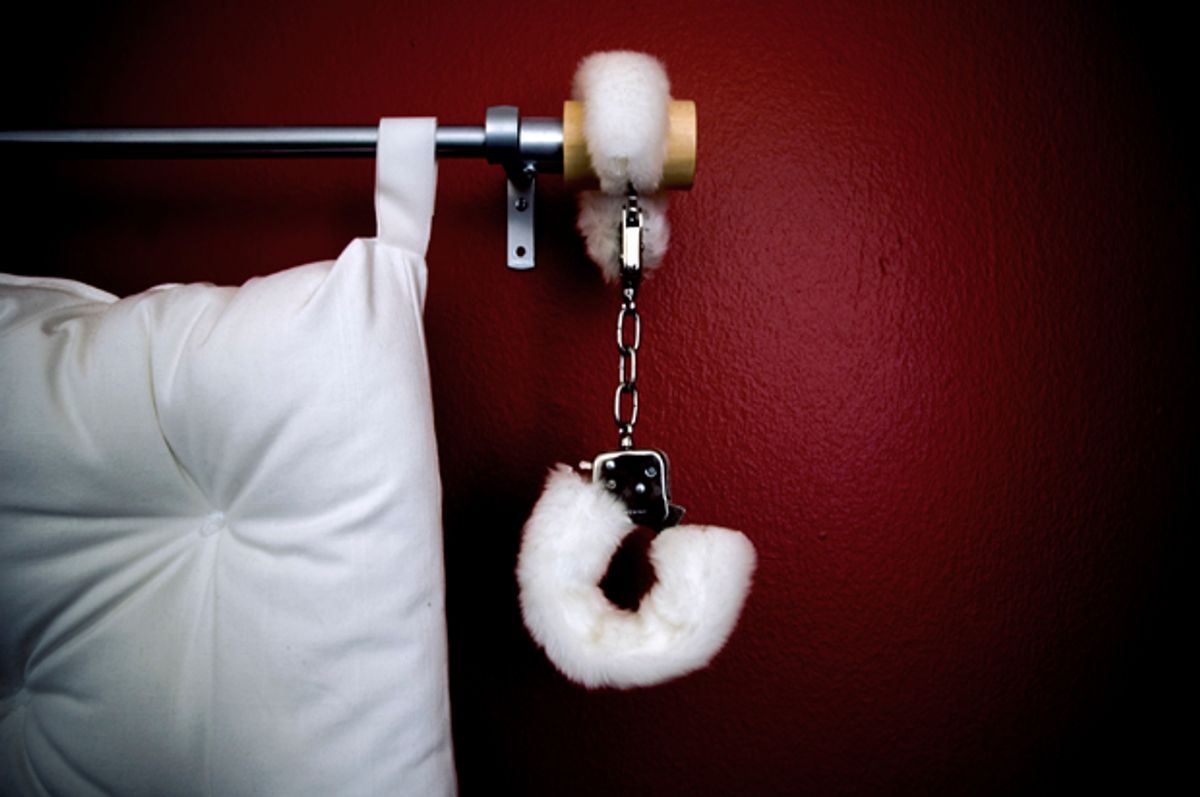 Americans have traditionally been prudish about sex, but in the midst of a more frank emerging dialogue about desire, one that includes being honest about what kind of sex we want and exactly how we want it, a new crop of influential couples counselors have come to prominence. Instead of relegating sex to the margins of the therapeutic process, they’re emphasizing its centrality to our relationships and suggesting that sexual happiness, within or beyond the borders of monogamy and matrimony, is key to couples’ contentment. As Amy Sohn notes in a recent New York Times piece on the issue, these sex therapists “speak on topics like affairs, 'gender-queerness,' transsexual identity, kink, BDSM and pornography,” and they are changing the couples therapy model from a focus on healing bad feelings to putting sexual healing front and center.

Key to this discussion is infidelity, which is both increasingly commonplace yet potentially devastating for so many couples. Esther Perel, a Belgian-born therapist, has become a go-to expert on why people cheat, including the 56 percent of men and 34 percent of women who do so even while reporting they’re happy in their marriages. One of sex therapy’s most popular and recognized voices, Perel believes cheating can redeem instead of destroy a relationship. In a TED talk from March titled "Rethinking Infidelity" that has garnered more than 2 million views, she discusses how cheating is more common than ever because its parameters have widened with technology. “[W]hen we say 'infidelity,' what exactly do we mean?” Perel asks. “Is it a hookup, a love story, paid sex, a chat room, a massage with a happy ending?...[T]he definition of infidelity keeps on expanding: sexting, watching porn, staying secretly active on dating apps.”

Perel posits that the modern idea of coupling, which insists people be all things to their partners and a mirror reflection of their most complete selves, has made infidelity even more consequential. “We have a romantic ideal in which we turn to one person to fulfill an endless list of needs,” the therapist says. “[T]o be my greatest lover, my best friend, the best parent, my trusted confidant, my emotional companion, my intellectual equal. And I am it: I'm chosen, I'm unique, I'm indispensable, I'm irreplaceable, I'm the one. And infidelity tells me I'm not. It is the ultimate betrayal. Infidelity shatters the grand ambition of love. But if throughout history, infidelity has always been painful, today it is often traumatic, because it threatens our sense of self.”

Shannon Sennott, a psychotherapist and clinical sex therapy associate at Translate Gender Inc., further explained to me how cheating, as mere fantasy or in actual deed, and the desire to speak openly and without judgment about the sexual wants that can prompt it, has brought increasing numbers of well-heeled couples to sex therapy. “I don’t think it’s any surprise that the thing that’s bringing sex into the light is the idea of infidelity,” says Sennott. “People with the privilege to think about this stuff and talk about this stuff are opening up their relationships, or talking about non-monogamy, talking about polyamory. I think that that’s the push for people to be talking to sex therapists. Because sex therapists ... aren’t going to stigmatize the relationship. I think that the door, the sort of gateway drug to sex therapy, is a desire to not be punished for having attractions to other people.”

Along with others Sohn describes as the “renegades of couples therapy” in her NYT article — a “sex-forward” group that includes “Suzanne Lasenza, Margie Nichols, Jean Malpas, Marty Klein, Joe Kort, Arlene Lev, Marta Meana and Tammy Nelson”— Perel and Sennott are helping couples rethink societally imposed sexual mores, gender identity, sexual ethics, turn-ons and kinkiness, gender roles, and long-held notions that can stifle fulfilling sexual expression and connectivity in couples of every kind. Encouraging this kind of sexual candor represents a break with the standard couples therapy model, which is often mum on such topics.

But that’s changing, Sennott confirmed, telling me about the shifts she’s observed over the last few years in her own practice. “I see a lot of people who identified as women coming out to their husbands as queer, or attracted to women, but not just ‘I want to have sex with a woman and let you watch’ but ‘I want to have a relationship with a woman and fall in love with a woman.’ Which is polyamory, not non-monogamy. The thing about everything being a little more out in the open around same-sex experiences and same-sex desire and kink and BDSM is that people, especially women—those who identify as women — are finding a voice to say, This is something I’m really interested in."

Tammy Nelson told the Times that she helps couples rewrite rules around sex and how they define fidelity, depending on what they’re comfortable with. The psychotherapist guides clients in establishing agreements about sex, “which can include extramarital sex on weekends or extramarital sex but only together." What’s key is that couples establish what is and isn’t okay. “I describe monogamy as honest, perpetual dependency of some type,” Nelson says in the article. “It can be whatever a couple wants, but it has to be fluid and flexible, and the couple has to keep renewing it, like a license.”

Perel, who in her TED talk takes apart the idea that “there is such a thing as a perfect marriage that will inoculate us against” infidelity and suggests that “passion has a finite shelf life,” claims that affairs can open up new and unexpected spaces for both traditionally monogamous couples and those in open relationships. “I've noticed that a lot of couples, in the immediate aftermath of an affair, because of this new disorder that may actually lead to a new order, will have depths of conversations with honesty and openness that they haven't had in decades,” Perel says. “And partners who were sexually indifferent find themselves suddenly so lustfully voracious, they don't know where it's coming from. Something about the fear of loss will rekindle desire, and make way for an entirely new kind of truth.”

Sennott asks her new clients to write up a sexual history, including hidden or unspoken desires. “After a year of working with a couple, maybe I’ll say, ‘So, in your sexual history we did at the beginning of this, you did mention that you were kind of interested in getting tied up. Do you want to talk about that? Should we talk about resources for you? Do you want to talk about what that would look like?’ And by then, you kind of inoculate them early, by doing a sexual history, and over time, they become [able] to differentiate themselves from each other and one can say, ‘Yeah, I really want to tie her up,” and the other one can say, 'I really want to tie him up' and he can say, 'I am or I’m not down with that.'"

Just as often, Sennott says, her work involves simply giving people a language for how to discuss sex and intimacy. “I’ll ask people, what do you call these parts of your body? And oftentimes, people have no words. None. And they don’t talk during sex. They don’t have any way of checking in with each other about if something’s pleasurable or not,” she says. “Men are taught that they’re just supposed to know without having to ask...Men [early on] don’t talk about how to have sex, they talk about ramming someone. They look at porn. They don’t see what intimacy looks like through anything in their culture growing up. And men don’t feel like they’re allowed to ask, or they want to give their wives privacy. And then they come in [to therapy] and they’re really, really excited to learn all these new ideas. And typically, it’s not that there’s anything, 'wrong' with [their wives]. It’s that the kind of sex that they’re having is totally unenjoyable because nobody ever taught that guy how to have sex. So, it’s just about educating people around how people avoid having intimacy by having standardly classic sex. And just normalizing all of that can make such a huge difference.”

As for Perel, whose latest book has the working title, "Affairs: Cheating in the Age of Transparency," she offers the following advice about bouncing back from infidelity, an insight that ultimately seems applicable to any severe rupture or heartbreak a couple might endure.

“I look at affairs from a dual perspective: hurt and betrayal on one side, growth and self-discovery on the other — what it did to you, and what it meant for me. And so when a couple comes to me in the aftermath of an affair that has been revealed, I will often tell them this: Today in the West, most of us are going to have two or three relationships or marriages, and some of us are going to do it with the same person. Your first marriage is over.”

Pausing for effect, she then asks, “Would you like to create a second one? Together?”