Wall Street's sinister disappearing act: How it still endangers America — while Washington looks the other way

As the 2016 election ramps up, inequality is on everybody's mind. But nobody wants to get serious about finance 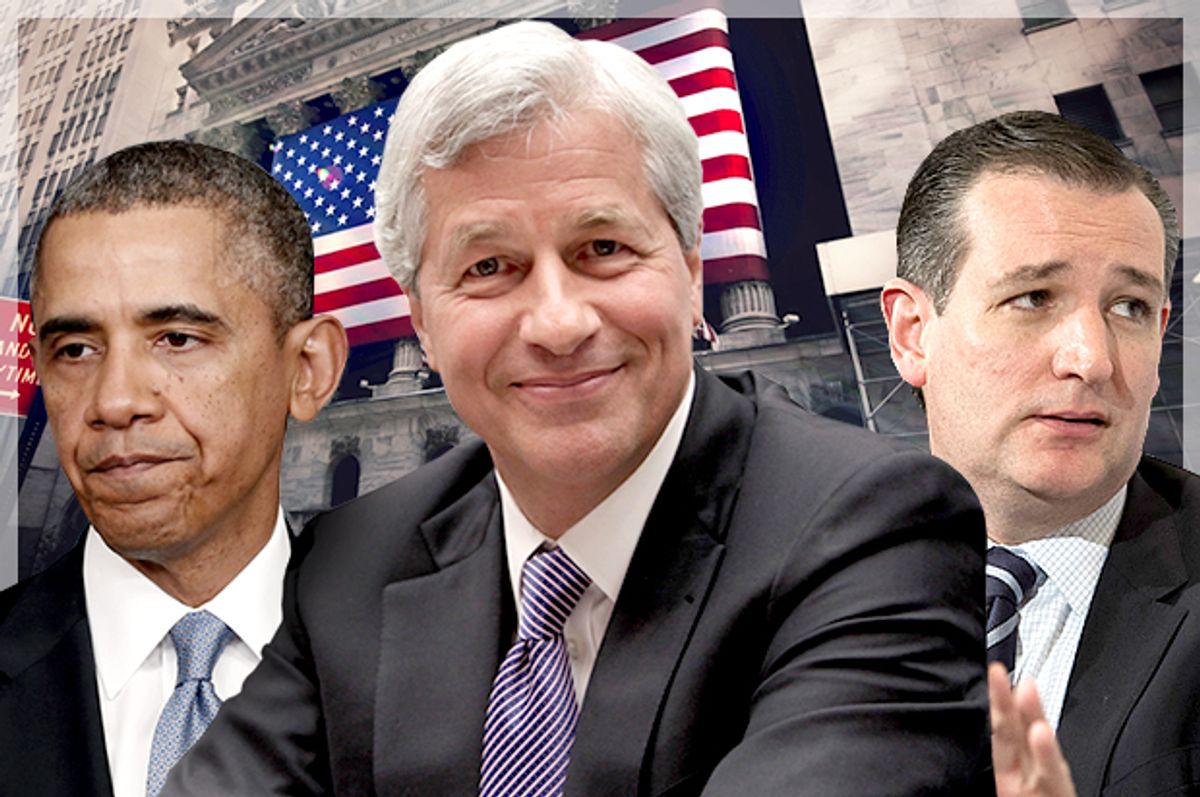 The landscape of issues that will define the 2016 presidential election is taking shape. Liberals should be relishing an emerging core issue: the 35-year trend of growing economic inequality and essentially flat or declining wages for most Americans. Even Republican presidential hopefuls facing an energized far-right in the party’s primaries are talking about inequality. None other than Tea Party favorite Ted Cruz has seized on the liberal mantra of the “rich getting richer” as he decried the struggles of the young, single moms, and Latinos.

Of course, this is not a harbinger of bipartisan consensus. Cruz’s solution for inequality is to repeal the Affordable Care Act and Marco Rubio’s is to pool federal social-safety net funds and block-grant them to the states. On the other side of the aisle, the White House pushes a higher minimum wage and affordable childcare. And everyone likes the idea of education and training, not troubling themselves with Paul Krugman’s concern that the economy may not provide jobs for these newly skilled workers.

Yet, a common denominator bridges this gaping partisan chasm: Both sides ignore the role of Wall Street as a driver of inequality. In one sense, this is curious. If there is one group that is consistently among the least trusted and most disliked, it is the banks. Linking the core economic issue, inequality, to Wall Street makes for obvious populist appeal.

It’s true that much political blood is being shed in financial reform battles, with conservatives seemingly hell-bent to deregulate the industry responsible for the disastrous 2008 financial crisis by repealing the Dodd-Frank Act one provision at a time. But that particular drama is unfolding within a very narrow focus on systemic stability and safeguards against future crises. Wall Street’s role in inequality is a differently colored horse.

The missing link in the inequality debate is not financial stability, but financial domination of the broader economy, what has come to be called “financialization.” Financialization, as a new Demos report demonstrates, is not only measurable by risk and volatility or by the mere expanding volume of financial activities; rather, it should also be  measured by how the non-financial economy—the economy of jobs and wages, production and enterprise growth—is increasingly distorted by institutionalized financial incentives and the pursuit of financial returns. Financialization is about the growing misalignment of managers and business models and strategies, at the expense of workers and their communities, broader social needs and goals, and even long-term investors.  Any presidential candidate who is serious about reducing inequality and restoring opportunity in America should begin the debate here.

Today’s financial sector absorbs a far greater share of the economy than it did 35 years ago and investing in financial sector growth is a poor way to directly generate jobs. However, far greater negative consequences of financialization permeate the economy. By altering the way the system allocates capital and propagating a culture of rent-seeking, finance has inflated incomes at the high end and depressed all other incomes. Rents are profits earned not through competitive market forces but rather through rigged gaming of the market itself. In the 19th century European agriculture economies, the aristocracy exercised market power by controlling the land. In America toward the end of the industrial revolution, monopolistic ownership of production was added to the mix, resulting in the Gilded Age that receded only after the trust-busting Teddy Roosevelt and progressive regulation reined-in the predatory power of the Robber Barons. Today, big finance is highly concentrated and dominates the trading markets for capital investments, influencing the practices of investors and board rooms through a new form of market power derived from advanced technology and quantitative analytics. Power over commercial markets, as the Robber Barons wielded, creates damaging opportunities for rent extraction. But market power over capital intermediation, society’s mechanism for deciding what to invest in, is far more concerning. Indeed, we have embarked on a second Gilded Age of structural inequality, led this time by the rentier banks and corporations that behave increasingly as if they were hedge funds rather than manufacturing or service businesses.

The new Demos report lays out ample evidence of this. NYU economist Thomas Philippon finds that we now pay much more for financial middlemen than we should, despite dramatic technological advances, and that drains about $280 billion annually out of the economy. This is profit from rent seeking activity. Using a market price/earnings factor of 15.5 (a commonly used multiple that converts annual profit into market value of equity), the implied size of this financial rent-seeking business in terms of share value is more than $4 trillion, larger than the 15 largest non-financial firms in the United States and more than 15 percent of aggregate market capitalization of U.S. businesses.

This $280 billion in rent is split between shareholders and a few thousand executives earning insanely large bonuses. In the United States, about half of the top 0.1 percent households in terms of wealth are neither old money nor stars of entertainment or sports nor self-made entrepreneurs. They are “super-managers,” the term used by Thomas Piketty in "Capital in the 21 Century" to describe the new age executives whose paychecks alone are enough to propel them into dynastic wealth.

The Demos report links both the supermanager phenomenon and declines in corporate investment that would provide jobs and income to the middle class to the financial sector. Since 1980, the way capital is allocated among possible uses has changed dramatically. Banks rarely make loans to corporate America and they prefer to sell off the consumer loans they make rather than hold them. Trading markets have come to dominate capital raising. Companies rely heavily on stocks and bonds that are traded back and forth constantly allowing investors to move in and out of investments at will (this is called “liquidity”). Investors and their advisors think much less about holding investments over a long term  concentrating on tomorrow’s price moves even at the expense of long-term returns. The dominance of liquidity has created investment short-termism.

The rising short-termism of the supermanager CEOs is even more acute than that of the shareholders they represent. Increasingly, managers are paid through stock options and similar schemes. This phenomenon arose in the 1980s, as shown in the chart below, and has spread to hundreds of the largest companies. The wealth of CEOs is largely tied up in options to buy their company’s stock at today’s price sometime in the future. This leads them to run their businesses with a view to stock price instead of using sound strategies for enterprise growth. Unlike institutional investors, super-manager wealth is not comprised of a diverse portfolio that might allow for some patience. As a consequence, they avoid R&D and expansion, investments that take years to pay off (see the chart below). They even use profits, by far the cheapest form of new investment capital, to buy back company shares instead of expanding to generate jobs or paying workers more. Walmart spent $7.6 billion in 2012 for its own stock, and an additional $5.4 billion on dividends. A total of 76 percent of its profits went to shareholders. If Walmart had invested these profits in its workers instead, the average employee would have received a $5.83 per hour raise. Walmart is not alone in escalating such tradeoffs between shareholders and workers: as William Lazonick finds, between 2003 and 2012, more than 90 percent of the total profits of the 449 firms listed in the S&P 500 went to shareholders. Unlike their corporate CEO cousins, financial sector super-managers typically hold current income shares, such as annual bonuses, that last as long as they are employed. They are incentivized to grow their financial institutions as fast as possible during their tenures, often taking excessive risks along the way. As we have seen, they even risk engaging in predatory practices that directly damage victims, most often in communities of color. As the non-financial sector shrinks by avoiding R&D and expansion, the financial sector grows wildly, stumbling from bubbles to busts and engaging in predation along the way.

The richest among us, who can ride the roller coaster up and protect themselves when the inevitable peak is reached, make out in this economy. For the 90 percent of households that depend almost wholly on wages the story is very different. Over the past 35 years, wage income as a share of total national income has drifted downward for the first time since the Great Depression. As shown below, this is even worse if we exclude the huge wages of the super-managers, which are qualitatively different from the wages of typical workers. As the share of income attributable to labor has decreased, the share of income derived from capital investment has increased. The problem is that capital ownership is deeply unequal. Edward Wolff finds that the richest 1 percent of Americans own 50 percent of the stocks and mutual fund assets, while the bottom 90 percent own only 9.1 percent. By contrast, 59.2 percent of the all home assets are owned by the bottom 90 percent as well as 73.5 percent of debt. Saez and Zucman tell us that the bottom 45 percent, many of whom are members of communities of color who still suffer from consequences of predatory financial practices, owns almost no assets after debt is deducted.

Tackling inequality means eliminating the financial sector’s hold on business by substantially limiting what activities it engages in, not just how it conducts its business as Dodd-Frank does. But neither party is well-positioned to accomplish this. Liberals are hesitant to institute severe limitations and conservatives are ideologically hobbled in considering answers that involve regulation. Advocates of limiting finance do so without support of leadership. Indeed, finance appears to be an issue that separates insiders and outsiders, more than right or left. Reviving middle-class prosperity requires long-term, broad-based investment in the economy. That can’t happen until politicians curb Wall Street excess. But Wall Street spends more than $1.4 billion in election cycles on campaigns and lobbying and political insiders are loathe to bite the hand that feeds them so well.

Wallace Turbeville is a senior fellow at Demos.