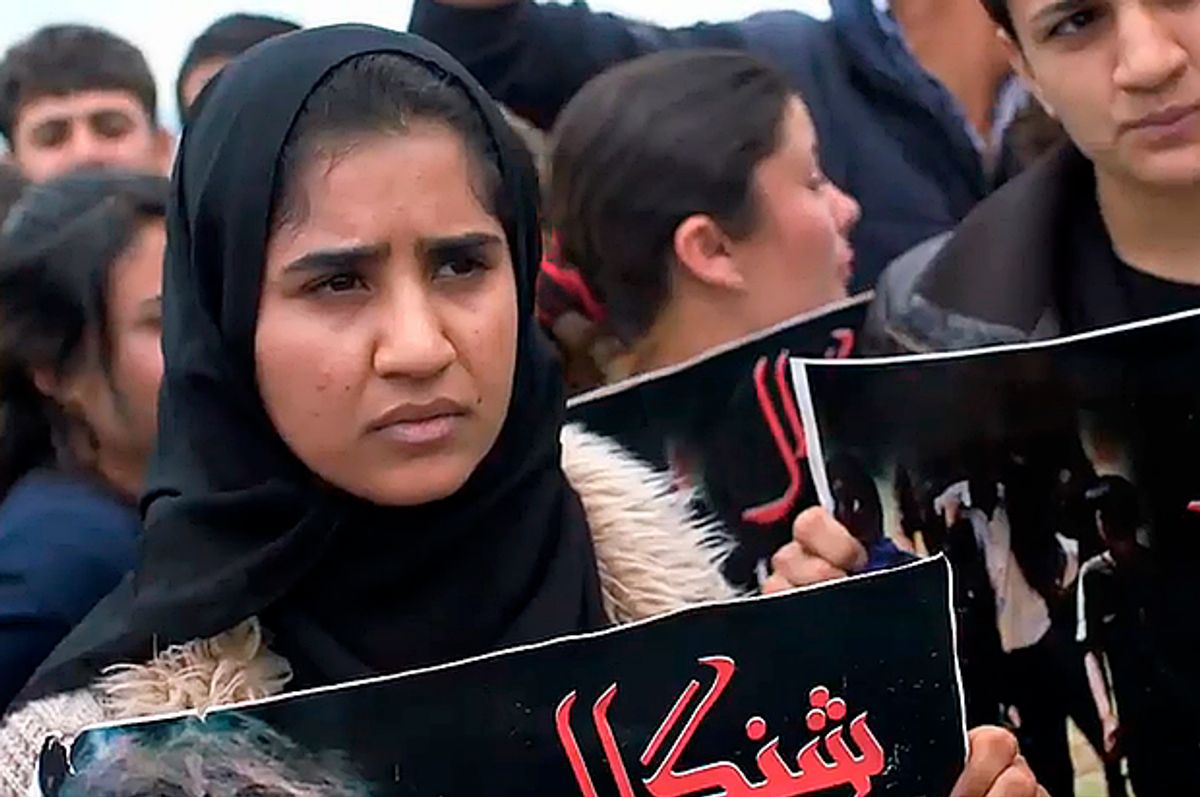 The Internet briefly fell for a hoax on Monday that quoted Sylvester Stallone as saying the next “Rambo” film would feature ISIS as the proverbial bad guys. Stallone said no such thing, but it’s not that hard to imagine—“Iron Man” took on some version of al-Qaida, when Tony Stark (Robert Downey Jr.) was held captive in the first film, and comics legend Frank Miller published the controversial “Holy Terror” in 2011 as an attempt to bring superheroes directly in conflict with al-Qaida, our enemies of freedom.

But it never really stuck. Marvel’s chosen villain these days, across all of its platforms and stories, is an updated version of Nazis—the reasoning being that Nazis can always be unmitigated evil, and no one will complain. DC comics jettisoned “Holy Terror,” which was originally conceived of as “Holy Terror, Batman!” and even Rambo won’t be bothering to take on Islamic terrorists. Our narrative consciousness has evolved a bit past faceless Stormtroopers and nameless communists; years of antihero dramas and deconstructions of the enemy have made the viewing audience far more aware of how limiting and damaging a dichotomy can be.

And yet ISIS might be the terrifying insurgent organization that is the most suited to be our faceless, identity-less bad guys, because they want to be our bad guys. For a religious and political movement that is violently returning a swath of land bigger than the United Kingdom back to the Islamic norms of the seventh century, ISIS is sure fond of Hollywood. The Islamic State uses stills from Darren Aronofsky’s “Noah” on its recruiting fliers, basking in the imagery of what it believes to be the impending apocalypse. As Graeme Wood wrote in his magnum opus for the Atlantic, “What ISIS Really Wants,” "a recent propaganda video shows clips from Hollywood war movies set in medieval times—perhaps because many of the prophecies specify that the armies will be on horseback or carrying ancient weapons."

And it’s not just special effects that the militants are fond of. Another video is cut and filmed like a Hollywood trailer, and as Wood’s piece and other accounts from journalists detail, the politics of ISIS is one of textual interpretation and adopted narrative. ISIS is motivated by what they believe to be prophesied in the Quran; its militants are inspired by the rhetoric of bloody glory in an apocalyptic war. Wood observes that one of the clerics he’s speaking to would not be out of place at a “Lord of the Rings” fan convention—fantasy is fantasy. Following Lawrence Wright’s long, dread-inducing story about five hostages taken by ISIS—including James Foley and Peter Kassig, both beheaded on-camera—it is not difficult at all to see ISIS as the incarnation of pure, wrongheaded evil, the quintessential bad guys. With their flags and cinematic obsessions and even their knife-wielding beheadings, they are not just bad guys, but cartoonishly so.

Tonight on PBS, Frontline is premiering the hourlong “Escaping ISIS,” an investigation into the thousands of Yazidi women enslaved by ISIS near the Iraq/Turkey border. ISIS believes both that the sexual maturity of women is at the age of 9 and that the Yazidi are heretic pagans. The result of these twinned beliefs is systematic rape in the form of sex slavery of the women of an entire subculture. It’s a story that has until now gone mostly unreported in the press, which has focused on the political implications of ISIS occupation of sections of Iraq and Syria and the white hostages that have been barbarically executed on-screen. For all that ISIS has dominated the news, we have seen very little of what life under ISIS is like; little understanding of what they are besides a force that needs to be defeated.

“Escaping ISIS” is a narrative of the organization that contains no dramatics, no explosions, no enthusiastic ISIS propaganda, and no social-media-savvy teenagers promoting their way of life with hashtags and animated gifs. It’s instead the harrowing story of a man trying to find his family—of refugees trying to track down lost loved ones. And as the women trickle back across the border, they tell unimaginable stories of abuse—the repeated rape of one 9-year-old girl by a captor; the gang-rape of a mother of two that lasts all night and into the next day; relatives that can only be brought back to their families if they are bought from the captors who are selling them as sex slaves. A female journalist records, secretly, how she is accosted at a traffic stop for not wearing the appropriate attire; undercover footage depicts ISIS recruits, largely composed of young men, from all over the world, trading jokes about how many sex slaves they will have when they rule the world. It is the under-the-skin exposé of ISIS, the story as it unfolds on a small scale, out of the way of international attention and 24-hour news.

Without this piece of the story, there is something burning and glorious about ISIS—a collection of lost boys camping out in the rugged desert, building a kingdom out of nothing. Even Western journalism’s careful reportage on how the militant group is stubbornly retreating to a seventh century medieval form of punishment makes the organization sound like confused Ren-faire rejects. But where ISIS consciously evokes Hollywood—there’s a propaganda clip from “Escaping ISIS” that features a squadron of burqa-clad women soldiers wielding machine guns, which feels like a hallucination from an M.I.A. music video—Frontline’s documentary reminds the viewer that there’s more to filmmaking than just explosions and car chases. There is also the pain in a woman’s eyes as she suffers her fifth panic attack of the day, haunted by her own memories.