Scott Walker makes Mitt Romney look like FDR: The Kohl's shopper is even more callous toward the poor

Calling the minimum wage a “lame idea,” Walker and the 2016 GOP field position themselves well to Romney's right 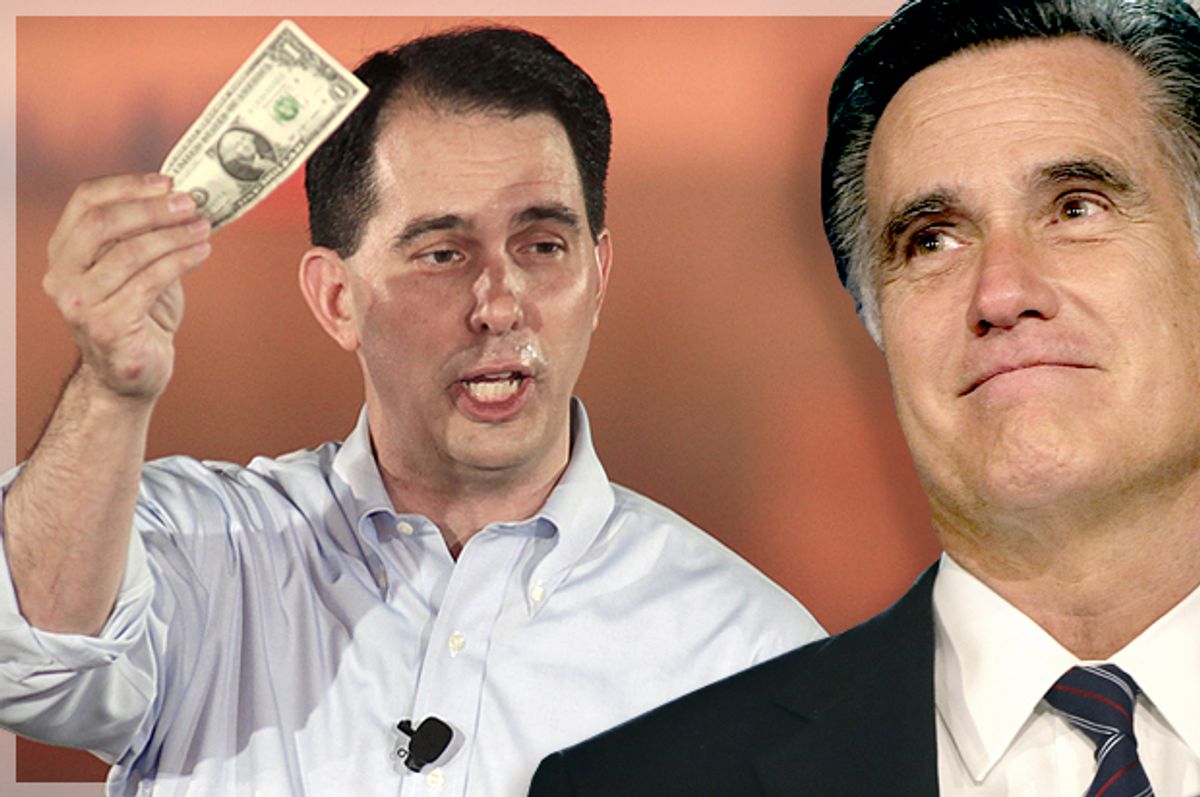 Wisconsin Gov. Scott Walker thinks his humble background gives him working class appeal. But we know the man who shops at Kohl's is wholly owned by the Kochs. But if he wasn’t born a plutocrat, he’s a zealous convert to the cause.

His first shot out of the gate Monday night, after his relatively successful campaign launch, was to attack the minimum wage on his friend Sean Hannity’s show. Here’s what he said:

The left claims that they're for American workers and they've just got just really lame ideas — things like the minimum wage. Instead of focusing on that, we need to talk about how we get people the skills and the education and the qualifications that they need to take on the careers that pay far more than the minimum wage.

Now, this is on the verge of becoming GOP boilerplate: We don’t care about the minimum wage because we want you to make far more than the stinkin’ minimum wage. New Jersey Gov. Chris Christie laid it out in blustery remarks to the U.S. Chamber of Commerce last October.

I gotta tell you the truth, I'm tired of hearing about the minimum wage, I really am. I don't think there's a mother or father sitting around a kitchen table tonight in America who are saying, 'You know honey, if my son or daughter could just make a higher minimum wage, my God, all our dreams would be realized.’ Is that what parents aspire to for their children?

I’m sure there are parents who wish their kids making minimum wage earned a higher wage. There are also parents themselves who make the minimum wage living with their children in poverty; in fact, 28 percent of minimum wage workers have kids.

But we’re used to Republicans ignoring facts when bloviating about the economy. What’s really become remarkable, in the last few weeks, is how quickly the 2016 GOP field has moved to the right of Mitt Romney. Romney is on record supporting an increase in the minimum wage, by the way; all of the 2016 hopefuls so far have come out against a wage hike. Last week, we watched Jeb Bush commit his own version of the “47 percent” self-sabotage (in remarks he knew were public, no less) when he said American workers need to “work longer hours.” Really, when it comes to economic policy, Bush and Walker are making Romney look like FDR.

Of course, it’s immigration that shows the 2016 wannabes won’t learn from Romney’s loss. The 2012 nominee has said his “biggest mistake” was his harsh policy stance on immigration, promoting “self-deportation” for those here illegally.

"I think we have a real difficulty in the party, and myself included, communicating to Hispanic voters and minority voters generally why it is that conservative principles are better for them and their families than those that are being promoted by the liberals, by the Democrats," he told Yahoo's Katie Couric in March. "That's something I didn't do very effectively," he said, calling it "without question the biggest mistake that I made in the campaign."

This time around, Donald Trump is setting the tone with his awful remarks calling Mexican immigrants “criminals” and “rapists.” The other candidates took their time denouncing Trump, while Ted Cruz praised him.

Astonishingly, ABC’s David Muir had to ask Walker three times to get him to respond to Trump’s hateful remarks Monday night. He finally cornered him by asking what he’d say if Trump repeated his remark on a GOP debate stage. The wishy-washy Walker said he’d “respectfully disagree” with Trump. He was even more cowardly with Hannity, insisting Trump "can speak for himself" Monday night.

Of course Walker has flip-flopped on immigration, once supporting a pathway to citizenship but now calling to reduce even legal immigration, as does Rick Santorum. This is what counts as a policy pitch to white working class voters: Don’t come up with plans to increase their wages, just pit them against immigrants and pander to their xenophobia. But those two guys can’t compete with Trump in firing up the nativist ire of white working class men.

Still, conservatives remain convinced Walker is their best hope at combining right-wing red meat politics with electability. Rush Limbaugh all but endorsed him after his campaign launch Monday:

Scott Walker has a track record. Scott Walker doesn't have to tell you what he will do if he's elected because all he has to do is point to what he has done….He has implemented a conservative agenda against everything the Democrat party has to throw at him. And he's beat them three different times, which, we've heralded it here quite often and talked about it quite often. So he's--he's the one guy in the race with a conservative track record, the one guy in the race who has shown how to defeat the media and Democrat coordinated attacks on conservatives. He's shown how to hang in and be tough. And so he's the one guy that has something other than promises, to me.

I remain convinced that Walker’s path to the White House is blocked by his problems with women and black and Latino voters. Simon Maloy lays out more here. Walker thinks he can win by running up the GOP’s edge with white working class men. But maybe his dismissing the minimum wage as “lame” will help even those voters see that he’s serving the Kochs, even as he shops at Kohl's.