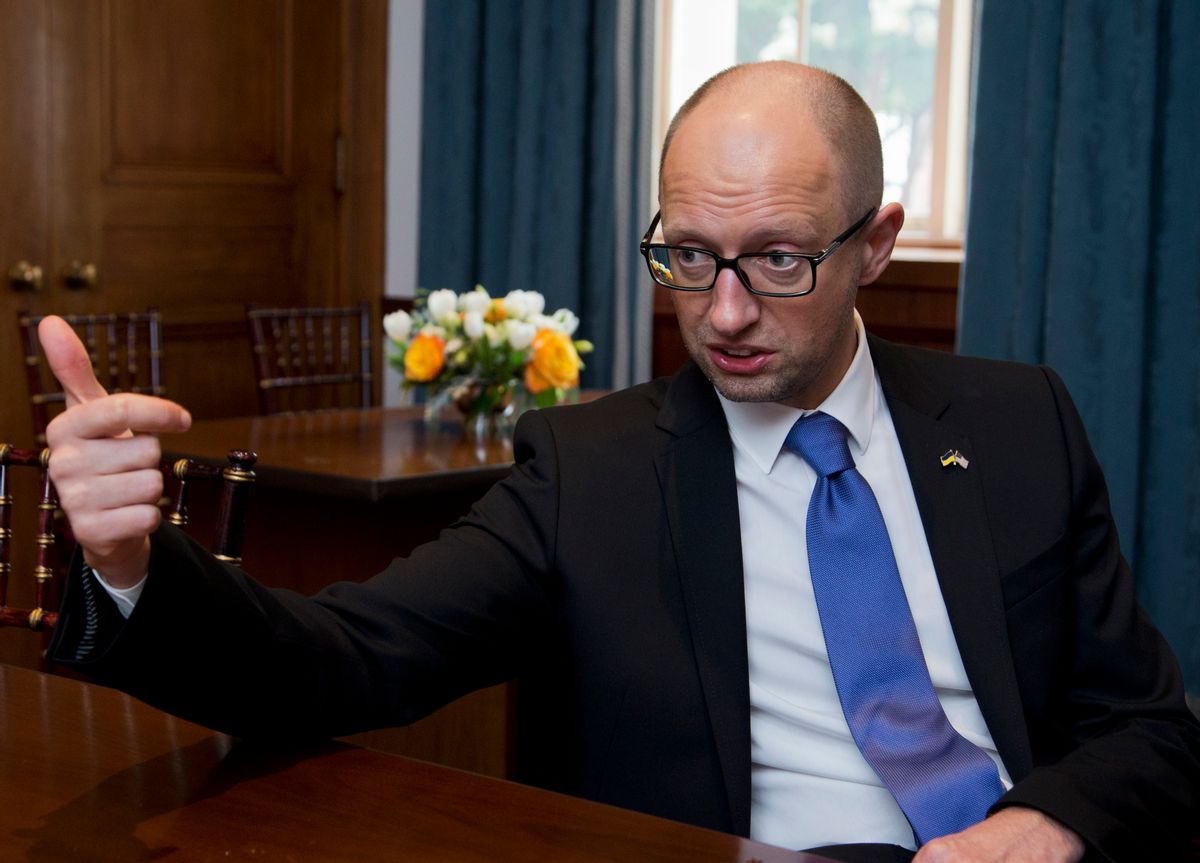 WASHINGTON (AP) — Ukraine's prime minister pushed back Monday against a pair of forces threatening to undermine his fragile government, likening members of Ukraine's parliament to "lunatics" while defending a nationalist militia that is locked in a standoff with police.

Prime Minister Arseniy Yatsenyuk, in Washington for meetings with top American officials, also welcomed an announcement that the U.S. military is considering a plan to train Ukrainian army soldiers. He suggested he was optimistic the U.S. would also start sending weapons that Ukraine says it needs to defend itself against Russian aggression.

Yatsenyuk's U.S. visit came amid growing global concerns over proposed legislation in Ukraine's parliament that would water down economic reforms demanded by the international community. A day earlier, the International Monetary Fund insisted that Ukraine must "stay the course," suggesting that rolling back the reforms could jeopardize the IMF's $40 billion support package for Ukraine.

Yatsenyuk, in an interview, predicted none of those controversial bills would reach the floor of the parliament. If they do, he insisted, Ukrainian President Petro Poroshenko will veto them.

"In every parliament, you have populists. Sometimes they look like lunatics," Yatsenyuk told The Associated Press. "This government and this president are determined and committed to our reform agenda."

At the White House, President Barack Obama echoed the need for Ukraine to stick with austerity measures during a meeting Monday with Yatsenyuk and Vice President Joe Biden. The White House said Obama and Biden welcomed Ukraine's "strong stand against populist measures that could undermine Ukraine's financial stability."

"The pressure is on the parliament to keep moving forward and to not slip backward," U.S. Commerce Secretary Penny Pritzker said in an interview on the sidelines of a U.S.-Ukraine business forum. "These are hard choices. The prime minister feels the pressure. But as long as they're moving forward, they're not alone."

As Yatsenyuk pushed for more U.S. investment, security forces in western Ukraine were locked in conflict with the nationalist Right Sector militia, which has accused local police of smuggling contraband across the border with Poland, Hungary and Slovakia. On Saturday, the group launched a deadly gun-and-grenade attack on police, sparking an ongiong standoff, and on Monday the group briefly took a 6-year-old boy hostage.

But the prime minister, in his remarks to the AP, appeared to validate the group's accusations against police.

"It wasn't about the Right Sector. This is about corruption and smuggling and arms on the street," Yatsenyuk said. "They supported smugglers and contraband, and everyone will be brought to justice for the crimes that have been committed."

Staunch supporters of Ukraine's sovereignty, the Right Sector played a key role in last year's massive protests in Kiev and have fought on the government's side since war broke out in eastern Ukraine with pro-Russian separatists. Although the group has little formal involvement in Ukrainian politics, Russia has accused Ukraine's government of going too soft on the Right Sector, calling it evidence of Kiev's fascist leanings.

The Obama administration and Western allies have struggled to find ways to strengthen Ukraine following Russia's annexation of Crimea last year and fighting in eastern Ukraine that the U.S. accuses Russia of fomenting. Obama has repeatedly conceded that tough economic sanctions imposed by the West have done little to change Russian President Vladimir Putin's decisions about Ukraine.

"The fact of the matter is Ukraine is now under siege. Russia is building military outposts on Ukrainian soil," Biden told the U.S.-Ukraine business forum.

In a modest step Monday, the top U.S. commander in Europe said the U.S. was considering expanding its training program — currently limited to Ukraine's Interior Ministry forces — to include troops from Ukraine's army. Yet that announcement, while welcomed by Ukraine, fell short of a promise of weaponry that Ukraine has long been seeking. The U.S. has provided nonlethal aid to Ukraine, but so far has stopped short of any offensive weapons.

"We expect to get additional support from the United States," Yatsenyuk said. "We do understand that some NATO allies are a little bit reluctant in the decision to supply defensive weapons to Ukraine. But this is not just about Ukraine. This is about the security of the world."