Who's speaking up for the shrinking middle class? Not who you'd expect

Presidential candidates weigh in, of course, but now the Pope pledges to defend what a liberal columnist shrugs off 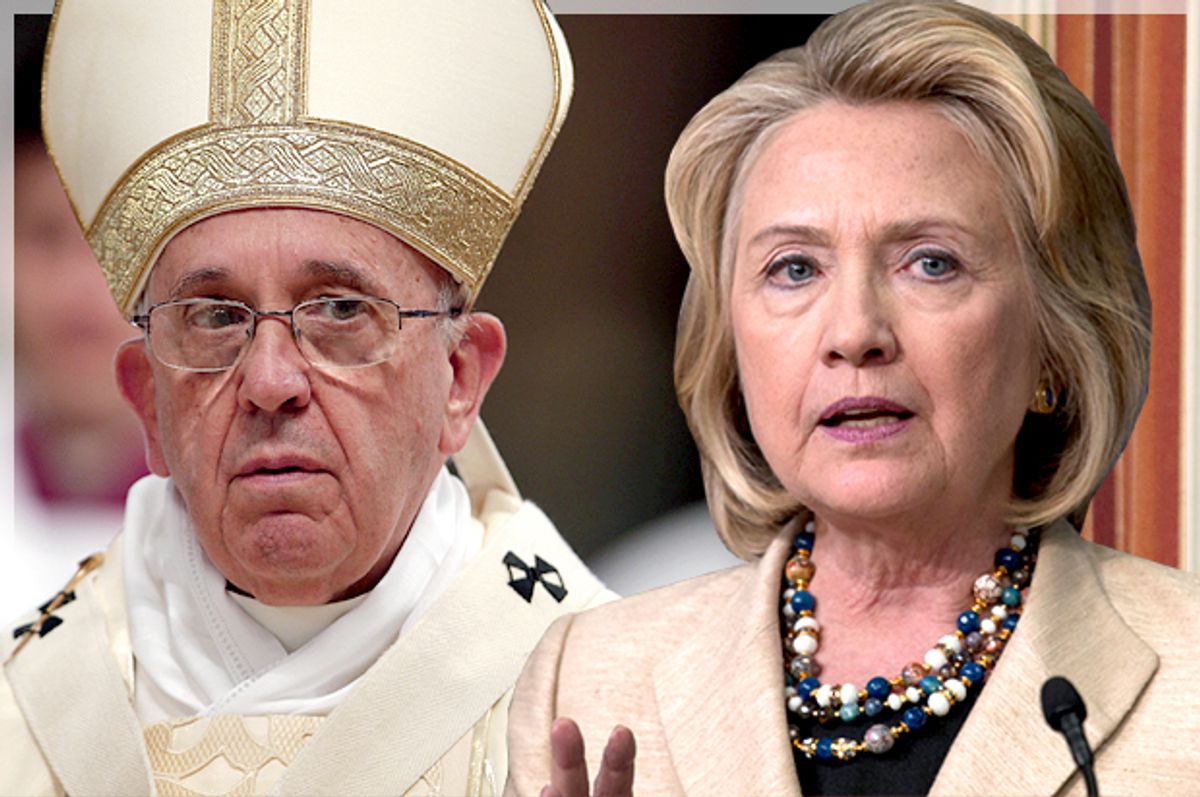 Over the last few days we’ve gotten more news about the embattled American middle class, which even Ted Cruz has spoken about. His rival for the 2016 presidential election Hillary Clinton just gave a speech appealing to a middle beaten down by wage stagnation and the gig economy. It came the day after an important New York Times story, “Growth in the ‘Gig Economy’ Fuels Work Force Anxieties.”

The decline of traditional salaried jobs and the rise of temping, freelancing and whatever Uber is has led to serious middle-class instability, the story argues:

Along with other changes, like declining unionization and advancing globalization, the increasingly arm’s-length nature of employment helps explain why incomes have stagnated and why most Americans remain deeply anxious about their economic prospects six years after the Great Recession ended… The number for the category of jobs mostly performed by part-time freelancers or part-time independent contractors, according to Economic Modeling Specialists Intl., a labor market analytics firm, grew to 32 million from just over 20 million between 2001 and 2014, rising to almost 18 percent of all jobs.

And here’s the funny part: Most of us agree we’ve got a crisis, but the people backing up the middle class these days are not the ones you’d expect. That is, Pope Francis — the leader of a church with, despite a record of social conscience, little historical commitment to the burghers — says he’s got to pay more attention to their plight. And an important columnist — from the side of the political aisle that tends to make noise in this direction — dismisses the let’s-help-the-middle argument as somewhere between silly and impossible.

First, the Pope, who has spoken about the ravages of globalized capitalism and the struggles of the poor, but not much about the middle. When questioned by a German journalist during a flight to Rome, Francis conceded that he needed to attend more to the subject. He also offered this, from the New York Times coverage of the trip:

“Then, on the middle class, there are some words that I’ve said — but a little in passing,” he said, musing. “But talking about the common people, the simple people, the workers, that is a great value, no? But I think you’re telling me about something I need to do. I need to delve further into this.”

We’ve seen humility and political commitment from this pope; here’s to him sticking to his promise.

And what does one of our most storied liberal columnists offer? In the words of Michael Kinsley’s Vanity Fair headline, “Forget About the Middle Class.” Kinsley, of course, is a longtime contrarian, and you can expect him to go against the grain when subjects become fashionable. But it’s still a bit odd to have him argue this way in his latest story:

Problem Number One with the emphasis on the middle class is simple: What about the poor? Most of us have no trouble with taking a little bit more—even a big bit more—from the rich to give to the poor. I certainly have none. Taking from the rich to give to the middle class is something else again. The term “middle class,” if it means anything at all, must mean there are people below the middle who qualify as “lower-class.” What justification is there for concerning yourself with the middle and ignoring the people at the bottom?

He also argues that “there aren’t enough rich people to provide windfalls of extra cash” for the middle. Is Kinsley right? Well, he makes good points about the relatively small amount of resources we’d get by robbing the rich.

But given that the middle-class slump is real, and likely accelerating with the dominance of the one percent, it might be more useful to remember that we had a more robust middle-class society for the three decades after World War II, and several other democracies still do. If you care about the stability and security of the middle – which is what typically anchors a society and allows a democracy to flourish -- you’re not just talking about raw redistribution, but things like college costs and public schools and spending on infrastructure, and middle-class jobs that don’t get Uber-ized.

Contrarianism can be fun, but it doesn’t really get us anywhere. Sometimes, maybe, old-fashioned papal moralism takes us further along.