Who'd have thought Pat Robertson's ideas about sex and relationships are totally backward. Oh right, everyone 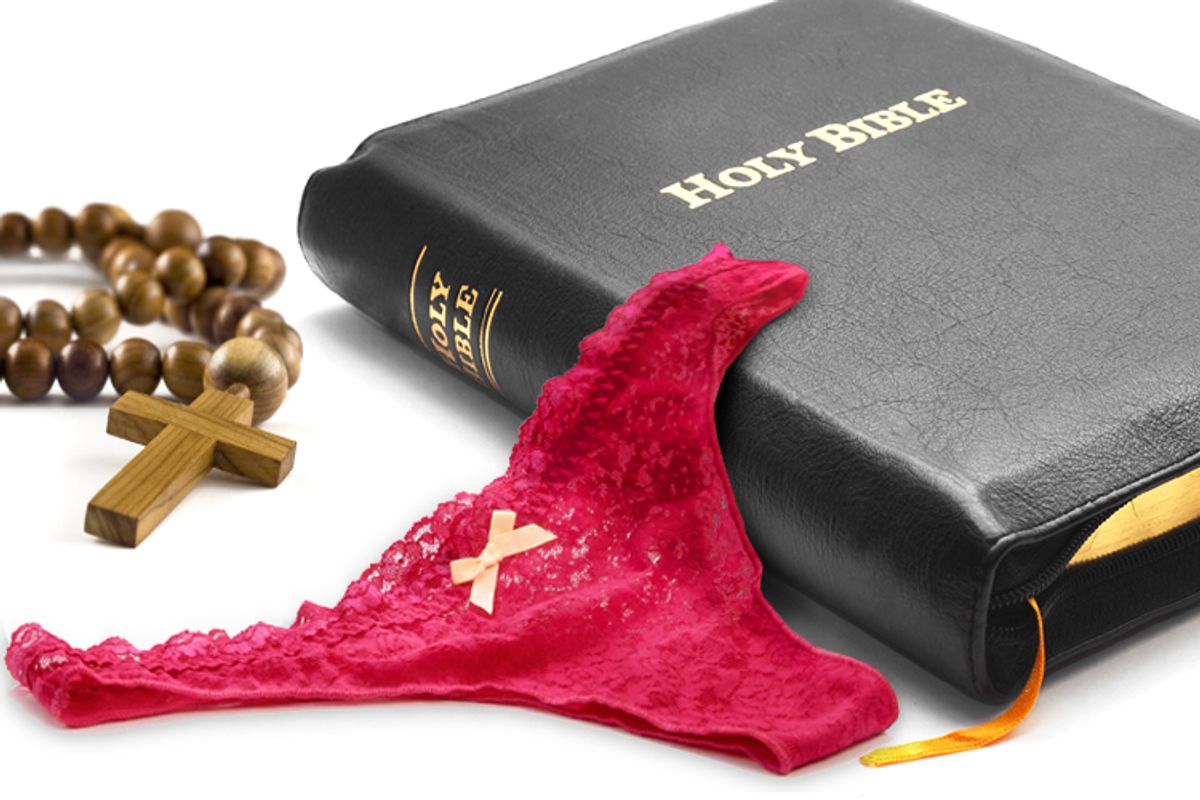 We may have survived yet another war on Christmas. But we must remain vigilant. For the very same secularist, Muslim, homosexualist, communist, atheist freedom-haters who try to take the Christ out of Christmas (and put the melanin into Santa and Jesus) are attacking the very nexus of our entire 2,000-year-old (give or take) Earth: the relationship between man and wife. But have no fear. Below are some handy and holy tips on love, relationships, dating and marriage, which allow you to please yourself (not that way), your mate and your Lord.

1. Girls: Shut up. Justin Lookadoo (how sexy is that name!) is a faith-based dating coach, motivational speaker and former juvenile probation officer (killer combo). His books include "Dateable: Are You? Are They?," "The Dateable Rules" and "The Dirt on Sex." Lookadoo's website offers the following  gems:

3. Share an eating disorder. The Christian Broadcast Network has some (101, to be exact) ideas for " Creative Dates." A few of my favorites are nutrition-related: “Make up a fun diet together,” or “Eat creatively one whole day for $1.18.”

4. Engage in strange, antisocial and alienating behavior. Among the CBN's date ideas are, why not "Kidnap a friend for breakfast ... visit the library and ask the librarian a bizarre question ... develop a new laugh together ... survey the neighborhood with a self-made, bizarre questionnaire ... go to the airport and watch people ... run your own neighborhood day camp for one day."

5. Pretend to be senior citizens. The 101 dating tips above are so fun you'll probably run through them in no time. But don't despair. Focus on the Family has even more great suggestions, including, “Date like you're from the generation older or younger than you actually are. Eat ice cream cones and rollerblade in the park for a date fit for teenagers. If you prefer senior-style fun, eat applesauce, play bingo and watch a black-and-white movie.” While you’re at it, rock some Depends underwear, blast Fox News, and complain about having to keep up with the latest terms for black people.

6. Transcribe the Bible together. If you want to bring religion directly into your date, try out the following Focus on the Family  idea: "Find a flat piece of scrap wood and use a permanent marker to write out your favorite Bible verses. Take it to a nearby beach, river or lake and toss it in the water. This may be of great encouragement to whoever finds it later on." Fun for you, fun for your date, and totally creepy for the random person who finds it! What’s not to like?

7. Wives: Keep the devil out by submitting. Karen Blake, the author of  "Do You Hear the Battle Cry? An Essential Handbook for the Wives of Christian Men," has  a lot to say about marriage. The bad news is that, "Satan is out to kill your marriage and destroy your ministry." (But we already knew that.) The good news is that "God has given you the tools to defeat him." One of the best Satan-defeating tools is submission: "The devil has worked for centuries to set up a world system that says a strong woman must never submit to a man. It says, "Submission means getting walked on." God clearly commands, "Wives, be subject—be submissive and adapt yourselves—to your own husbands" (Eph. 5:22, Amplified)." As usual, Michele Bachmann is right.

8. Put out so your husband behaves. In her Christian.com-published book  "No More Headaches: Enjoying Sex & Intimacy in Marriage," Julianna Slattery offers some great tips on how women can help their helpless husbands resist temptation. Take the story of Sheila and Mark:

“While Sheila seemed content to put their sexual relationship on hold for the time being, Mark responded by initiating more frequently. If he was a deer panting for water, she was a camel who seemed capable of walking through the desert for months at a time without a water break. [powerful imagery!]

Like Mark, your husband depends on you to be his partner in his battle against sexual temptation.... you are a key component in his victory. You're the only woman in the world whom your husband can look at sexually without compromising his integrity!”

9. Dump your Muslim girlfriend. Pat Robertson has much good advice for relationships. A Christian (duh) viewer of Pat Robertson's 700 Club asked the holy host if he should marry his Muslim girlfriend of three years.  Pat's answer: “No way.... She wants to do her Muslim thing....Walk away.” Worried that walking out on a girlfriend isn’t the Christian thing to do? Don’t worry. It totally is. Robertson explains, Christ is “not gentle Jesus, meek and mild, he really isn’t.” Like so many men, Jesus Christ is merely misunderstood.

10. Stay married to your husband who sexually abuses your kids. In her surprisingly not very forward-thinking book,  "Created to Be His Help Meet: Discover How God Can Make Your Marriage Glorious," Debi Pearl literally  tells women to stay with their abusive husbands:

“But if your husband has sexually molested the children, you should approach him with it. If he is truly repentant (not just exposed) and is willing to seek counseling, you may feel comfortable giving him an opportunity to prove himself…. Stick by him, but testify against him in court. Have him do about 10 to 20 years, and by the time he gets out, you will have raised the kids, and you can be waiting for him with open arms of forgiveness and restitution. Will this glorify God? Forever. You ask, “What if he doesn’t repent even then?” Then you will be rewarded in heaven equal to the martyrs, and God will have something to rub in the Devil’s face. God hates divorce — always, forever, regardless, without exception.”