"There has to be a change in policing": The unfinished business of criminal justice reform 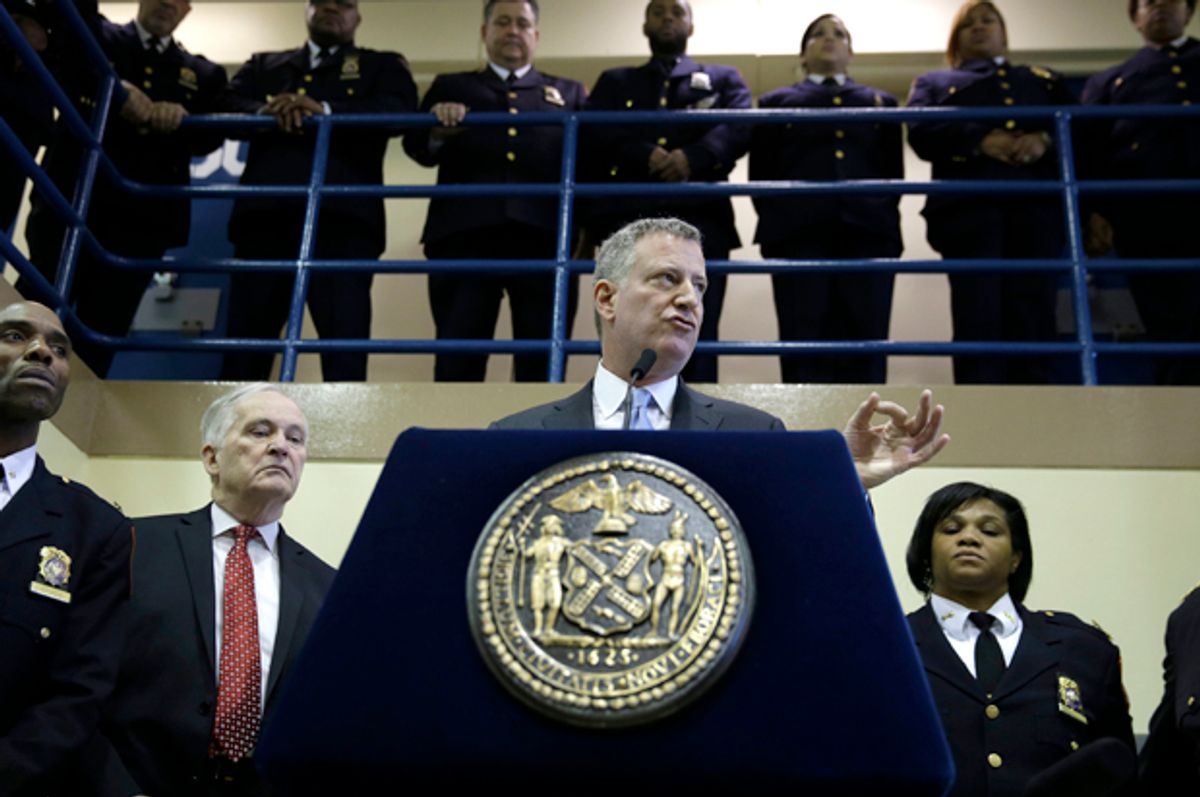 The criminal justice reform movement is having a good month. Most recently, reformers got to hear President Obama deliver a long and serious (and imperfect) speech about the need to reduce mass incarceration. But as valuable as it is to have the most famous person in the world touting your cause, the real point of the movement is not just to change minds but also laws.

And that's why reforms announced this month by New York Gov. Andrew Cuomo and New York City Mayor Bill de Blasio may be even more significant than the president's address. The first change unveiled was Cuomo's, who announced that he was issuing an executive order to appoint a special prosecutor for so-called police involved killings. The second, which came a day later, was from the City of New York, which announced that it was changing bail requirements for low-level offenders, with reducing the population of Rikers Island as a main goal.

Interested in hearing the perspective of those who have long advocated for reforms such as these, Salon decided recently to call up Donna Lieberman, the executive director of the New York Civil Liberties Union, and get her take. In addition to discussing the reforms out of New York, we also touched on "broken windows," body-cameras, and other ways to improve relations between law enforcement and the citizens they're sworn to protect. Our conversation is below and has been edited for clarity and length.

What is your assessment of the executive order the governor signed?

I think that the appointment of the Attorney General as the special prosecutor is a victory. It's a huge victory for justice. It's a tribute to the moms and wives of the young men who have been killed by the NYPD. Unfortunately, it's not the answer to all of our societal problems with policing and the racial divide in our country. It is a giant step towards the healing and the accountability that is absolutely essential to that healing process.

Why is it a necessary move to heal the rift in the community?

There is an inherent conflict of interest between the DAs and the public when it comes to prosecuting for wrongdoing, because DAs rely on the cooperation and support of the police department to do their jobs as DAs, everyday. While I have no doubt that there are some DAs who could and would, and do, do it right, there is the built in basis for distrust, mistrust and tipping the scales. Bending over backwards, as we saw in the Eric Garner. That is bad for us as a society that is looking for justice. Not scapegoats, but justice.

There is another aspect to all this, which has to be mentioned, which is the current lack of transparency with regards to grand jury proceedings and the appointment of the special prosecutor, and it's right that it sits with the state attorney general. There remains a lack of transparency in New York with regards to what happens in the grand jury room.

Why is that troubling? Isn't that by design?

There may be, and there are, undoubtedly, some legitimate aspects of what goes on that should be withheld from the public. But the situation we have right now, where it's really entirely a proceeding that goes on behind closed doors, without meaningful opportunities for public scrutiny, is tailor-made for suspicion and distrust. That's an unresolved issue here. It's a matter that will likely reemerge, and it's important that we come up with a nuanced way to end the regime of secrecy that allows grand jury proceedings to happen behind closed doors.

I used to practice criminal defense, and we were fond of saying — or sarcastically fond of saying — that the DA could indict a ham sandwich, meaning that the DA is able to manipulate the grand jury, because there's nobody else in the room. Nobody gets to watch what they're doing. Any proceeding, whether it's the DA or the attorney general running it, is subject to that criticism.

Is that the element of the system that needs to be addressed most immediately? How significant is it that is this an executive order rather than legislation?

I want to be positive but, of course, an executive order is only as good as the executive behind it; and it's only as lasting as [the] executive behind it. This reform should not be subject to the vagaries of the political system. There should a permanent structural reform. It is unfortunate that our state legislature could not come to an agreement about that, and send a bill to the governor to make into law. That's important. But there are also other reforms that are quite necessary to rebuild the crisis of confidence.

Here in New York, we have also been pressing hard for greater transparency about policing practices. We don't know, for example, how "broken windows" policing plays out. We don't know how many people receives summons for what, and the race and ethnicity and disposition of those summoned, for, say, marijuana.

There has to be a change in policing, from the militarization and the almost occupying-force character of this hyper-zealous broken window policing, to policing that is mandated from the top, deep in the culture of policing department, to treat all people with respect, and to go about their job with the mission of protecting everybody. Not the attitude of, "Who can I grab off the street because they might be a bad guy?"

I'm not in the habit of often citing Rudy Giuliani, but his tagline, "Courtesy, professionalism and respect," actually is pretty good — if only he had meant it. A mandate for deescalation, rather than to nail anybody you possibly can for anything, whether you have a case or not, really has to become the order of the day. It's a hard transition to do. For decades, our police have been instructed in a different manner. The attitude, the approach, and the mandates that apply in wealthier communities have to apply in communities of color and to people of color.

Here in New York City, we've been advocating, for a couple of years now, for the Right to Know Act. There are two bills which were part of a four bills package, two of which got passed — the Racial Profiling Bill and the Special Prosecuting Bill, just before the last mayoral election One of the two remaining bills would require police officers, prior to a consensual search — not a search based on suspicion — to let people know you have the right not be searched. It's a kind of Miranda warning for searches.

The other bill would require police officers — like the professionals they are, or should be — to identify themselves when they interact with the public, and give out their cards, so that people know who they are and are not intimidated from asking who they are. One constant source of conflict between the police and the public is that when something is going wrong, and people say, "What's your badge number?" some [police] have covered their badge numbers.

What about body-cameras? That seems to be one of the more popular reforms.

We're all learning that body-cameras can provide a lot of transparency and accountability, but also raise huge concerns about what you record, when, and the notions of privacy, even though it's typically out in the public. I think that, in the end, cameras can be very helpful in trying to reduce abuse, and ensure accountability. But as we saw with Eric Garner, that too is not a solution. We didn't have a body camera, but we had a video. Millions of people watched in horror as he pleaded, "I can't breathe, I can't breathe." But what was a horrific act of homicide in the eyes of so many of us, was not seen that way by some people. Sadly, it breaks down by race.

Before I let you go, I wanted to ask you about New York's bail reform. It was widely celebrated, but some people have noted that the system devised to replace bail has problems, too. Are you concerned that the new model might be less financially punitive but still burden people who have not been proven guilty with surveillance and check-ins and so forth?

I think that is a completely legitimate concern. We — and more important than the NYCLU, the public defense organizations who are in court day in, day out — will have to be monitoring this program very, very carefully. But it's encouraging that this comes from the place of wanting to reduce the population at Rikers, wanting to make sure that people who are charged with low-level offenses and non-violent offenses are not subjected to punishment simply because they're too poor to make bail. The motivation is the right one.

When you think about what happened to Kalief Browder — the fact that he languished in jail and in solitary confinement, without ever really being convicted of anything; and he was sixteen when it happened — we have to hold onto our concerns but welcome this step in the right direction. We have to do everything that we can to make it work. Two hundred fewer people at Rikers is two hundred lives potentially saved, or at least not hurt in [a] perhaps irreparable way.