This downsized, misshapen blend of action-cartoon and indie spoof has no reason to exist, but it's still a hoot 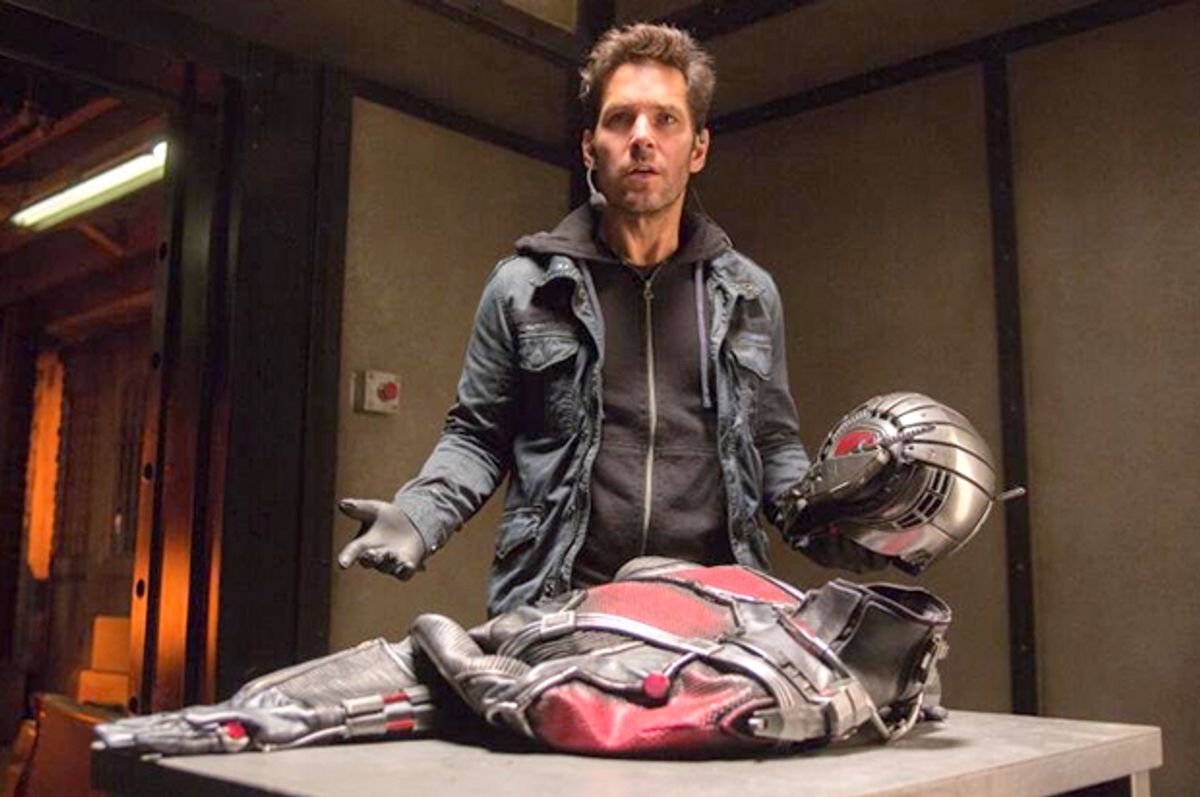 So here comes "Ant-Man," a jumbled afterthought of the Marvel Comics universe that will make a ton of money just because. Oh, why be mean? Because it's the middle of summer and kids are out of school and in its medium-stupid and mismanaged fashion it's not so awful. Ant-Man is a character other silly people in the Marvel universe make fun of -- was that hurtful? I'm so sorry -- and this movie cannot quite decide what it wants to be, in the unlikely event that it grows up.

Until recently "Ant-Man" was going to be a self-referential spoof directed by Edgar Wright of "Shaun of the Dead" fame, and some of that DNA is still in there. Wright and "Attack the Block" director Joe Cornish are among the four credited writers, but at some point star Paul Rudd and "Anchorman" director Adam McKay got in on the action too. Rudd plays Scott Lang, the cheerful lowlife who is transformed into Ant-Man by the power of Michael Douglas' shellacked hair and Clinton administration eyewear. Anyway, the movie was directed in the end by a person called Peyton Reed, one of those longtime Hollywood comedy people who isn't good enough to be memorable or bad enough to be mockable. It largely resembles -- no, largely is an elaborate CGI action cartoon with giant ants (mostly friendly) and a giant Thomas the Tank Engine (super scary!), bookended by a pleasant but inconsequential Paul Rudd indie comedy that cost $75 million or whatever it was.

Michael Peña should probably sue everyone in Hollywood for making him play a stereotypical Latino gangbanger, although the character is admittedly really funny and has a taste for white wine and modern art, and Peña is one of those actors who's always fun in anything. Judy Greer, another always-fun actor, should definitely sue everyone in Hollywood for yet another role in which she stands around looking chipper and gets nothing to do. But they both seem like nice people and anyway they cashed the checks, so they won't be doing that.

Partway through its "Honey, I Shrunk the Burglar" plotline, "Ant-Man" turns into yet another cinematic riff on the mind-altering, reality-shifting visual journey pioneered by Stanley Kubrick in "2001: A Space Odyssey." No, see, you think I'm still being facetious but I'm totally not. Reed attempts, after his own antlike fashion, to follow in the tripped-out footsteps of Christopher Nolan's "Interstellar," Gaspar Noé's "Enter the Void" and Luc Besson's "Lucy," just to name a super-mixed bag of examples. After he goes down a bathtub drain and gets sucked into a vacuum bag and surfs the grooves of an LP on a DJ's turntable and evades the platform shoes of hot young disco dancers, Rudd's micro-hero gets so tiny he enters the realm of quantum physics, where the laws of space and time no longer apply and your personal identity vanishes into kaleidoscopic triangles floating through a loaf of moldy bread. Is it the ultimate nature of reality, or the inside of Donald Trump's brain?

Breathe, Ant-Man! Drink some water. You took a powerful drug, or to put it another way you are a character in a discombobulated summer movie that's kind of fun but doesn't have nearly enough story to fill up two hours. God is here, looking disconcertingly like Michael Douglas, and he loves you in his special sourpuss way. It will all be over soon, after about eight seconds of rushed denouement. Then we get one post-credits stinger scene alluding to the endless future of yet more Marvel movies -- and then we get another one (which I didn't understand at all). And then we all get to go home, only a little smaller than we were before.