The billionaire blowhard seems like a joke, but his racist invective is magnifying dangerous right-wing resentments 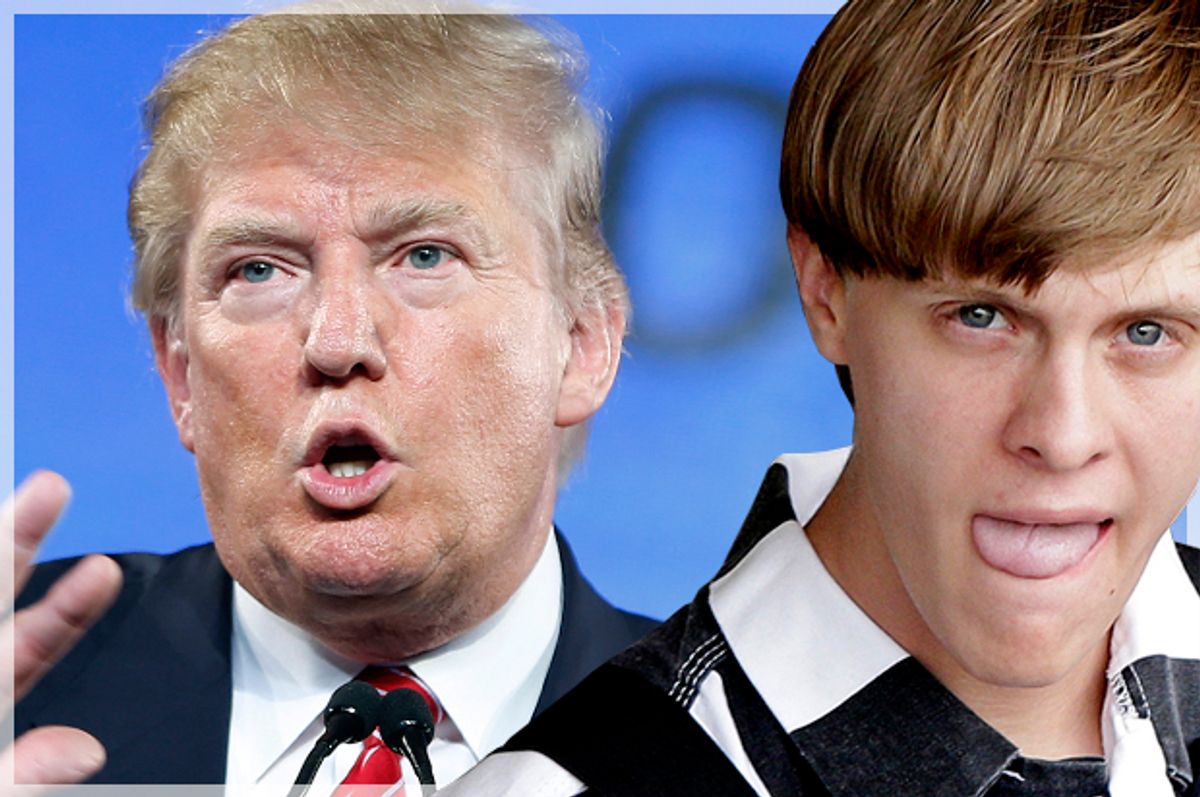 Right-wing domestic terrorist Dylann Roof killed nine African-Americans in a Charleston church because he felt that “his country” was being “stolen” from him by African-Americans and other people of color. Republican Presidential candidate and reality TV show star Donald Trump believes that “illegal” immigrants from Mexico are predators who are stealing jobs and resources from America while they rape and murder white women. Dylann Roof is an overt and unapologetic white supremacist terrorist. Donald Trump is a “belligerent, loudmouthed racist.” He is also a leading 2016 Republican presidential candidate.

The overt white supremacist websites that taught Dylann Roof his racist beliefs, and the more “polite” and “respectable” right-wing media outlets such as Fox News, are part of the same political communication ecosystem. Both Dylann Roof and Donald Trump are channeling the racist political values and talking points that are generated on a daily basis by Fox News and the right-wing propaganda machine. There, ideas circulate back and forth between the “mainstream” media and its peers within the white supremacist political community. Talking points are refined and developed; the issue or controversy of the day is circulated; trolls (often hired by right-leaning public relations firms) are deployed to online comment sections in an effort to create the illusion of consensus on the part of the “silent majority” and “real Americans” on any given issue -- all while silencing dissent and harassing those people they do not agree with.

Experts in political communication and media have described the denseness of ties, shared links, and the alternate reality created in the right-wing media(both traditional and digital) as exhibiting a condition of “epistemic closure.” What that means is this: Because contemporary conservatism has created a bizarre and twisted reality for those who consume its news media and other information sources, a state of extreme political polarization has been created. If citizens cannot come to agreement about basic facts, they are crippled in their ability to solve common problems of shared public concern. This crisis is made even more acute by how recent research has demonstrated that those people who listen to Fox News and other right-wing media outlets are more likely to hold erroneous beliefs about the nature of political and social reality. In essence, Fox News is not “news”—it functions as an organized disinformation campaign that propagandizes its followers into accepting right-wing lies and distortions as empirical fact.

The “conspiranoid” fantasies of your crazy uncle or well-intentioned but profoundly ignorant grandmother -- who repeatedly forward you emails claiming that Obama was born in another country; or that the United States’ first black president hates white people; or about how the Democrats will create death panels to kill the elderly; that “White America” is a victim of “racism” by black and brown people; or that the United States military is planning to invade Texas -- are not born of the ether. They are a product of an echo chamber, a product that is designed to derail, distract, and delegitimate the government.

In "The Paranoid Style in American Politics," historian Richard Hofstader famously wrote about the dangers posed by such an impenetrable bubble. Hofstadter's essay was published during the 1950s, at the conclusion of McCarthy's witch hunt, at the dawn of an ideological revolution that would manifest, in the short term, in movements such as the John Birch Society, and culminate decades later in the presidency of Ronald Reagan. Now, in the age of Obama, this paranoid style has been mainstreamed and amplified by the 24/7 cable news cycle, the power of instantaneous communication offered by digital media, and a weak fourth estate that treats all ideas—however absurd, without empirical merit, or unmoored from reality—as “facts” to be debated and discussed.

White racial resentment, white victimology, white identity politics, and white grievance-mongering are common to overt white supremacists such as the Ku Klux Klan, Neo Nazis, and white nationalists, more broadly. The same values are mobilized by the Republican Party and Fox News media through symbolic racism, the use of coded racial appeals, and the now-infamous "Southern Strategy." Overt white supremacists largely traffic in “old fashioned” racism; the contemporary Republican Party uses “colorblind” racism and claims about “bad culture” or “cultural pathologies” among blacks to legitimate and protect a system of white privilege and supremacy.

However, the divide between the old-fashioned racism of White Nationalists and the “modern” racism of the contemporary Republican Party is not fixed. White racial animus towards blacks and Latinos (and often other people of color) grows from the same soil: a belief that the United States is naturally a “white” country and that White America has a Herrenvolk birthright to its resources and opportunities before all other groups of people. Whether explicitly invoked or done through coded appeals, these shared beliefs help to make the cross-pollination of ideas within the right-wing echo chamber so efficient.

There are many examples of a convergence between the narratives generated by overt white supremacists and those of the “mainstream” right-wing “news” media. Moreover, many of the talking points that come to dominate the Fox News and its related media were first authored in white supremacist/white nationalist online spaces:

In the same vein, Donald Trump’s newfound concerns about the tragic case of Kathryn Steinle, a white woman who was killed by Francisco Sanchez, an undocumented Mexican immigrant, is an act of obvious political opportunism. The combustible mix of race, immigration and white victimology was too tempting for Trump, and the white nativist impulses of movement conservatism, to resist.

This world of imperiled white people is a fantasy that is shared by both overt white supremacists and the mainstream right-wing media. It is a fantasy that ignores the following facts: Crime in the United States is at record lows. Most violent crime is intra-racial. Because of that reality, a given person is much more likely to be killed by a member of their own “racial” group than by someone outside of it. Moreover, most people are killed or otherwise assaulted by a person they know or who they are related to. Trump’s particular concerns about crime by undocumented immigrants are also specious—for a variety of reasons, undocumented immigrants are less likely to commit crimes than other groups.

(In all, American white women (and women more generally) are much more likely to be killed, assaulted, or otherwise victimized by their husband or boyfriend than they are by Donald Trump’s nightmare dream of “illegal” Mexican immigrants.)

There is a larger meta-level assumption driving the right-wing hate media and Donald Trump’s false concerns about white people who are victims of crime by non-whites: the White Right believes that crime against white people is underreported by the mainstream news media. As with other matters, the facts are none too kind to the worldview held by American conservatives—in reality, crimes against white people are over reported relative to their actual percentages by the TV news, while crimes against black and brown people are grossly under reported.

The white right and its sealed alternate reality media bubble where white people are victims, and white women preyed upon by dangerous black and brown “outsiders,” is part of an old and very ugly type of white racial paranoia. In the 19th and early 20th centuries, white women were supposedly being lured into interracial sex and white slavery by the Chinese with their opium dens, Eastern and Southern Europeans who grabbed them off the street and sold them into prostitution, or “Mexicans” who waylaid and dragooned them. We can also not forget the particularly American habit of the lynching tree where obsessions with the “black beast rapist” and other false rumors and lies about black men having sex with white women (the vast majority of it willing, wanted, and mutually consensual) resulted in thousands of black men being tortured, vivisected, shot full of holes, and/or burned alive.

In the 19th and 20th century Donald Trump and the right-wing hate media’s obsession with imperiled white women such as Kathryn Steinle, or a crime wave by “illegal” immigrants from Latin and South America, would be generously described as “yellow journalism.” Fox News, the broader Right-wing echo chamber, and overt white supremacist media, are generating racial panics and white victimology screeds via Google, where they put in searches for words such as “white,” “black,” “victim.” and “crime.” From this piss-poor thinking and methodology they can then concoct a fantastical narrative of white people who are victimized en masse by black and brown criminals.

Dylann Roof and other white, right-wing domestic terrorists have been galvanized by Fox News and the broader right-wing media. Donald Trump, and the Right-wing media that are aiding and abetting his nativist lies, are encouraging vigilante violence in defense of white women (and white men who are now emasculated because they are unable to defend “their” mothers, daughters, sisters, kin, and community). And just as the right-wing media has done in the past when their exhortations to violence have born fruit, they will deny having ever encouraged such an outcome.