The president has made an admirable push for prison reform. Unfortunately, it isn't nearly enough 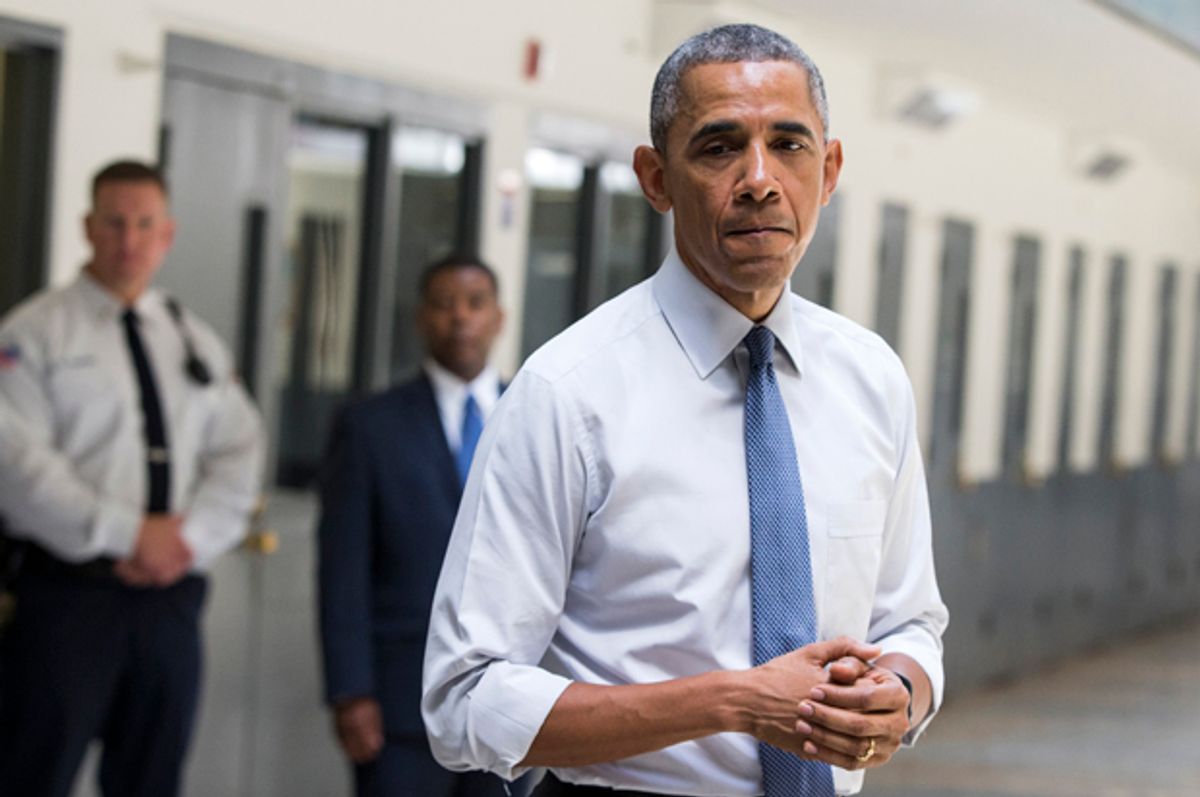 President Obama’s recent moves to address the United States’ singular problem with mass incarceration culminated Thursday when he became the first sitting president to visit one of his government’s many federal prisons. The visit follows the president’s announcement on Monday that he’d granted thecommutation of 46 Americans’ prison sentences—all drug-related—levied under draconian Drug War laws and Tuesday’s speech before the NAACP’s annual conference, in which the president proposed reforms and remarked on the “inequities” of the criminal justice system.

But something looms over and haunts the president’s talk about those inequities, the astounding racial and economic disproportionality in the system. An even bigger monster lurked behind the rhetoric, something it felt Obama might have been trying to keep caged with vague description amidst an otherwise data-heavy and precise address. It wasn't until late in the speech that Obama alluded to the problem, speaking of the vast prison apparatus of recent decades as “containing and controlling problems that the rest of us are not facing up to and willing to do something about.”

He then repeats the frightening notion again with the same word: "contain." Police and prisons have been used, he said, to “contain the hopelessness when we are not willing to make the investments to help lift those communities out of hopelessness.” He continues: “That's not just a police problem; that's a societal problem.”

Yeah, that’s a pretty big problem. It means that we’ve effectively warehoused a problem that we don’t know what else to do with: the problem of poor people, whether it be the still-uncorrected problem of black poverty or that of general, cross-racial poverty that comes as a side effect of contemporary global capitalism, which so enriches others. The problem of the former is now compounded by the intensification of the latter. Obama addressed both dilemmas in March, when he invited “The Wire” creator David Simon to the White House for a discussion of mass incarceration. Simon has been clear that his landmark show, Obama’s favorite, was about the “triumph of capitalism,” about those who get left behind and what to do with them. Obama and Simon spoke frankly about the effects of globalization and deindustrialization and the misery left in its wake, especially in the inner-city.

The two spoke about the drug economy that came into places like Baltimore after the above-ground economy disintegrated and white capital fled. The two spoke of the crisis of deindustrialization and the evaporation of well-paying jobs, or really jobs of any kind in some of the forgotten corners of America. Obama concluded the discussion by saying that it’s “ultimately jobs and re-industrialization” that would preclude the need for mass incarceration and, as he’d say on Tuesday, “lift those communities out of hopelessness,” that hopelessness and desperation that the prison system has grown to “contain.”

The drug problem is a poverty problem, says Obama. “What we understand,” he said to Simon, is that “if kids are left so far behind that they don’t have recourse, they’re going to see what else is available to survive.” Or to put more starkly: Survival becomes a crime.

So while we congratulate ourselves on not having political prisoners like China or Cuba, we do have what we might call prisoners of politics. Again, Obama described the incarceration crisis as “containing and controlling problems that the rest of us are not facing up to and willing to do something about.” Politicians have not been willing to face up to and do something about the underlying problems and all too willing to seek means of “containing” them—i.e., warehousing the people left behind. The political decisions made in the age of neoliberalism and globalization, concurrent with the War on Drugs, have resulted in a surplus population that cannot be absorbed by the sort of economy advocated by Washington and a severe criminalization of the one economy that does work in communities left behind.

How much worse are political prisoners than prisoners of politics? How meaningful a distinction can be made when political decisions can be seen to create both the circumstances for the “hopelessness” and the means of obsessively “containing” it? Black Americans, it is well argued, have never been admitted into the white world of economic well-being despite the civil rights reluctantly and slowly granted; and the racial wealth gap is an unmitigated societal disaster. Meanwhile, since Reagan, the police and prison apparatus has become a quasi-militarized leviathan with a clear preference for poor black men at every level.

Since emancipation, black Americans have been a “problem,” as W.E.B. Dubois described it in 1900, that white America didn’t know what to do with. Eldridge Cleaver, in his prison writings in 1965, saw the prison structure as a way to shunt the “problem” of black Americans, and he found himself and his fellow black inmates “in vociferous rebellion against what we perceived as a continuation of slavery on a higher plane.”

“All respect we may have had for politicians, lawyers, governors, presidents, senators, congressmen was utterly destroyed as we watched them temporizing and compromising over right and wrong, over legality and illegality, over constitutionality and unconstitutionality. We knew that in the end what they were clashing over was us, what to do with the blacks...”

What to do with the blacks. Did that question get answered in the five intervening decades? “You’ve got entire generations of men being locked up,” said Obama in his conversation with Simon. Is that what we did with black Americans, warehoused “entire generations” of the ones we didn’t know what to do with, the ones whose hopelessness we saw as a danger?

But as income inequality widens and the economy sorts more of us to the bottom—black, white, Latino and otherwise—Cleaver's concern might need an update: What to do with the poor? In the new normal of low-paying jobs, even many of those lucky enough to work are in poverty. Studies find that poverty itself is being criminalized. Poverty, debt, desperation and hopelessness grow in America without regard to race, and our plan since around 1980 has been to simply warehouse those left behind. Too much poverty and desperation is dangerous, for governments and the social order, so it's not unwise, at least in the short term, for governments to decide to lock that danger away. “But prisons do not disappear problems,” writes prison abolitionist Angela Davis, “they disappear human beings.” Have we just been hiding a problem we’re unwilling to solve? If so, it cannot be disappeared by locking it out of the discourse.