Adam Sandler's insulting "Ridiculous 6" defense: Being "pro-Indian" looks nothing like this 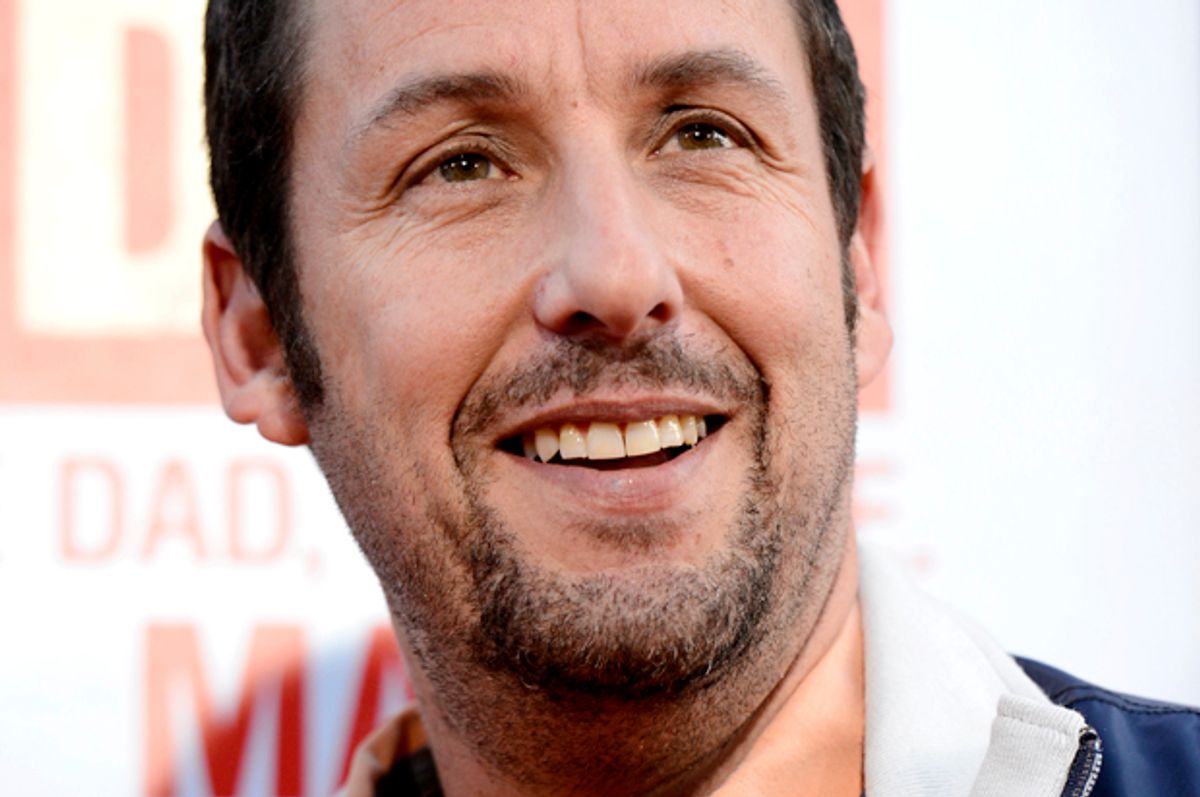 Three months ago, a group of Native American extras walked off the set of Adam Sandler’s new film, “The Ridiculous 6.” Not only were the jokes racist and misogynistic, they were just plain terrible. With names like “Sits-on-Face,” and “Beaver’s Breath,” the Native women were the predictable butts of “pee-pee-touch” jokes.

Now, little kids love poopy and pee-pee jokes. Frankly, I think they should. The world needs more jokes about the impolite and unspeakable because we’re all becoming too precious for our own good. In the past, I’ve rooted for The Zohan, whose Quixotic infatuation with “silky smooth” hair was on the same third-grade level as Captain Underpants, a cartoon hero in tight-whiteys. But if Captain Underpants makes jokes about having to use the potty, Sandler’s latest effort throws his fans into the sty and makes them wallow in it.

Should you be a pig, “The Ridiculous 6” will make your anatomically human-ish heart sing with joy. But, contrary to popular belief, pigs don’t actually love shit the way that, say, dogs and dung beetles do. Pigs need moisture to protect a pale and delicate skin that cannot withstand the sun. Ergo, they roll around in the mud. That mud is often mixed with poop, the inevitable byproduct of something else that pigs really love, which is food. Cheetos. Doritos. Oreos. Anything with e or o in it, really. No insult meant here to pigs, who are intelligent, delicious creatures deserving of respect.

Could Sandler’s P.R. problem get any worse? Of course it could. Yesterday, Sandler dug himself into a hole by affirming that “The Ridiculous 6” was a “pro-Indian” film. He explained: “It’s really about American Indians being good to my character and about their family and just being good people.”

Alas, poor unhappy Gilmore, we hardly knew ye understood so little about the medium that made you so very rich. To explain, let me begin by making three observations. First, “Me smoke peace pipe, Kemosabe”-style jokes don’t only reduce First Peoples to stereotypes, they also mindlessly reinforce every negative stereotype Hollywood has manufactured about them.

Second, the “White Savior” trope goes like this: Clueless white person stomps all over Noble Savages who fight against Regular Savages, and then receives Enlightenment for which he is eternally grateful (but will never share credits, profits or royalties), for he has already rewarded the Noble Savages with the greatest of all gifts: the opportunity to help him.

Third, when the White Savior film is “historical,” it can even be sanctified with an Oscar nomination for best picture — an Oscar that “Dances With Wolves,” 1990, actually won.

It’s not only the subject matter that set the Twitter outrage machine into motion this past April and sent the extras storming off Sandler's set. Even a mainstream family comedy can make jokes about race and make it work, if the jokes are smart and actually have a point. Consider a much discussed scene from the sitcom “Fresh Off the Boat,” in which young Eddie Huang (Hudson Yang) gets a verbal smackdown in the school cafeteria by Walter, a black classmate.

“Get used to it,” Walter declares firmly. “You’re at the bottom now. It’s my turn, chink.”

Wait -- did he just say “chink” on prime-time network TV? The outrageous scene was funny because it was out of the mouth of babes, but also because it threw shade on yet another trope, the Ladder to Success, which mostly works for well-connected white people but not so much for everyone else.

Consider even the most offensive and damnably flexible of racial jokes, the one about the traveling salesman who visits a farm. (In its fullness, this joke is on par with the exercise in obscenity known as “The Aristocrats,” designed to provoke outrage.) The salesman spots an outhouse with a television antenna sticking out from the roof, and asks the farmer about it. Farmer responds, “I rented the shitter out to [ethnic group A], and now 15 of ‘em are living in there!" Amazed, the salesman asks, “How can such a large family fit in such a small space?” Blah blah blah, add farm animals and daughters, etc., until it all builds up to the punch line: “I guess those [ethnic group A] weren’t as dumb as I thought – they rented out the basement to [ethnic group B]!" A terrible joke, indeed — and an extension of that Ladder to Success referenced above. Even the most offensive jokes can illuminate some terrible truth about racism in America.

There is no Oppression Olympics, of course — nobody wins in these scenarios. But Native Americans are more likely than most other racial groups to be killed by police. There is virtually no media attention being paid to these deaths. No social media outrage, no cover stories in the New York Times. The recent death of an unarmed, young married mother and pregnant Native woman at the hands of the police generated no outrage, even as the shooting death of a dog at virtually the same place and time provoked a shit storm on social media demanding justice … for the pooch. The rest of the deaths are met with shrugs, facilitated by the casual racism that allows major comedians like Sandler to brush off jokes dehumanizing the peoples of the First Nations as being all in “good” fun.

“The Ridiculous 6” is supposed to be a parody of the western as a genre, but it’s too bad that Sandler didn’t do more research. 1974's “Blazing Saddles” is still shocking, still hilarious, but Mel Brooks was the last writer-director to succeed with an open parody of the western. In reaching for the comedy of the last resort, Sandler’s effort here smacks of desperation or pandering. Either way, it doesn’t speak well of the comedian, who seems oblivious to the fact that one of the greatest westerns ever made was “Hombre,” a frankly astonishing 1967 film based on the eponymous novel by Elmore Leonard, and starring Paul Newman as a white man raised by Indians. Which happens, hey hey, to be the setup for “The Ridiculous 6.”

But despite its equally ridiculous title, “Hombre” goes on to tackle the appalling mistreatment of Native Americans, the toxicity of sexual violence, and the hypocrisies of civilization head on, the entire film fairly quivering with righteous anger and ferocity right up to its melodramatic end. I would dare Sandler to deepen and thicken this stew of racial resentments, and use comedy to challenge assumptions the way Leonard did. But I don’t think he has it in him to take those kinds of risks. In the meantime, as the world waits for Netflix to air Sandler’s latest whatever, try watching “Reel Injuns” instead. It’ll make you cry so hard you’ll laugh. At yourself.