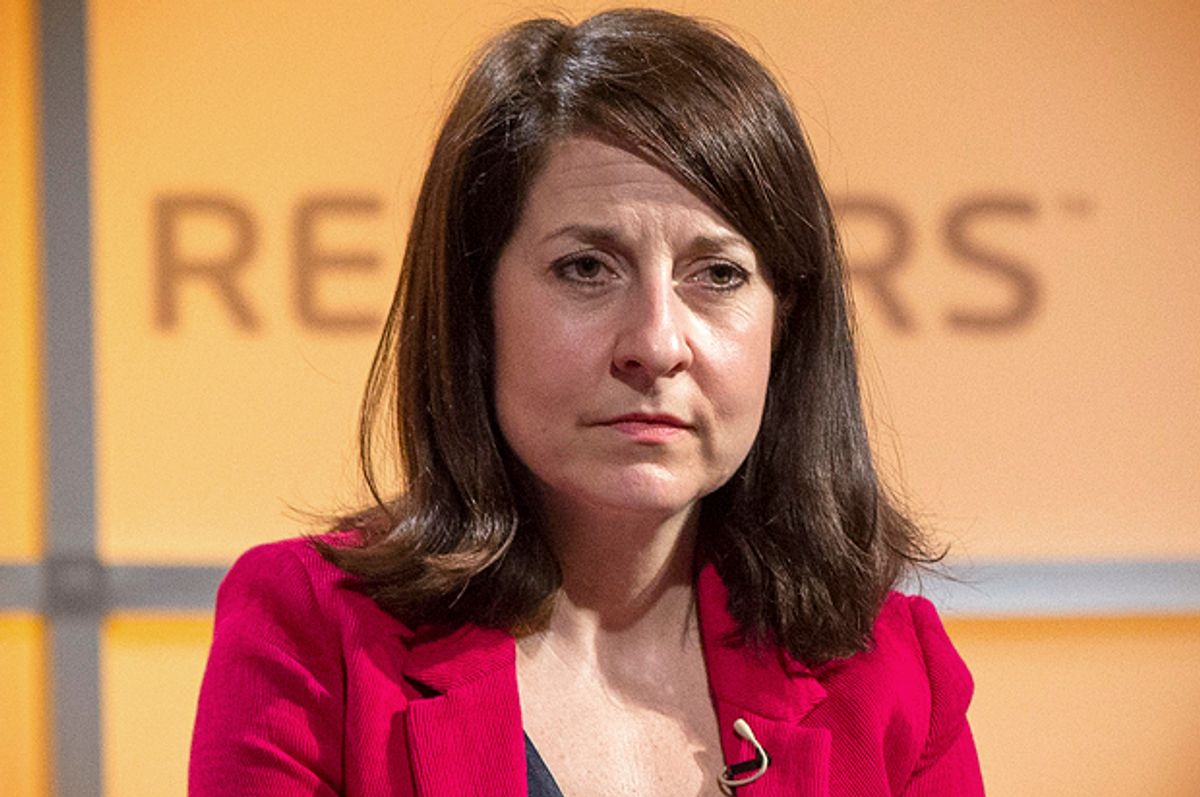 Women, take notes. Whatever your size, whatever your build, this is the correct response to an inquiry about your weight. As British Labour Party leader contender Liz Kendall reportedly put it this weekend, "F__k off."

Kendall is a rising star in British politics. If you were to read other coverage of recent activities, you might have picked up her speech about galvanizing her party so "people have the power to shape their lives, the services they use, and the communities in which they live." She is also woman so let's also talk clothes and babies and her body! Spoiler: This is about the Mail.

In an interview with the Mail's Simon Walters on Sunday, she is described as the "unmarried Kendall, 44," asked why her last relationship ended, and if she wants to get married and have kids. It's possible that a tabloid would ask similar questions of a single male politician — here in the U.S., 46-year-old Cory Booker has certainly fielded his share — but then the narrative moves on. There is commentary on how the "slinky brunette" "maintains her lithe figure" and the cost of her "emerald green suede high heels." But for the real kicker, Walters writes, "She looks the same weight as the Duchess – about 8 st [about 112 pounds] – though when I ask she slaps me down with a raucous 'f__k off!' adding quickly: 'Don’t print that.'" But print it he did. And I'm glad.

I'm glad because this is what needs to be said, repeatedly, when women are asked about their weight in any context other than certain doctor visits and Olympic boxing matches. What's my weight? F__k off, that's my weight. (Also acceptable: Amy Schumer's observation that "I’m probably like 160 pounds right now, and I can catch a dick whenever I want.") Speaking to the BBC Sunday, Kendall said that she "cannot wait for a world when women are judged the same as men," though the report did note that the Mail approvingly referred to Conservative politician George Osborne as "a real skinny malink" in 2014. Yet Kendall is entirely correct in her observation that "I just think it's unbelievable that in the 21st Century women still get asked such very, very different questions from men." It's a reality borne out again and again, every time a woman walks a red carpet or makes an action movie or appears in her capacity as secretary of state and fields inquiries about who her favorite designers are. It's proven every time she has a child and is instantly assumed to be flaunting her post-baby body.

Perhaps the day will come when a woman can just have a career without irrational obsession over her weight. Perhaps she can be judged by something other than her shape in relation to that of Catherine, Duchess of Cambridge. And I believe those things will change when women stop being polite and deferential and apologetic to others — and themselves — about their size. It'll change when we all take ownership of saying no to rude and dumb questions about our bodies, preferably with a profanity or two thrown in.