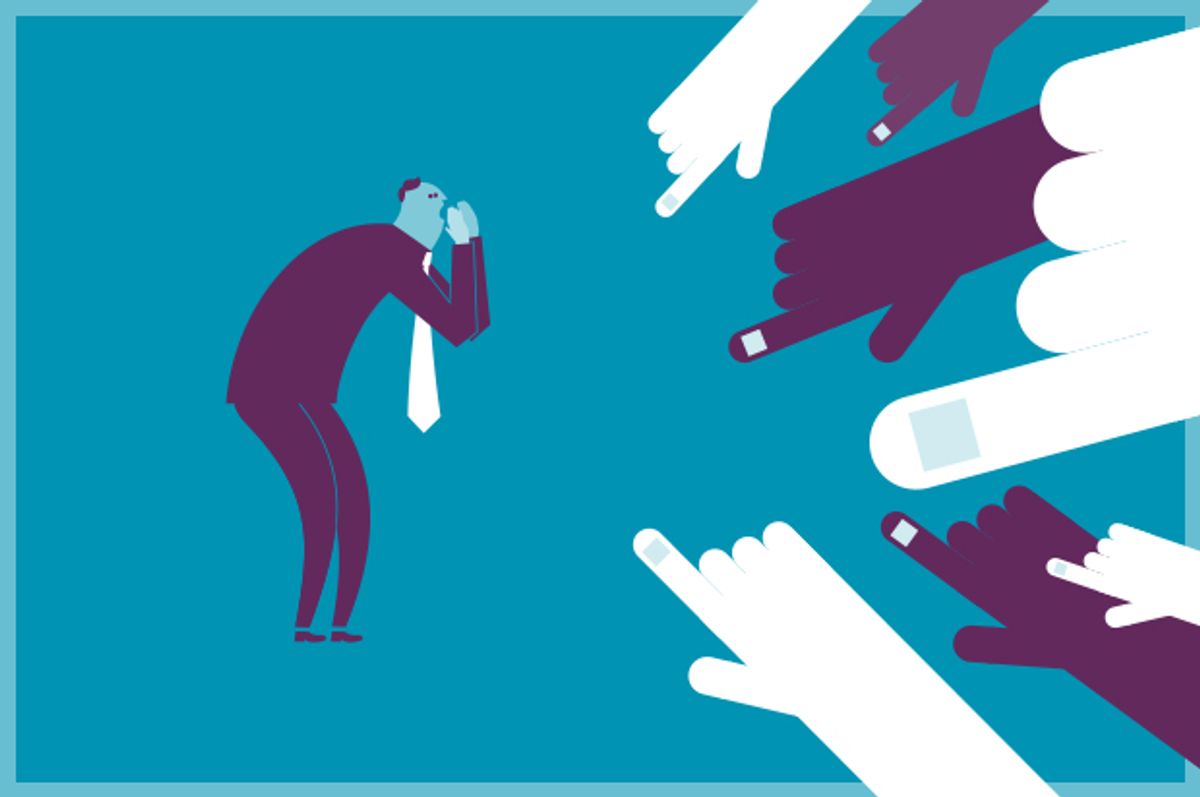 Can we please get someone to make a chart or a list or some other matrix that clearly defines how a public shaming ought to proceed? I'd like it based on hard data, factoring the severity of the person's transgression, the extent of his or her hypocrisy and, ultimately, containing a clear protocol for what the limits of that individual's social punishment should be. Now that Ashley Madison's client base has allegedly been compromised, we're going to need it.

We are truly living in a glorious age of humiliation. You'd probably have to go back to the Plymouth colony to find another time when pointing fingers and potentially ruining lives and families was such a strenuously pursued social occupation. Now, Krebs on Security reports that Ashley Madison — the 14-year-old service for people who subscribe to the belief the "Life is short. Have an affair" — has been hacked. Krebs says that "The still-unfolding leak could be quite damaging to some 37 million users of the hookup service … The data released by the hacker or hackers — which self-identify as The Impact Team — includes sensitive internal data stolen from Avid Life Media (ALM), the Toronto-based firm that owns AshleyMadison as well as related hookup sites Cougar Life and Established Men."

ALM chief executive Noel Biderman confirms the breach, saying the company is now "working diligently and feverishly" to rectify the situation. And in a statement the company adds, "At this time, we have been able to secure our sites, and close the unauthorized access points." The hack is reportedly a response to the company's "service" of charging an extra fee for a "full delete" of a user's profile. The hackers say, "Full Delete netted ALM $1.7mm in revenue in 2014. It’s also a complete lie." They have threatened to "release all customer records, including profiles with all the customers' secret sexual fantasies and matching credit card transactions, real names and addresses, and employee documents and emails."

The "world's leading married dating service" boasts over 37,610,000 members worldwide — a figure I am frankly skeptical of, especially given the company's near-PETA level knack for relentless, button-pushing self-promotion. That said, of course the company does have customers and of course those patrons are likely quietly soiling themselves right now. You don't have to be a client of an adultery site to shudder at the implication of the words "sexual secret fantasies" and "real names." And in the wake of the recent dumpster fire that was Gawker's outing of a married media executive who reportedly tried to procure a gay escort, the bar for what constitutes public shame-worthy behavior has officially been lowered, ground up into tiny chips, and thrown in all our faces. "Given the chance," Gawker's Max Read explained last week, "Gawker will always report on married c-suite executives of major media companies f__king around on their wives." I am sure they will never run out of material, then. Doesn't actually make that "reporting," though.

So let me just stake my own claim now. There are a very limited number of circumstances in which I now wish to have an opinion about another person's sexual behavior. I will care if it is not about sex but violation — Bill Cosby, you could step out on Camille for decades while playing the good dad on TV and big whoop. It's those dozens of rape allegations that people are having a hard time with. I will care if you are using your power and influence in a way that actively works against other people's relationships, or if you moralize about how other people should conduct themselves sexually while secretly pursuing those same activities. I will care if you're stepping out on my tax dollars or my taxpayer time. Otherwise, I may not approve of your life choices, I may not make the same ones you do, but I'm going to go ahead and use my time and energy to think about other stuff than who you're banging and how shocked and horrified I ought to be about it.

Maybe you have worked out an arrangement about what happens on the road. Maybe you've gone through a tough patch and worked it out — this weekend Kendra Wilkinson publicly defended her husband, Hank Baskett, as "the love of my life" after an alleged infidelity on his part last year. Maybe there are circumstances nobody else knows about. Or maybe you really are just a selfish person. That's not a crime, and I don't want to live in a culture that treats it as such.

The Ashley Madison hackers have written, "Too bad for those men, they're cheating dirtbags and deserve no such discretion." But yeah, I think cheating dirtbags do. I think that just because you make a lot more money than I do doesn't mean you deserve to be outed. I think just because you had sex with someone who's not your wife on your last business trip, you not are accountable to anyone but your wife. Because where does this line of "Let's drag you into the public square and pelt you" get drawn? Is it OK to out someone as a cheat? Is it only OK if he's a high-ranking businessman? Is it then OK to make fun of a woman executive when her "crotch intensive" shopping list is leaked? Where does it stop? I don't know, maybe we just put cameras on all the public toilets and then wait to collectively judge the next person who gets food poisoning. How would that be? Sounds fun, right? Or maybe instead we could try being grown-ups. And maybe we could remember that we all have private lives; we all have sex lives, and as long as they're consensual, they're nobody else's damn business. Not Gawker's. Not Twitter's. Not mine.