Rich, white & in total control: The clearest evidence yet that our democracy is broken

GOP politicians like Scott Walker work hard to suppress the vote. New data gives us a good idea why 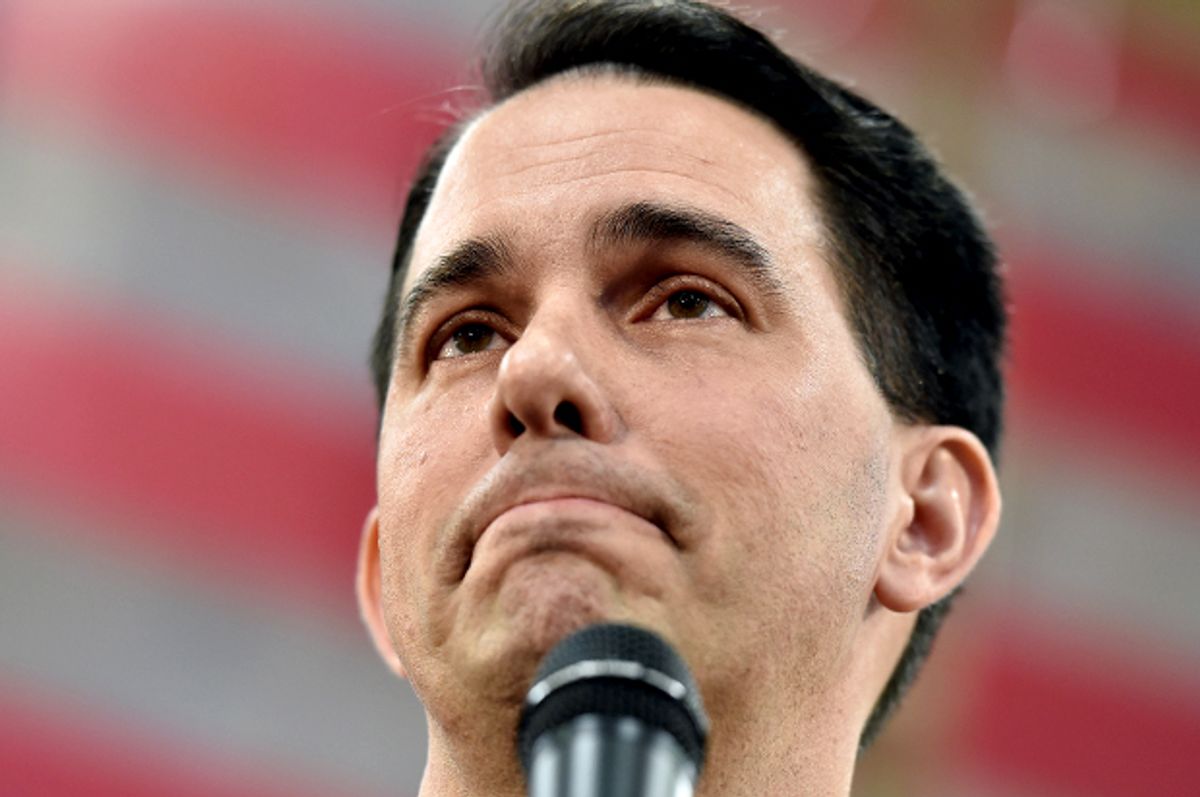 This week the Census Bureau released their data on voter turnout in the 2014 election, and the numbers are abysmal. In 2014, only 41.9 percent of the voting age citizen population turned out, the lowest number census has recorded since they began collecting data in 1978. But these broad numbers obscure an even more important reality: that the decline in turnout between the 2012 Presidential election and the 2014 midterm was strongest among low-income people (see chart) and people of color. As it happens this is also the first election since the Supreme Court struck down a key provision in the Voting Rights Act and conservatives rushed to pass discriminatory laws aimed at suppressing voter turnout. There is a large body of evidence suggesting that when voting is easier, more people vote, and that voter suppression laws disproportionately impact the poor and people of color. The turnout numbers from 2014 are dramatic: At the lowest income bracket, less than 1 in 4 citizens of voting age turned out, and only half were registered to vote, a drop of 48 percent from the presidential election. At the highest bracket the Census records data for ($150,000 and above), 80 percent were registered and 57 percent voted, a drop-off of 29 percent from the presidential election. However, another data source that surveys the wealthiest 1 percent found that in 2008, 99 percent voted, suggesting bias at the very top might be even higher.

In a previous Demos explainer, I argued that lower class bias in voter turnout would lead to more economically progressive policies and benefit the poor. In an upcoming piece, I expand on that argument with new data. One thing I examine is how policies that reduce turnout among people of color effect policy. To do so I used the American National Election Studies 2012 survey to examine differences in public opinion between white voters and non-white nonvoters. I focus on four questions about fundamental disputes about the role of government: whether government should increase service, boost spending on the poor, guarantee jobs and reduce inequality. I examine net support, meaning I subtracted the percentage of people in support of the law from the percent in favor. The divergent preferences of nonvoters mean that boosting turnout would change government policy to be more beneficial to the poor. The implications of universal voter turnout would be dramatic, as a brief examination of the international, historical and state level data suggest. Examining data from 19 countries over 22 years, Peter Lindert writes, “A stronger voter turnout seems to have raised spending on every kind of social program.” A study of Latin American countries from 1970 and 2008 finds that increasing democracy boosted spending on education, health, social security and welfare. Economists Dennis Mueller and Thomas Stratmann estimate that if voter turnout in increase from 40 percent to 80 percent, it would reduce the Gini Coefficient (which measures inequality on a scale from 0 to 1) by .04, which is equal to the entire effect of taxes in the United States. New studies examining differences in class bias (differences in turnout between the rich and poor) at the state level suggest that boosting turnout would reduce inequality by pushing policy in a more progressive direction.

Obviously, voter turnout can’t remedy all the gaps in participation in the American political system. As the chart below shows, the richest Americans engage with the political system far more across the board. But this only increases the importance for reducing the bias in voting, which is the simplest to remedy. One archaic barrier that political scientists agree reduces turnout is registration. By passing automatic voter registration, which places the responsibility for registering on governments, rather than individuals, we could easily boost turnout. Other reforms to make voting easier, such as making Election Day a holiday, non-partisan voter registration drives, and early voting periods, should also be implemented.

In addition, we must fervently fight voter suppression. As Naila Awan has noted, conservatives in North Carolina used the gutting of the VRA to ram through a bill to eliminate same day registration, early voting and pre-registration while also passing a strict voter ID law. In Wisconsin, Scott Walker has pushed for a voter ID laws that would disenfranchise as many as 300,000 eligible voters. Such bald attempts to suppress voting deserve to be universally condemned. In addition, we should increase the voices of average Americans through a robust public financing system. The donor class is 90 percent white and 70 percent male.  A whopping 42 percent of campaign contributions come from a tiny portion of donors, the 0.01 percent. Rather than 25,000 hyper-wealthy Americans dictating policy, a public financing system could increase the representation of people of color and working class people as well as women, in the donor pool. Research on the New York City public financing program suggests that it boosted diversity in the donor pool. Creating fair districts should also be a priority, because it would make every vote matter, encouraging voter turnout. Voting matters. The best evidence for why it does is how damn hard oligarchs fight to make sure you can’t.