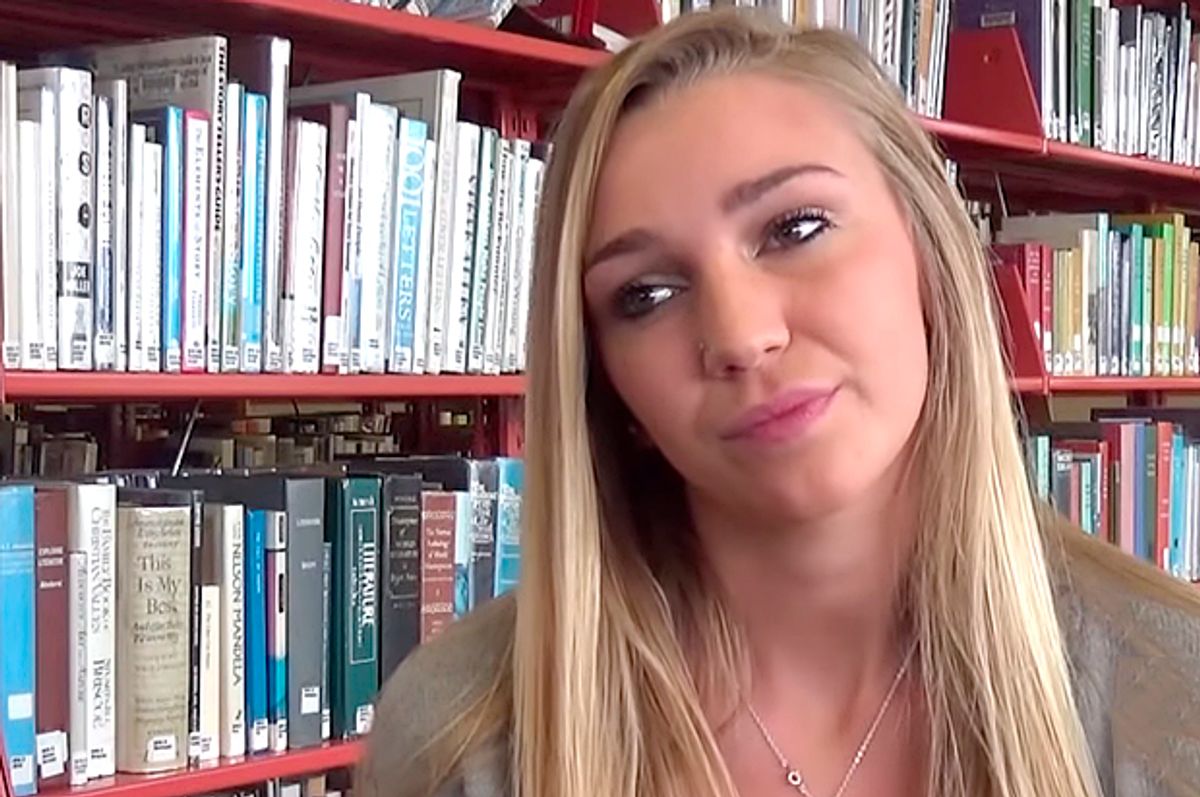 The new post-crash economy -- with its high youth unemployment, flat wages, and surging college costs -- has reshaped a lot of people's lives. One way it seems to be remaking the college experience is to push a lot of young women into various kinds of sex work. Is that good or bad? Well, that depends on personal morality -- and let's not get into that now.

Instead, let's look at the contradiction we're living with in 2015: We seem to be on a collision between American Puritanism -- which dates back to before the founding of the nation -- and the gospel of "personal responsibility," which acquired a special force with the conservative movement that went mainstream with Reagan's presidency.

The latest news is a story from Playboy that describes women who can't pay for college by working more traditional part-time jobs and who instead post photos and videos for an online audience. (Fans of "True Detective" may remember the scene of a raid of a home-based Internet pornography business featuring detective Ani Bezzerides' college-bound sister, early in the current season.)

The story mentions more than 10,000 women who work on the MyGirlFund.com site to pay for their education, and refers to a more public case in Oregon that's gotten wider attention. There are women who do this work because they want to, but surely some of these students would rather be working at a restaurant or bookstore or somewhere more conventional — if wages at those part-time jobs could keep up with mounting college costs.

And in the long run, this could all backfire. Fusion, who originated the story, puts it this way:

With tuition costs and living expenses on the rise, thousands are turning to online sex work—MyGirlFund is hardly the only sex site helping college students make ends meet. But as students, these women face questions unique to their post in life: What if their professors find out? Could they get in trouble for using university internet? Will the work come back to haunt them when they apply for jobs down the road?

Let's leave the moral issue -- which people are bound to disagree over and which often obfuscates the picture -- aside for a moment and look at the economic pressures. Earlier this year, youth unemployment, according to the Bureau of Labor Statistics, was almost 19 percent -- 30 percent for young African Americans -- and last year it was even worse. And this part is important:

Young people often have little or no work experience, and in the current U.S. economy may find themselves competing for the same jobs as older workers. Those jobs include food service, retail and clerical work, which were at one time the special province of young workers. When the economy tanked in 2009 and companies laid off thousands of workers, competition for those jobs intensified and young people fell to the bottom of the pile.

Things have improved slightly since these numbers came out, but the all-against-all competition is not much better.

College costs, which used to be negligible at public universities, have shot up in recant years. What happened? The collapse of state funding is part of the reason: Some states offer about half the support they did for public universities in 1987; the University of Illinois at Chicago now offers about a third of what it did then. The number of administrators are way up, as are fancy dorms for wealthy students, elaborate gyms, and other luxury offerings that have sent tuition and fees at private schools to go through what we used to think of as the roof. As the Washington Post reports:

The ranks of the most expensive colleges continues to swell: 57 colleges are charging $60,000 or more for tuition, fees, room, and board for 2014-15, according to a Chronicle of Higher Education listing of tuition data released by the College Board. In 2009-2010, only five colleges surpassed the $50,000 mark. And just 10 years ago, I wrote an article about how Bates College in Maine went past the $40,000 mark, which at the time was a line few wanted to cross. Just 75 colleges at the time had charged more $40,000. Today, the average sticker price of a private four-year college is $42,419.

Numerous other democracies have figured out how to deal with all of this, but so far the U.S. has so far failed miserably. It's not for nothing that Sen. Elizabeth Warren has tried -- mostly, thanks to power of finance and the cult of personal responsibility -- to bring some relief to the towering amount of student loans many recent (and not so recent) graduates carry.