"Good luck, lady, with that monster!": In the showdown between a diner owner and screaming toddler, does anyone win? 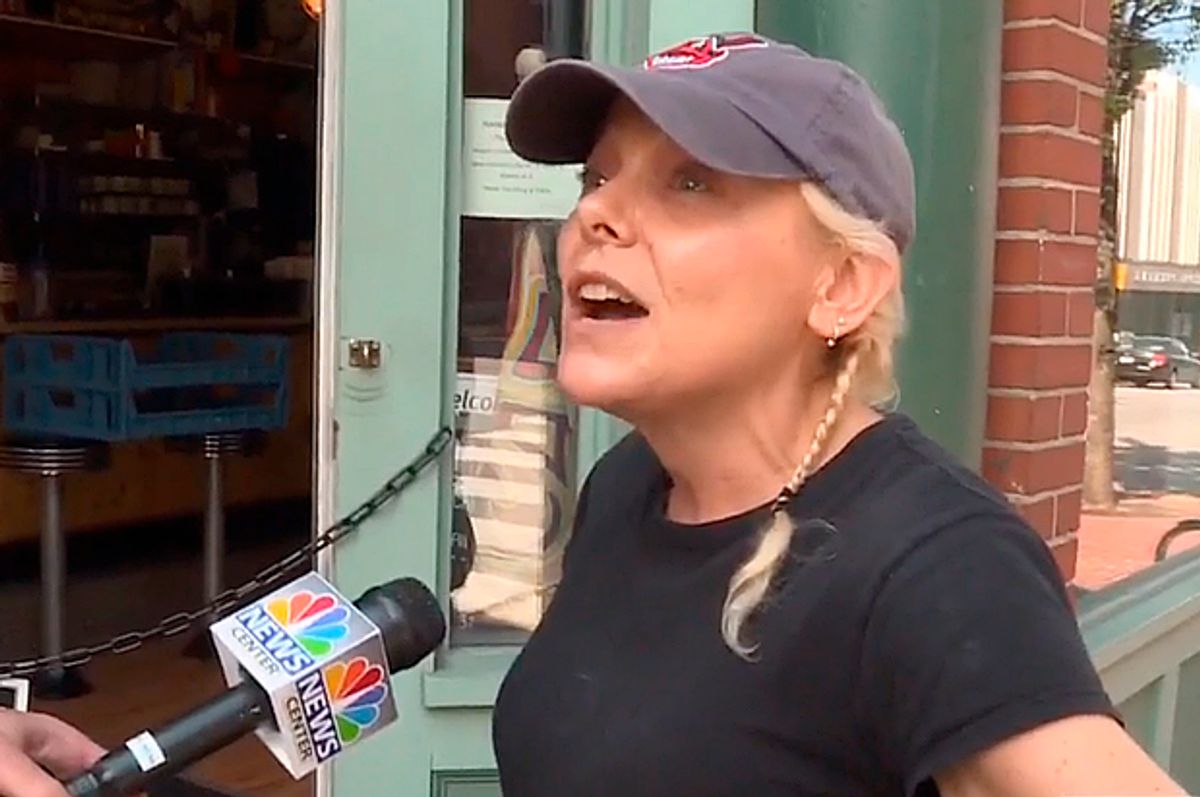 There are a handful of topics that are surefire social media napalm. Ethics in gaming journalism. Vaccine safety. The existence or non-existence of God. Children in restaurants. This is about that last one.

You've got to give the owners of Marcy's Diner in Portland, Maine, credit for fully committing to the stance that, hey, it was the 2-year-old who started it. Because all disputes, slights and grudges must now be tried in the court of social media, the controversy began over the weekend, when an irate parent posted on the restaurant's Facebook page that "I had the worst experience at this establishment. The owner is an absolute lunatic and screamed in the face of my almost 2 year old child bc she was crying. Who in their right mind would behave like this unless you are deranged. You have a problem with a child crying then you are not suitable to run a business. If it bothered you so much you should have spoke to me and not traumatized my child by screaming in her face."

But owner Darla Neugebauer fired back with a swift rebuttal. "Iit [sic] all started because YOUR PARTY NEEDED 3 full size pancakes for this 2 year old! 3 f__king pancakes at Marcy's! I believe right here should have told me you were ignorant!… After your 4th attempt to shut her up I asked you to pack up either your rotten child or take the so important pancakes to go….. but NNNNOOOOOOO you just sit there & let your f__king screaming kid go! & piss off my staff & patrons! F__k you! And guess what? She shut the f__k up after I yelled from 5 feet away! I was in your stupid husband's face I was in! the without any balls! I have a business to run & yes I am f__king crazy & you are lucky I didn't get really f__king nuts because being physical is not something I cower from." In another post, she added that the crying had gone on for 40 minutes and added, "Good luck lady with that monster! Good thing I thrive on hate!"

Both posts have since been deleted. But speaking with WCSH this week, Neugebauer said that "Life's full of choices and you've got to live with all of them. I chose to yell at a kid, it made her shut-up, which made me happy, it made my staff happy, it made the 75 other people dining here happy, and they left, they may never come back, other people may not come in. Their loss really." She further says that "I don’t have children because I know I’d be a terrible parent," and adds she "might be a local hero."

So far, social media support has been running clear on the side of Marcy's, echoed in the sentiments of Facebook commenters like the one who declared, "You do not go out in public and ruin the eating pleasure of others because you have chosen to allow your child to cry out their issues. If that is how you are raising your child stay home!" and "Congratulations on standing your ground with the unruly child. 100% parents fault." And WCSH reports that on Monday, "A line of hungry customers [had] formed outside of the diner." But others have expressed that "Not excusing the parents...but the business owner was way out of line. She could have handled it better."

The debate over young children in public spaces is a profoundly fraught and emotional one. Four years ago, the owners of Monroeville, Pennsylvania, restaurant McDain’s received national attention when they announced they would "no longer admit children under six years of age." The gambit earned both praise and disgust from locals and rubberneckers across the country. But deciding what's an appropriate venue for a family is not always a clearcut call. I'm a parent and I'm totally in favor of an elegant, expensive restaurant asking, do you really want to bring your infant here? I also think that yelling at small children and calling them monsters and threatening to get "physical" with their parents is totally bananas behavior, and I find the whole, "Yeah, you tell 'em!" support for that tactic pretty frightening.

Here's a pretty simple rule of living in the world with other humans, regardless of whether you have kids or not: check your sense of entitlement and make the effort to replace it with a modicum of empathy for the people around you.

If you're a parent of young kids whose noise and behavior are still on the erratic side, you have got to be prepared. You have got to take into account that if your kid loses it, it's your full-time job to figure out how to quiet her, keep her from wandering and climbing around, and if necessary, throw a generous amount of money on the table and GTFO.

If you're a business owner, your obligation is to all of your patrons, which means appeasing the quiet ones but also working with disruptive ones. You have a right to ask someone to leave. I question your right to verbally abuse them.

And if you are a person enjoying a quiet and child-free experience — and believe me, as a parent, I treasure those times too — I'd ask you to remember that kids do inhabit this planet too, and to keep your expectations about that fact realistic. Kids fly on planes. Kids go to diners that serve pancakes. And before you rail about "out of control kids and lazy parents!!!!" consider that you may not know that other family's experience entirely. Two years ago, a Chili's waitress made headlines for her thoughtful, compassionate response to a crying 7-year-old autistic girl who was upset over a "broken" burger. Sometimes being patient and nice actually works. Just start from the place of treating the people around you with a little respect and a little leeway. As Neugebauer says, life's full of choices. It doesn't matter if you have children or not — why not choose the path that's neither selfish nor hostile?