It's not "just a phase": How Cara Delevingne is changing the conversation around bisexuality

The model and actress has had to defend her sexual identity, which shouldn't be defined by whom she's dating 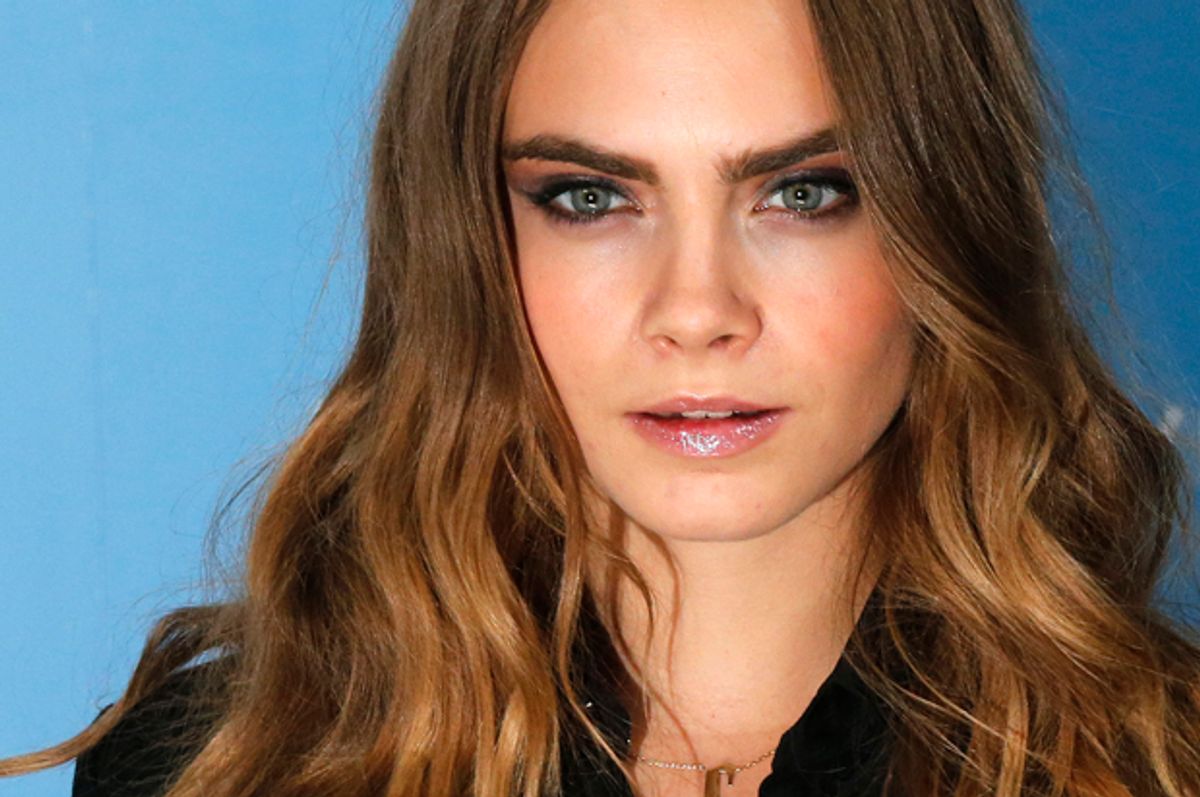 After a Page Six report that model and "Paper Towns" actress Cara Delevingne has broken up with singer Annie Clark of St. Vincent, her girlfriend of eight months, it’s time for a reminder that, as Delevingne told the New York Times, “My sexuality is not a phase. I am who I am.” She was referring to a July Vogue cover story by Rob Haskell that speculated that her interest in women was, indeed, a phase, which launched a giant backlash from those who know better. Her insistence that something so intimate and personal is not “a phase” has even more resonance if she is indeed single (or even if, as a Daily Mail report claims, she’s still with Clark). To recap: A person is bisexual not based on whom they are or aren’t dating or sleeping with at the time, but because they claim that identity.

In the Vogue profile, Delevingne said, “I think that being in love with my girlfriend is a big part of why I’m feeling so happy with who I am these days. And for those words to come out of my mouth is actually a miracle. It took me a long time to accept the idea, until I first fell in love with a girl at 20 and recognized that I had to accept it.” Her comments extend beyond a single relationship, but point to grappling with how this aspect of her sexuality fits into the life she had envisioned for herself, which is why her response in the Times owning her sexuality as an innate part of her, regardless of whom she beds, is all the more relevant.

Delevingne told the Times she saw “nothing malicious” in the Vogue story, and it’s likely nothing malicious was intended, but to even give credence to the “phase” idea puts women’s relationships with other women, or even romantic interest or attraction, in a whole other sphere than “serious” straight relationships. It presumes both that women can’t have lifelong relationships and attractions to other women, and that people will always be waiting to see if they “go back” to men (and therefore can no longer be bisexual). This is wrong on many levels, especially because it permeates the way women think about their own sexuality, preventing us from figuring out what works for us on our own timetable. I think it’s also safe to assume that if we lived in a world where bisexuality was as commonly discussed and understood as its counterparts, perhaps Delevingne wouldn’t have struggled so long to accept the idea.

As BuzzFeed LGBT Editor Shannon Keating wrote at the site:

It took me an embarrassingly long time to realize that the first sexual relationship I had with another woman wasn’t just drunk meaningless fun, but something legitimate, something that mattered — and part of the reason it took me so long is because people with cultural power, like Haskell, are so quick to dismiss queer female relationships as “just a phase.”

Whenever I made out with girls during college, my boyfriend didn’t mind. I was “just curious.” I was “just experimenting.” It’s not like I was fooling around with guys (that would be cheating!). Girls simply get drunk and kiss each other, according to the pervasive college trope. But it isn’t real.

See also: the noxious phrase “lesbian until graduation.” This is not to say that plenty of women and men don’t experiment with their sexuality in various ways, including with same-sex relationships, but they are still the ones who get to be the arbiters of what their sexual identity is. As almost any bisexual person can tell you, if you do wind up in a long-term relationship, you will probably be assumed by many people—again, not necessarily maliciously—to be straight or gay, depending on the gender of your partner.

As a petition started in response to the Vogue story rightly proclaimed, “People are quick to assume queer women’s identities are a ‘phase’ and to refuse to recognize the important relationships in their lives -- an attitude which can cause depression, result in families rejecting their daughters (or forcing them into abusive conversion ‘therapy’), and even put young women at risk of suicide.” In Delevingne’s case, clearly her relationship with Clark has had a major impact on her life and how she sees herself; no one should cast aspersions on that or devalue it, as the “phrase” terminology does, because they’re both women.

Another gross assumption we need to banish? The idea that hanging out with an openly bisexual woman means that you might be bisexual too, as a Celebrity Dirty Laundry story about fellow model Kendall Jenner implied when it asked, “Doesn't anyone else think it is strange that Kendall Jenner hasn't had a boyfriend in years? Or that she and openly bisexual model Cara Delevingne are inseparable?" That’s also not how it works, and supports the extremely insulting “slutty bisexual” stereotype. There’s a palpable sexism at play when a woman either has to be linked to a man, or automatically deemed bi. News flash: Bisexual women can be friends with other women of different sexual orientations.

While of course there’s going to be interest in whom Delevingne is or isn’t dating simply because of her fame, to assume whatever her current relationship status is determines her sexual orientation misunderstands what bisexuality truly means. It isn’t about simply what’s happening in your bed, but a core part of who you are. It’s something that each of us gets to define for ourselves, not have a label thrust upon us. Thankfully, I haven’t seen the types of story lines I was expecting in early reports of the split, of the “will she date a man or a woman next?” Instead, the story was treated with the same sad-face dramatics as any other major celebrity breakup, which is exactly what gossip equality should look like.

This goes back to the power of Delevingne’s simple statement claiming her sexuality for herself to define, no matter how many headlines it inspires, which is fitting for a woman whose Instagram and Twitter bios contain the phrase, “STOP LABELLING, START LIVING.” It appears as if that’s exactly what Delevingne’s doing. Good for her.