John Kasich has a Jon Huntsman problem: The pitfalls of a "tell it like it is" campaign

Every person (who is a centrist Beltway operative/media figure) is pumped for John Kasich's campaign! 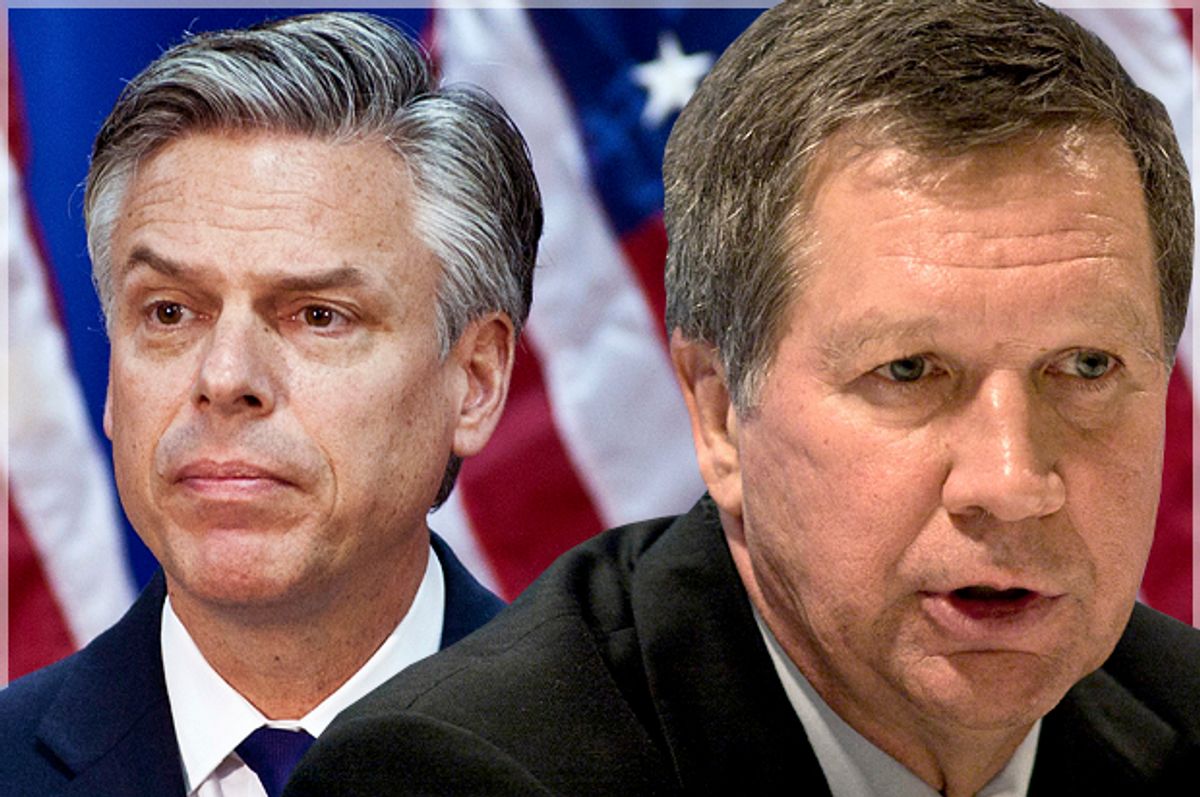 John Kasich will announce his presidential candidacy today. God willing, this will be the last one, and we can stop pretending we've never talked about these people before their announcement days.

Kasich is a figure about whom many people are excited. He is the popular two-term sitting governor of Ohio, a relatively critical state in the Electoral College. He has taken several moderate positions within his party, such as accepting the Medicaid expansion under the Affordable Care Act, and in general not shown much interest in pandering to the hard right. He is colorful and expressive with the media. And as a longtime former congressman, he played an important role in crafting the balanced budgets of the late 1990s and has some experience in foreign policy matters, unlike so many of the other governors in the race.

One major problem right now for Kasich is that "Republican voters" don't care about him. Perhaps we tripped you up in the previous paragraph about how "many people are excited" for Kasich? Indeed, many people are -- within the headquarters of the Republican National Committee and the green rooms of shows like "Morning Joe." Kasich makes for an absolutely great GOP general election candidate, on paper. He is almost exactly what Reince Priebus envisioned in the RNC's post-2012 autopsy, although it would be nice if he was also Hispanic.

This early scouting report signals an obvious recent presidential analogue: Jon Huntsman's 2012 campaign. Apologies if you forgot that even happened -- it didn't get very far. Huntsman was the figure who, according to party establishment figures and centrist Beltway pundits, was always juuuuuuuust around the corner from a major surge that never materialized. Huntsman had a mostly impeccable résumé and seemed to take pleasure in asserting his belief in anthropomorphic climate change and the theory of evolution. That needling of the GOP base, along with Huntsman's ambassadorial tenure under the Obama administration, was more than enough to finish him off with GOP primary voters. And you'll note that no candidate in the 2016 cycle has dared bother trying the Huntsman model of dispatching conservatives completely and coordinating a pitch entirely to the party's silent centrists. There's just not much there, there.

One thing about Huntsman, though, was that he was also an incredibly boring and tepid person. Even those who are usually calling for "civility" in politics were getting frustrated watching him silly-sally around and demanding that he smash Mitt Romney's head into debates stages or whatever. Kasich doesn't have this problem. He's a terribly ill-mannered jerk, per Politico:

Kasich, 63, is far from the only politician to face questions about his temperament. During his presidency, Bill Clinton was known to have lashed out at those who worked in the White House. Chris Christie’s outbursts have become a trademark of sorts, proudly displayed in clips on the New Jersey governor’s YouTube channel.

But the tales of angry tantrums have dogged Kasich throughout his long career, from the state Legislature, to the halls of Congress, to the governorship. So much so that even the famously volatile Sen. John McCain once said of Kasich: “He has a hair-trigger temper.”

And as the governor — who will formally declare his presidential bid during a Tuesday appearance at The Ohio State University — steps into the glare of the national spotlight, it seems certain that the questions about his bedside manner will only intensify.

Kasich's team is trying to thread the needle with their man: coaching him to curb the temper just enough to avoid getting into serious problems, while retaining just enough of it to "appeal to frustrated voters looking for a tell-it-like-it-is candidate who has sharp elbows and authenticity."

So the idea is to make him relatively moderate on policy and "sharp," but not disagreeably so, on style. And then somehow win on this combination.

John Kasich is going to have a tough time contending for the presidential nomination. (As will all the other candidates. Winning a presidential nomination is hard, and there are 16 people running!)  He wants to be a (perceived) moderate in the race? Voters already have Lindsey Graham and Jeb Bush and Chris Christie. Wants to be a tell-it-like-it-is guy? Chris Christie, Lindsey Graham, Donald Trump. As you'll see from this overlap, Republican primary voters already have two moderate/tell-it-like-it-is combinations in Chris Christie and Lindsey Graham. Both of them are better known than John Kasich, and both of them are polling in the toilet.

Thus lies the problem with the moderate/tell-it-like-it-is combination: The GOP primary electorate is composed of conservative voters, and conservatives voters think conservatives are the ones who tell it like it is. The GOP electorate's idea of a tells-it-like-it-is candidate is Donald Trump or Ted Cruz -- the exact opposite of what, say, a moderate Republican Beltway operative might conceive of a figure who tells it like it is. In GOP presidential politics, "moderate" and "authentic" naturally clash.