Really, it's time to shut down the GOP: A deeply unserious party, hijacked by lunatics and Fox News, is driving us all into a ditch

"News" without truth. A base that celebrates a clown. Tear the party down and start over -- for the country's sake 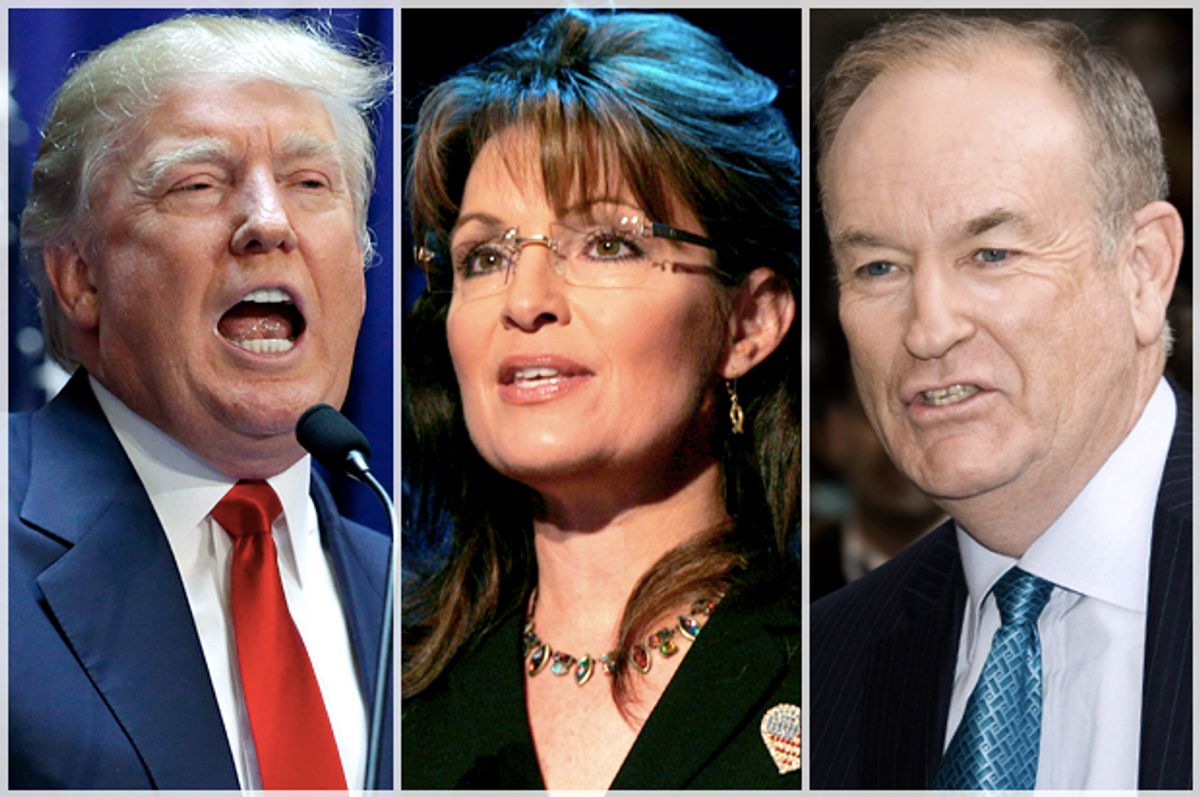 Republicans are finally noticing that Donald Trump is a political liability. In the wake of Trump’s attack on John McCain, GOP candidates found the courage to condemn his revolting shtick -- a little late, of course, but good for them. The problem, though, is that they don’t quite understand that Trump isn’t an anomaly; he’s the latest product of a party that long ago abandoned any pretense of seriousness.

Trump, quite literally, is an actor; he’s delivering the lines his audience (the Republican base) wants to hear. But he’s not the first of his kind. He’s doing what many Republicans have done in recent years: pretend to run for president in order to promote his personal brand. Trump is playing a role previously filled by people like Herman Cain and Michele Bachmann, both of whom, at one point, were front-runners in the race for the Republican nomination. And of course there’s Sarah Palin, the failed reality-TV star and once half-lucid part-time governor of Alaska who Republicans thought capable of running the country.

Everyone (well, almost everyone) acknowledges that Trump is a bloviating clown totally unfit for public office, but is he really that much different than Herman Cain or Sarah Palin? None of these people have any business running for president or vice president or any other office. Bachmann, admittedly, was at least an experienced member of Congress, but her campaign was thoroughly unserious. Like so many of her fellow Republicans, Bachmann became a Pez dispenser of fatuous Fox News talking points – and that’s the problem.

These people exist in the Republican Party for a reason: the GOP sold its soul to Fox News and the broader conservative mediascape years ago. Republicans are now constrained by these forces, which manufacture unhinged, absolutist narratives that dominate discourse in the party. Republicans, as a result, can’t afford to compromise or propose realistic policies – the zealots won’t let them. Worse still, any Republican who dares to step out of line gets pummeled on Fox News for weeks on end. In the face of such pressure, is it any wonder the GOP has become what it has?

The GOP, in many respects, is no longer a legitimate governing party. They’ve become a self-perpetuating hype machine, a jobs program for conservative political entrepreneurs. When running for office, Republicans are forced to say and do stupid things in order appease their disconnected base, whose worldview is shaped almost exclusively by conservative media. When elected, Republicans continue to say and do stupid things – and for the same reasons. This is what they’ve become. Trump didn’t emerge wondrously out of a whirlwind; he’s an authentic expression of the contemporary Republican Party. If he wasn’t, he would have been laughed out of the room, not catapulted to the top of the polls by Republican voters.

To be fair, conservatism, as a political philosophy, has a robust intellectual history – liberals are unwise to ignore that. But this isn’t the party of Edmund Burke or William Buckley or Barry Goldwater – those men had ideas. I think they’re bad ideas, but they’re ideas nevertheless. A conservative thinker like Buckley would have no place in today’s Republican Party – the dolts on conservative radio (and their rapturous audiences) aren’t interested in ideas and dialogue. They want their world reduced to good and bad, black and white, us and them. In short, they don’t want the truth - they want to be told they’re right and everyone else is wrong. And the GOP, gradually, has become a party by and for these people.

This is why Republicans ought to submit their major-party card (I’m not saying they will or even could – just that they should). Whatever they once were, they’re now an unserious party that can’t be trusted with governing. Trump’s success is a reminder of this, but the signs were there long before him.

Republicans would do well to recognize that. Don’t hold your breath, though.