The Humans of New York parodies that will save us: Talking cats, lizard people and the power of the subversive meme 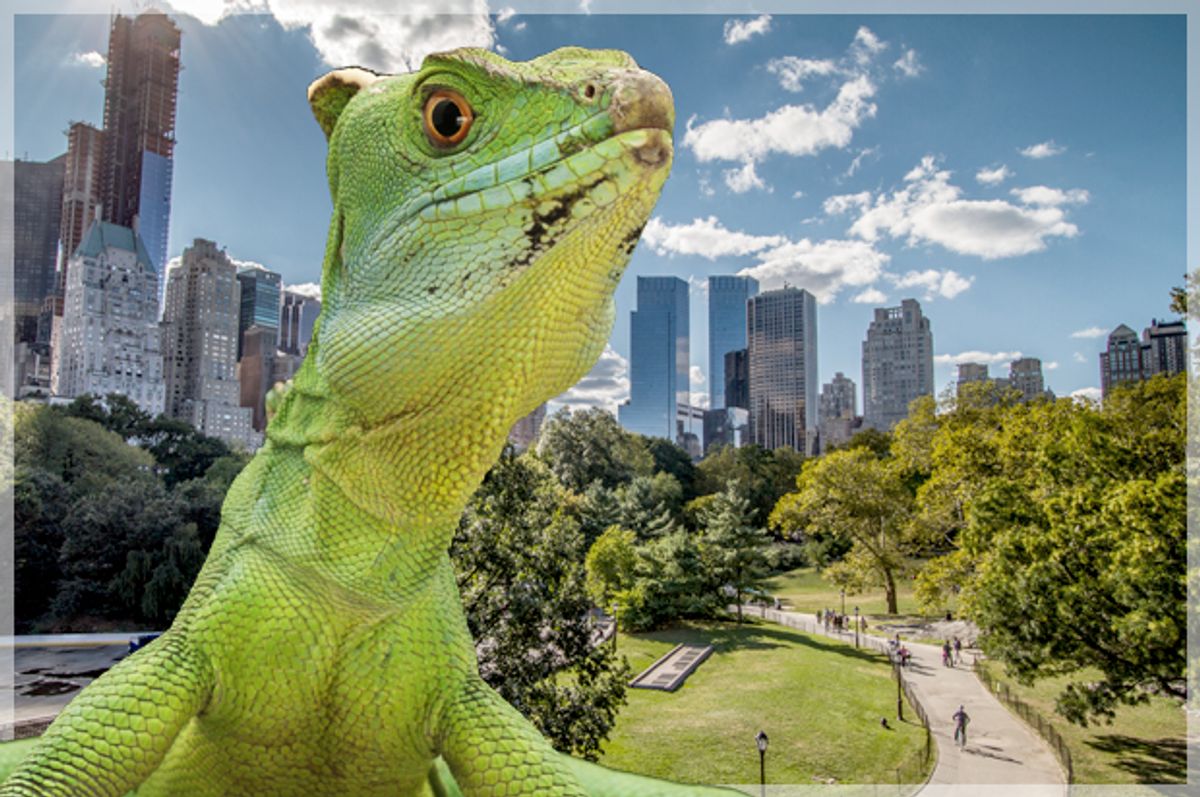 The Internet speaks Meme, a pictorial language derived from the parent tongue of Comics, where images and texts cannot stand by themselves and so require each other. Nowhere is this state of mutual dependency better represented than in two glorious parodies that have sprung up to mock the normalizing niceness of “Humans of New York,” a photoblog that became an Internet sensation by combining photos of New Yorkers with a direct quote from each subject.

The images are dull. The texts are bland. Put them together, however, and ta da! A cultural phenomenon is born.

As photoblogs go, HoNY isn't extraordinary. The images by themselves do not speak a thousand words. They don’t say much at all, except “We was taken by some guy with an iPhone.” Instead, captions provide the stories that the images fail to convey. Each quote offers up harmless, quirky snippets of pathos where the concept is that Life is Good™ is too chirpy for gritty New Yorkers; it’s more like Life is OK and I’m barely getting by--no thanks to you, camera boy.

First, it has to be said that 12 million Americans believe that Lizard People are not only real, but they have infiltrated human ranks to the point where they are running this country. According to the believers, Lizard People preside over the Supreme Court, run Congress and own Wall Street. The only reason a Lizard Person isn’t sitting in the Oval Office right now is because a human somehow twice won the election. But ordinary Lizard People on the street? They still get no respect. “Lizard People of New York” tirelessly rails for Lizard People Equality, republishing photographs from Humans of New York but working from the premise that it’s all a big con, because the photographed “humans” are actually Lizard People.

For example: HoNY shows us a close-up photograph of a pair of sneakers laced up on feet. The HoNY caption reads, in part: “They put me in a mental hospital for two weeks. My dad didn’t talk to me for a month after I came back. When he finally did, he said: ‘Do you have any idea how much your hospital bill cost?’”

The LPoNY caption reads: "One day I'm going to morph into a full person but right now I only feel emotionally ready to be feet."

Not only are LPoNY’s captions far closer to what the photographs actually show than HoNYs short soliloquies, but they expose the normative underpinnings of this quasi-ethnographic effort. By putting new (lizard) words in old (human) mouths, LPoNY shows exactly how HoNY feeds the fantasy of One Human Race as transcendent collective, striving together as if on a neutral plane of equal suckitude for all, effacing the truly troublesome engines of economic oppression and social injustice by focusing on the human detritus and insisting that the mere fact of living on the streets of New York is a special kind of reward.

Therefore, the “Lizard People of New York” project is too subversive for a lucrative book deal, as these rewards only emerge when the book can function as a talismanic object — which is to say, an inoffensive gift suitable to give to your old piano teacher, Mrs. Wozniak, on the occasion of her 90th birthday. However, LPoNY may be coming soon to an experimental online viewing channel near you (view/vote for it here).

By contrast, “Felines of New York” is so new it hasn’t even been covered by BuzzFeed, yet it’s already scored a book deal because it's clever and funny and every fan of “Henri, le Chat Noir,” will want one for their cats to sit on. A pure parody of HoNY, “Felines of New York” started off with the unscientifically proven and absolutely true premise that cats rule the Internet. Therefore cats speaking like the humans featured in “Humans of New York,” i.e., quipping aphoristically about the aporias of urbanites, is guaranteed to win.

“I used to live in a place with another cat, but the lease only allowed one. So for a few years, the two of us were pretending we were the same cat.” — Lolo, Park Slope

“I’m just so bad with names. Like, there’s a guy and a girl that live here. They’ve lived here as long as I have, but for the life of me, I cannot remember what they call each other.” — Felipe, Upper West Side

The quotes and photos are interchangeable, which is part of the joke. And while this all may seem rather silly, HoNY and its most excellent parodies are symptoms of a much larger and significant shift in the terms of populist literacy.

It’s not gone unnoticed that ComicCon has moved from the geek margins to the cultural center in a matter of a few short years, even as the Hollywood film industry basically doesn’t want to produce anything that didn’t start off as a comic book: Superman, Batman, Spider-Man, Ant-Man, Iron Man, X-Men, etc. (Also, it has to have "man" in the title. No ladies or lizard people.)

Some critics worry that the rise of Meme as a popular language merely accelerates America’s measurable slide into illiteracy, with these sorts of images feeding a power structure that uses distraction, amusement and spectacle to placate and control the masses. (The theory is that giggling thwarts critical thinking.) And if popular culture has always played to the lowest common denominator in order to have the broadest appeal, a few months ago, Columbia University accepted the first dissertation written entirely in comic-book form. This is a natural progression, insofar as comic books with literary ambitions, called graphic novels, are now being taught in colleges everywhere, as examples of texts and paratexts and the semiotics of language.

Language is always about control. Images are about information. Over two decades ago, Scott McCloud wrote a brilliant book in comic form called "Understanding Comics," to explain how comics worked; on the other end of the smart-people spectrum, art historian Barbara Stafford’s entire oeuvre continues to interrogate the relationships of images to standardized knowledge.

The last time images dominated popular discourse was in the Middle Ages. Eight hundred years ago, nearly everyone was illiterate—perfectly unable to read, write and draw--except the ruling class, i.e., the 1 percent, which told the people what to think. Wherefore novelist Victor Hugo declared that “this will kill that,” in "The Hunchback of Notre Dame," 1831. This was the printed word. That was architecture.

The architecture in question was Gothic, a medieval style of building summed up by gloomy gargoyles telling stories with their bodies. Hugo correctly predicted that the advent of mass printing would kill the public’s ability to read these three-dimensional tales. In place of reading stories told in stone, people would be sticking their noses inside cheap portable books, so fascinated by squashed bug-like symbols called “words” that they’d become oblivious to the weighty world around them.

Progress being progress, it is now time for printed books to stare down their doom, forced to eat digital words as their last ironic meal. For what has risen in place of printed text is a hybrid language of words & images, whizzing through cyberspace where the masses look for cool stuff to read. Sony is even building a movie franchise around emoji.

Today, what HoNY and its parodies reveal is that meaning is never pure: It is up to us to see the manipulation, by looking at the evidence instead of blindly believing what we’re being told. Seeing, in other words, like a lizard person.