Here's why you're taking the tragic Bennifer break-up so personally 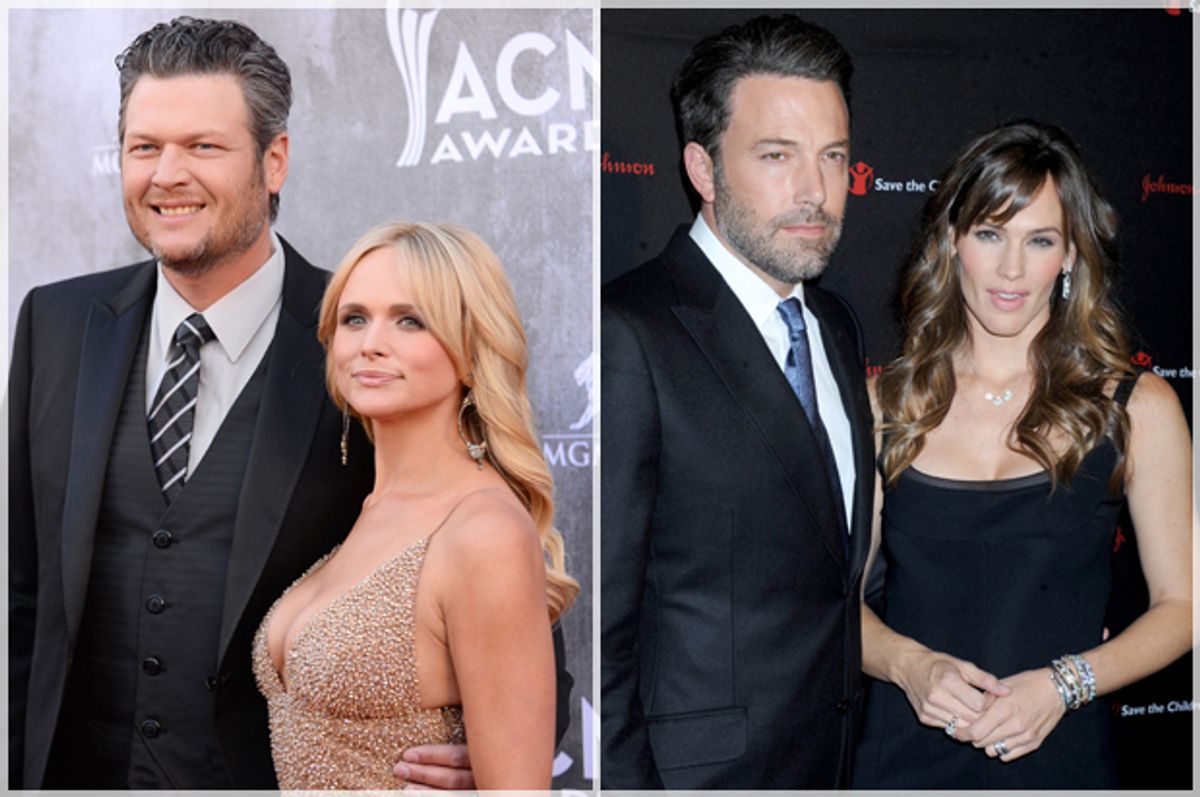 The cascade of celebrity breakups has been coming for as long as there have been celebrities, and media coverage has only increased over time. Most recently, we've learned of the impending divorces of actors Ben Affleck and Jennifer Garner, who wed in  2005, just before the announcement of the marital implosion of country singers Blake Shelton and Miranda Lambert, married since 2011.

But why do we care about the marriages of people we don't really know?

We asked cognitive psychologist Art Markman, a professor at the University of Texas at Austin, author of the book "Smart Thinking," and podcaster ("Two Guys on Your Head") about the phenomenon. The interview has been slightly edited and condensed.

Let's start with the central issue: Why do so many people care about the private lives of Affleck, Garner and these other people most of us have never met?

Well, we care about celebrities, in general, because they live lives that are bigger than most of ours -- they have access to all sorts of things we'd never have access to. This has been true since forever: The aristocrats in Elizabethan England were a source of fascination, the court in France.... People have always been fascinated by people who live glamorous lives.

And all of the things that happen in people's private lives happen in the lives of the rich and famous: People fall in love, they fall out of love, they hurt each other, they cheat on each other. And when it happens to your friends, you can't derive any enjoyment from it. You're too busy consoling them, or helping out. And so as exciting as the drama might be, you're caught up in it in a direct way.

The fact that we don't know these celebrities, then, gives us room to respond in ways we couldn't if it was happening to our best friend or our sister or something.

That's right -- we can have reactions that would be utterly inappropriate if our brother broke up with a wife you'd never liked. When a celebrity is caught doing something inappropriate... you're allowed to have the whole reaction. It gives you license. Not that that's nice -- but it's human.

When you read interviews with celebrities, they talk about how people have trouble separating their public face from their private face.

Right -- let's talk about how that's changing. Our fascination goes back hundreds of years. But does this work out differently in the era of reality TV and constant media coverage -- when it seems like everyone's life is a performance, when celebrities, and the rest of us, have less and less privacy?

I think the modern era has created more immediate access to things than we could ever expect. You can get images of celebrities doing bad things tweeted in real time to you. The stories of the aristocracy in 18th century France may've taken weeks to dribble down to you.

And that immediacy means that people expect responses to be immediate: People expect immediate damage control. Anyone who's been through a divorce knows that these are events that play out over weeks and months, and sometimes years, and knows that to expect immediate [public] reactions out of the participants creates a real tension that is unsustainable. No matter how many times celebrities say, "Please give us space and respect for the family," that's just not the way a news cycle works.

A divorce is the flip side -- the undoing -- of a wedding and marriage. How do we respond to those? Do we see an idealized version of ourselves when celebrities tie the knot?

It's a spectacle, right? Beautiful people getting married is a spectacle. And just as we swoon at the end of the romantic comedy when the "right" pair gets together -- and remember, every romantic comedy ends with a kiss because no one wants to see them arguing over who does the dishes.

Real life isn't always so much fun — just as Season 3 of "House of Cards" isn't much fun, because it's more fun getting to the presidency than actually governing.

Weddings are fantasies for just about everyone. And most of us don't get to have a half-million-dollar wedding in Bermuda, with, you know, Radiohead playing, or whatever. So when that sort of thing happens, you pay attention.

Divorce these days tend to skew toward couples who are poorer and less educated. But at the very top, it changes back: Why do movie and TV stars -- and famous musicians -- get divorced so much more rapidly than the rest of us? You'd think money would help.

Their lives have more temptation in them. Most of us don't live lives in which anyone but our spouse would be interested in sleeping with us. So that availability, for men and women at the highest level of celebrity, that constant temptation, combined with long periods of time when you're not together, creates an environment very different from those that the rest of us live in. It's no surprise that people give in to their biology. It's not a recipe for great long-term relationships, in a society that prizes monogamy.

Many celebrities get involved in long-term relationships, and have kids. And kids are a stressor in every relationship. We know that from any studies of well-being and marriage.

Couples don't tend to have an equitable division of household responsibilities -- that creates tension in the best of circumstances.

There are people -- I won't name any names -- who don't much care about celebrity divorces. They're surely the minority. Is there something wrong with them?

There are different reasons why people may not pay attention. Some are probably better or worse than other.

Some people just don't care about other people -- they might not be so empathetic if their brother got divorced. That's probably not so good. But there are other people who don't worship at the altar of celebrity.

But I think there are a lot of people who don't want to admit that they care. We make a distinction between high and low culture -- people may not want to admit they are sneaking a peek at Us Weekly.

There are different domains in which we care about stuff. You might not care about Ben Affleck, but you took pleasure or pain hearing about Tiger Woods being chased through his yard with a seven iron or whatever. Even in politics -- the nation was riveted by the Monica Lewinsky scandal.

If you think about the arts in general -- what do we read about, what do we go to plays about, what is opera about and music about? They're about relationships -- the creation and dissolution of relationships. It's so much a part of our collective culture. That is the stuff we care deeply about -- for whatever set of reasons. They're getting at something deeply fundamental to people's psychology.