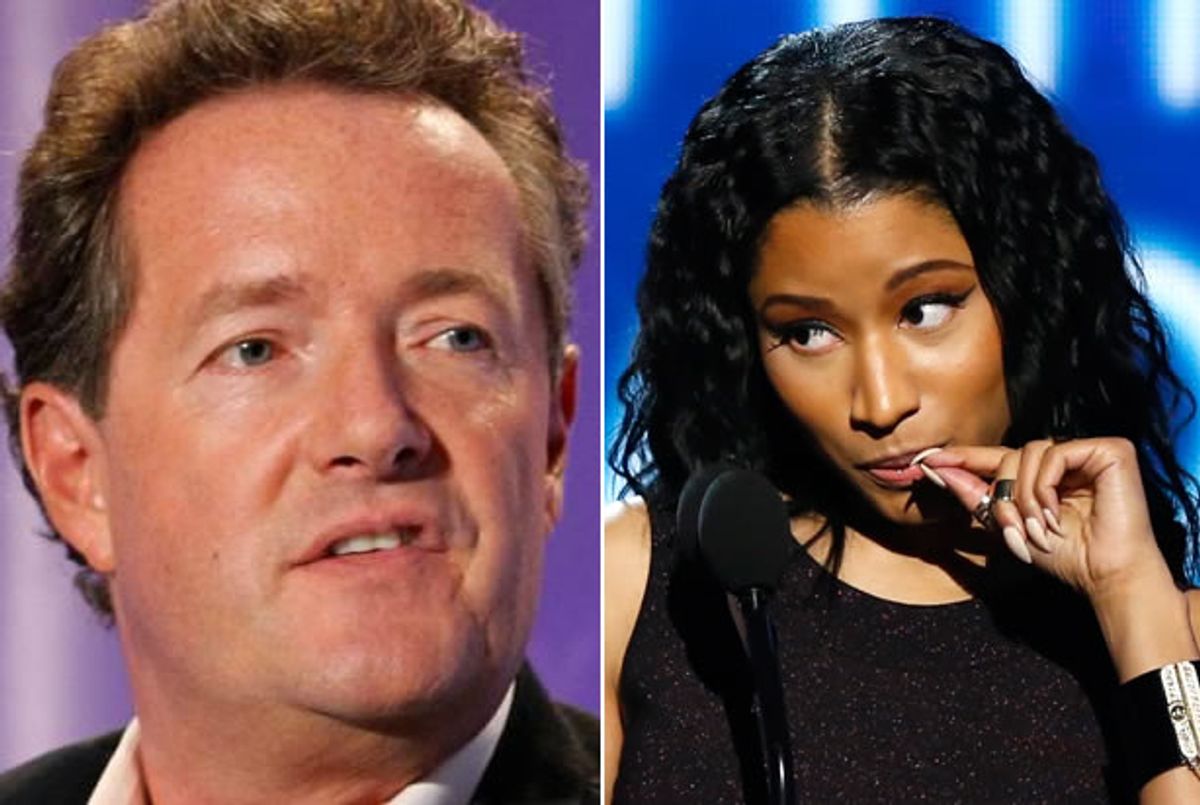 Morgan did not disappoint, penning a screed in which he scolded "stroppy little piece of work" Nikki Minaj -- as well as what he called "Black Twitter" -- for daring to criticize the nominees for the MTV Video Music Awards. To quickly recount the origin of his outrage, it began with this tweet by Minaj:

Taylor Swift took offense at this remark, replying to Minaj as if it had been aimed at her personally:

To which Minaj politely replied that she stop considering it a personal insult and use her platform as a means to criticize institutional racism and sexism:

To Morgan's mind, Minaj's calmly worded request that Swift investigate the racism and sexism inherent in the system required a white knight to rush her defense -- and who's whiter or more anachronistic than him?

Putting aside the obvious problems with Morgan's rambling essay -- that every "paragraph" is only one sentence long; or that he makes it about himself, recalling a time in which Minaj denied his request for a photograph; or that he characterizes a tweet that literally contains 14 smiley faces as "raging" -- the piece's most striking quality is its deliberate and defiant tone deafness.

The day after dashcam footage of Sandra Bland's increasingly dubious looking arrest was released, Morgan is boasting about having tweeted "#ALLLivesMatter" and chastising "Black Twitter," which he describes as "a very large, vocal and aggressive social media group of mainly black Americans who collectively leap on any perceived racial insult or bias to expel their indignation."

Morgan suggests that distinctive black voices matter about as much as individual black lives -- and that neither are as important as Taylor Swift. "I have every sympathy with Taylor, who did absolutely nothing wrong," he wrote. "And I have no sympathy with Nicki Minaj, who emerges as a whiny brat that just doesn’t like losing. Her charges of racism and big-bodyism are frankly laughable when you consider that three of the five nominations for Video of the Year are black artists."

The problem with Morgan's argument is obvious enough, but it warrants repeating explicitly -- he's reduced the nominees to their skin color and suggested that all of them have the same build as Nicki Minaj, because of course all black women look alike when you're committed to seeing them as enraged horde instead of, for example, individual people.

He can claim that he doesn't hold this "opinion because I'm white," and he's half-correct -- it's because he's not particularly intelligent and white that he's incapable of understanding what's so problematic with his statements. An intelligent person wouldn't relegate industry racism to the history, as Morgan did when he said that "in the past, the music industry was, like Hollywood, rife with racism[.]"

Nor would a such a person claim that Minaj "play[ed] the race card just because her video didn’t get the nomination she wanted is a cheap piece of faux outrage deliberately designed to stir up unnecessary racial tension where it shouldn’t exist."

Of course, a thinking person wouldn't tweet with pride that he was writing something that would infuriate "Black Twitter" -- and if you listen closely, you can almost hear him squealing with glee as he composed that tweet. That's not a feeling someone as profoundly opposed to racism as Morgan professes to be would ever feel, and that's something he doesn't seem to realize.