Wall Street is freaking out about China's economic slowdown: Here's why humanity should cheer 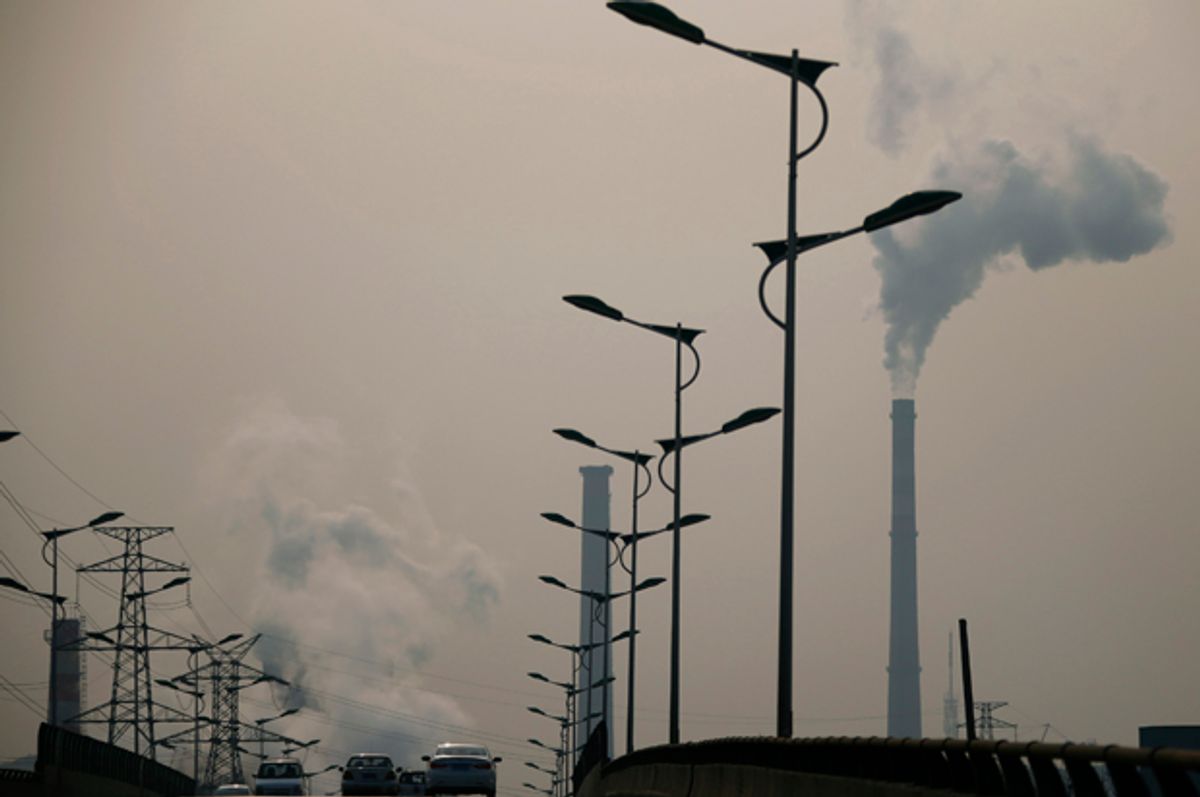 Smoke rises from chimneys of a steel plant next to a viaduct on a hazy day in Tangshan, Hebei province February 18, 2014. (Reuters/Petar Kujundzic)
--

While Wall Street might bemoan the economic slowdown in China, the rest of the humans living on planet Earth should cheer.

For years now, global capitalism has banked on massive year-over-year annual growth rates from China, which has had the dubious distinction of producing half of the world’s goods without any regard for the impact of that production on its land, air, water and, tragically, its people. But there are hopeful signs that a grass-roots movement in China, largely kept out of view from the rest of the world, is challenging the central government to improve the country’s environmental quality. For years, China’s central planners paid only lip service to downshifting their massive economy to a more sustainable gear, but riots in the streets over environmental issues appear to be producing some tangible results inside the country. Last month, China committed to reducing its killer carbon footprint over the next 15 years.

While here in the U.S. our climate change deniers sow the seeds of doubt, the actual body count continues to mount in China from premature deaths and chronic illness, attributable to pollution so out of control the Chinese are speaking up and taking direct action, putting themselves and their families at risk of political persecution in the process. A recent international poll taken by the Pew Research Center indicated that 33 percent of the Chinese surveyed thought that pollution was the most significant threat to humanity, while just 15 percent of Americans polled felt that way.

The stakes are high for China, and for the planet. Consider that a 2013 Peking University public health study commissioned by Greenpeace documented that 250,000 people in China would face premature death annually due to the prevalence of high levels of particulate matter in the air, most often generated by burning coal. The World Health Organization says concentrations of these particulates in excess of 10 micrograms per cubic meter of air should be classified as hazardous. China’s most polluted cities are in the 140s and 150s per cubic meter, seven times the levels found in the U.S.’s most smog-prone cities like Los Angles and Bakersfield, California. In fact, in many Chinese cities, outdoor pollution kills more people annually than smoking-related diseases.

“What you need to understand about China is that the environmental issue is on everyone’s mind from the top to the bottom,” says Peter Kwong, an author and a distinguished professor at the City of New York University’s Hunter College. Kwong says that cases of product contamination helped to spark skepticism about official pronouncements on product safety, and by extension, the government’s environmental claims. “Babies' milk, water and basic essential items like that were not regulated and business people would take advantage of that and sell consumers crap. The Chinese people saw this and started to hold the government accountable. Now there is so much widespread unhappiness about the environment it has pressured the government to do more than ever before.”

Kwong was one of the producers of the 2010 HBO documentary "Unnatural Disaster: The Tears of Sichuan Province." The Oscar-nominated film chronicled the response of a region that lost 10,000 children in 2008, when an earthquake caused poorly constructed schools to collapse. “What was unusual was that these community protests were caught on Western tape,” says Kwong.

As far back as 2007, thousands of protesters in the the coastal city of Xiamen hit the streets to protest a paraxylene plant in such numbers that officials agreed to move the facility that makes the chemical stock for polyester and plastics somewhere else. Officials moved the facility more than 60 miles away, onto the Gulei Peninsula, where it suffered massive explosions in 2012 and 2015, which in turn prompted even more pushback from locals fed up with the government’s glossing over the environmental impacts from the fires.

For all of its modern infrastructure, China is struggling with the basics like having sufficient potable water. With chronic water shortages in much of the country, and a legacy of unregulated toxic discharges, China is having to turn to costly desalination plants. As reported by Christina Larson in Yale Environment 360, China has 20 percent of the world’s population but just 7 percent of its available freshwater. Last year Chinese officials disclosed that 60 percent of China’s sub-surface waters were contaminated.

Yet even as environmental issues find their way to the top of the domestic agenda, China’s global trading footprint continues to expand all over the world. Whether it be pursuing oil in the Amazon or bauxite in Africa, the carbon footprint of these Chinese transnational enterprises require every bit as much scrutiny as the ambient air quality in Beijing.

No doubt  Wall Street will try and cast aspersions on a Chinese economy that does not grow to meet their greedy expectations. But for the people of the world a Chinese reset will provide a breather the entire planet needs.