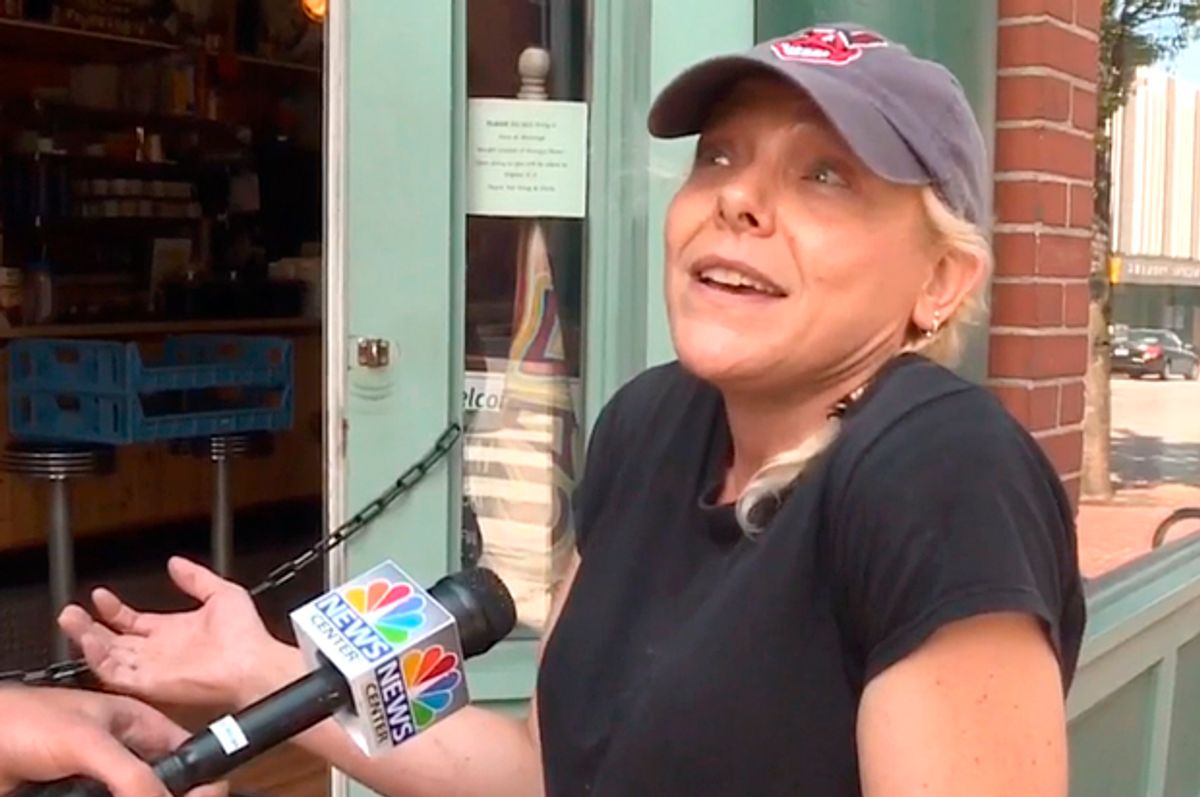 The lifespan of an Internet hero is short indeed. Remember Tuesday? Back then, Darla Neugebauer, the owner of Marcy's Diner in Portland, was being roundly praised for bravely yelling at a toddler. Well, that seems to have turned.

Neugebauer and her establishment were thrust into the spotlight earlier this week when a customer complained on Facebook that "The owner is an absolute lunatic and screamed in the face of my almost 2 year old child bc she was crying. Who in their right mind would behave like this unless you are deranged." Neugebauer, unafraid to get into it, swiftly doubled down, explaining somewhat confusingly, "F__k you! And guess what? She shut the f__k up after I yelled from 5 feet away! I was in your stupid husband’s face I was in!… Good luck lady with that monster! Good thing I thrive on hate!" The action — and Neugebauer's tough warning that "being physical is not something I cower from" — quickly won a legion of new fans. Commenters flocked to the diner's Facebook page to cheer, "Good for her. When I pay to go to a place to eat I don't want to hear some kid screaming. More should do what she did." Basking in her new glory, Neugebauer told local media she "might be a local hero." And the backlash starts in three, two, one…

First, Tara Carson, the mother of the 21-month-old Neugebauer berated, shot back with her dramatic version of how it went down that fateful, pancake-fueled morning, in a Washington Post piece in which she described "the fury" in Neugebauer's eyes and vowed, "I'll never forget the look of fear on my baby's face." Then a group of mothers threatened to -- and then decided against --  doing a protest "Mama and Baby Pancake Breakfast" at the location.

Meanwhile, on Wednesday, city officials announced plans to inspect the site because, as the Portland Press Herald reports, "It has been sent images that purport to depict a Facebook message exchange between the restaurant and an unnamed person, in which the restaurant threatened to spit in the food of patrons who brought kids…. The city confirmed that it had been sent the same screen-captured exchange and at least one other." In one screenshot, "Marcy's Diner" allegedly tells a patron, "Like who the f__k lets there [sic] retarded child cry?" Neugebauer denies making the spit threat, and added on social media, "Please stop with the phone calls and nasty posts." Indeed, while she's still getting support for her stance, others have been coming to the diner's FB page with allegations of rude behavior and calling her "one psycho in general" and saying, "That woman is a crazy and a wacko."

Internet justice is often swift, strong and wildly out of proportion to the alleged offense. For a moment it lashed in the direction of the supposed selfish parents and their "monster." Who is not yet two, can we keep pointing that out? Now it appears to be swinging in the other direction, toward the woman who yelled at said toddler. Here's a crazy thought — what about not overreacting? Parents have an obligation to be considerate of the people around them when they're out with their kids, and to act as quickly as is reasonably possible when the kids are being fussy. Business owners are entitled to ask patrons to leave. Beyond that, I'd say applauding for and encouraging meltdowns on any side is a huge waste of time. You don't have to physically threaten the people who come into your establishment, and likewise, trolls of Facebook and beyond, you don't have to harass people because they've done something you disagree with. You don't have assess their mental health, you don't have to call their business to give them a piece of your mind. You don't!

Neugebauer is not a hero anywhere but possibly her own head. She doesn't deserve to be harassed, either. Life doesn't have to be a telenovela. And in the rapid, capricious world of viral Internet fame, she's gone from lauded to excoriated in a little more time than it takes to get an order at Chipotle. At this rate, her comeback is scheduled for sometime around dusk.