"Southpaw": A gripping, conflicted fable of a white champ in an imagined America 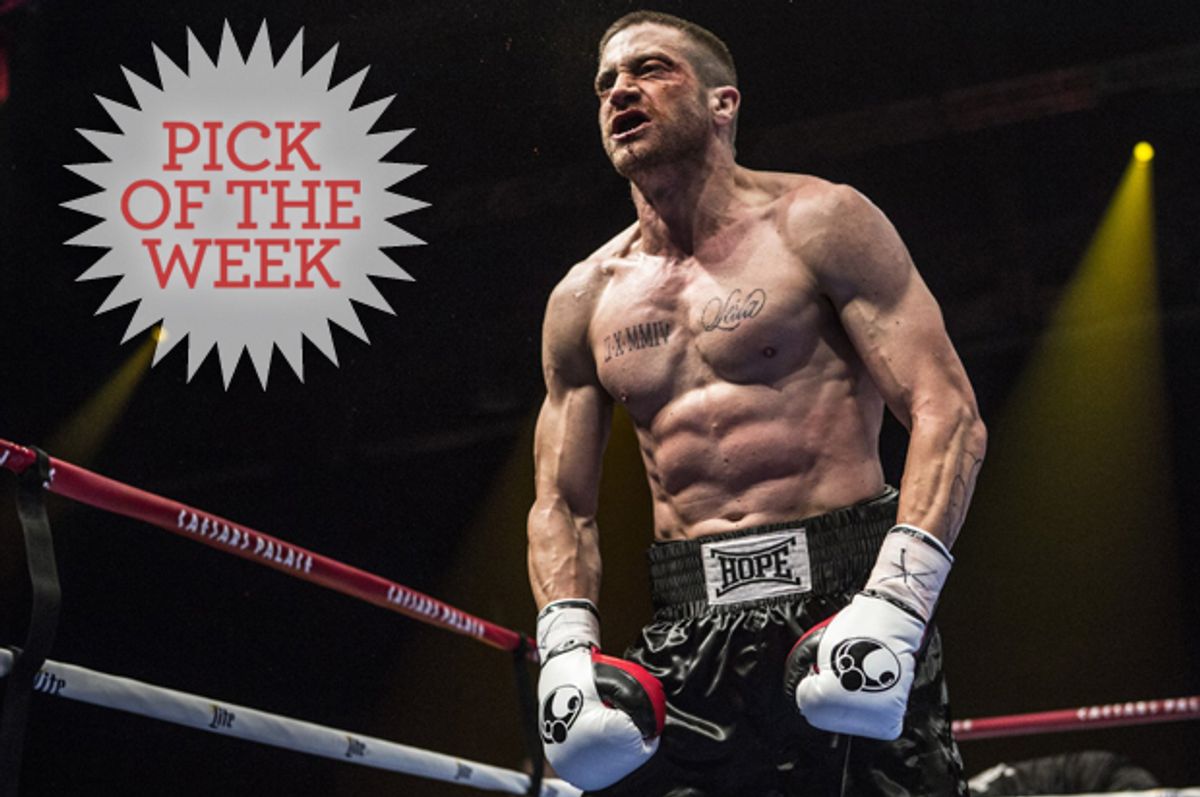 I’ve been conducting a running argument with myself about director Antoine Fuqua’s “Southpaw,” a near-classic boxing drama set in a mythological alternate-universe version of America that features a magnificent physical performance by Jake Gyllenhaal as a disgraced champ who has lost it all and must fight his way back to the top. Wait, what did I just say? You didn’t know “Southpaw” was an alternate-universe story, did you? Well, I’m not sure the people who made it know that either, or at least they might not put it quite that way. This marks the first Hollywood screenplay for Kurt Sutter, creator of the biker-gang series “Sons of Anarchy,” another heightened macho melodrama that shouldn’t necessarily be taken as realistic. Both of Sutter’s guy-centric fantasy worlds pose approximately the same problem: Is this a redemptive vision of human possibility, or just an exercise in mendacious masculine ego-stroking?

On a moral level, I’m pretty sure the answer is “some of both” or “it depends,” which is frustrating. If we move to the technical level, “Southpaw” is a tremendous accomplishment of mainstream cinematic craft, a near-perfect match of director, material and star. Even amid the abundant ridiculousness of “Sons of Anarchy,” Sutter’s storytelling skill was always evident, and despite the narrative obviousness of “Southpaw” I was pretty much on the edge of my seat from beginning to end. For Fuqua, who has been kicking around the action-adventure fringes of Hollywood since his breakout with “Training Day” in 2001, this movie feels like the fulfillment of his enormous potential, the cornball pulp demi-masterpiece he’s been threatening to make all along. (I’m more than happy to defend “The Equalizer,” Fuqua’s surprise hit from last summer. We can discuss “Olympus Has Fallen” and “Shooter” some other time.)

I’ve described Fuqua before as a younger, African-American cognate to Martin Scorsese, and I don’t mean that as a dismissal or a joke. Both directors display enormous technical talent and profound passion for cinema, and both have built their careers on long-term collaborations with first-rate cinematographers: Scorsese with Michael Ballhaus and Robert Richardson, Fuqua with Mauro Fiore. Both are also given to pursuing grandiose fables of agonized American manhood, and sometimes find themselves fighting uphill battles against mediocre material. If it’s also obvious that one of them has had a much more illustrious career and achieved far more power and independence than the other, let’s just say that many factors are involved in that. We don’t have to argue that Fuqua is as good as Scorsese to see that his career has been impeded by Hollywood’s deeply ingrained racial attitudes.

“Southpaw” will probably be more popular with audiences than with critics, perhaps because it’s so deliberately and conspicuously old-fashioned. Despite its apparent mode of gritty 21st-century realism – which includes some of the most brutal and convincing simulated fight scenes in Hollywood history -- at heart this is a boxing flick drawn from the way-back era before “Raging Bull” and even before “Rocky.” With a few superficial details adjusted, “Southpaw’s” mythic tale of fall and redemption could be set in 1965, or 1935.

But those superficial details are important, including the fact that this is a movie about a white fighter in an overwhelmingly black and Latino sport, made by a black director and a white writer. No one in “Southpaw” ever directly mentions the race of riches-to-rags light-heavyweight champ Billy Hope (Gyllenhaal), either as a cultural anomaly or a marketing bonanza, although it is clearly both. But even Billy’s surname is an unsubtle reference to the ancient racist boxing trope of the Great White Hope, the wholesome and immensely marketable American hero who will rescue the sport from irredeemable blackness. The cultural history of the Great White Hope goes clear back to Jack Johnson’s fights against white challengers Jim Jeffries and Jess Willard more than a century ago. But as Sutter and Fuqua are both old enough to remember, it endured into the 1980s, when it poisoned the career of heavyweight contender Gerry Cooney, a decent man who never wanted to carry that racial baggage.

When I say that “Southpaw” takes place in an alternate version of American reality, I don’t just mean that its hero is a hard-scrabble white ethnic kid who was raised in an orphanage in Hell’s Kitchen, on the western edge of midtown Manhattan. That romantic Palookaville scenario grows less plausible by the second: The last pockets of working-class whites departed Hell’s Kitchen in the Giuliani era, and the neighborhood has been entirely colonized by fashionable gay couples and hard-partying financial-sector dudes. But if we assume that Billy was born there in the mid-‘80s, and mix in a little suspension of disbelief then, sure, it’s possible.

Sutter’s fictional universe is imaginary on a more basic level, even beyond its pre-gentrified, “Dark Knight”-style portrayal of New York City. “Southpaw” presents boxing as a huge, headline-dominating enterprise in 2015 – roughly the way it was three or four decades ago – instead of a disreputable cultural sideshow associated with widespread corruption, criminal misbehavior and permanent brain damage. (How many Americans could name a heavyweight champion more recent than Mike Tyson?) Within that fiction, Sutter builds an if/then parable: If boxing were still that big, then we might get a white champion from a storybook background whose race was not seen as important, and who might be brought down by an unscrupulous black promoter (Curtis “50 Cent” Jackson, in an impressive array of vintage Americana suits) and then rescued and rebuilt by a hardass black trainer (the always watchable Forest Whitaker).

It’s tempting to leap to the conclusion that “Southpaw” was constructed to appeal to the half-conscious desires or prejudices of white audiences, to the hopeful or naive idea that race does not matter or should not matter, or at least might not matter if we worked at it hard enough. But I think it’s overly reductive to assume that only white people are vulnerable to such a vision (which was articulated more clearly by Martin Luther King Jr. than by any other American), and anyway that’s writing Fuqua out of the picture way too much. Like any Hollywood director below the top tier, Fuqua is a collaborator in an elaborate bureaucratic enterprise rather than an auteur, but most of his films (and all the good ones) have been ambiguous fables of black-white conflict and cooperation, in which an environment of apparent racial blindness and racial equality masks a deeper and more anguished reality.

If that is captured most vividly by the famous scene in “Training Day” where Denzel Washington convinces Ethan Hawke to smoke crack (partly by addressing him with the N-word), similar moments of tension recur in almost every Fuqua movie – sometimes by omission, as in “The Equalizer,” where the race of Washington’s superhuman avenger (a character originally written as white) is never mentioned. After punch-drunk Billy Hope has lost his wife (a brief but striking part for Rachel McAdams), his championship, his daughter, his grandiose suburban manse and all his cars and money and bling, he finds himself in a bar with Tick Wills, the grouchy, ursine boxing lifer played by Whitaker, in the middle of a Bronx neighborhood where (if this were reality) Billy would pretty much be the only white person under age 90. “What happened to your eye?” Billy asks, midway through their scene of monosyllabic male bonding. Tick smiles in a way that might be mischievous or might be something else, and whispers, “Blue-eyed devil took my eye.”

That scene struck me as closer to the secret heart of “Southpaw” than all the exciting fight footage or the boilerplate story of Billy’s relationship with the unctuous promoter Jordan Mains (50 Cent) and his cocksure, trash-talking and possibly more talented nemesis, Miguel “Magic” Escobar (Miguel Gomez). If this movie connects with audiences, of course it does so first and foremost as a visual and visceral spectacle, an old-school inspirational yarn about a damaged, violent man struggling to outgrow his self-destructive anger. But as is almost always true with the best American genre films, below that obvious level much of its power comes from a subtler, darker place.