How many Americans must die before we rethink the Second Amendment? 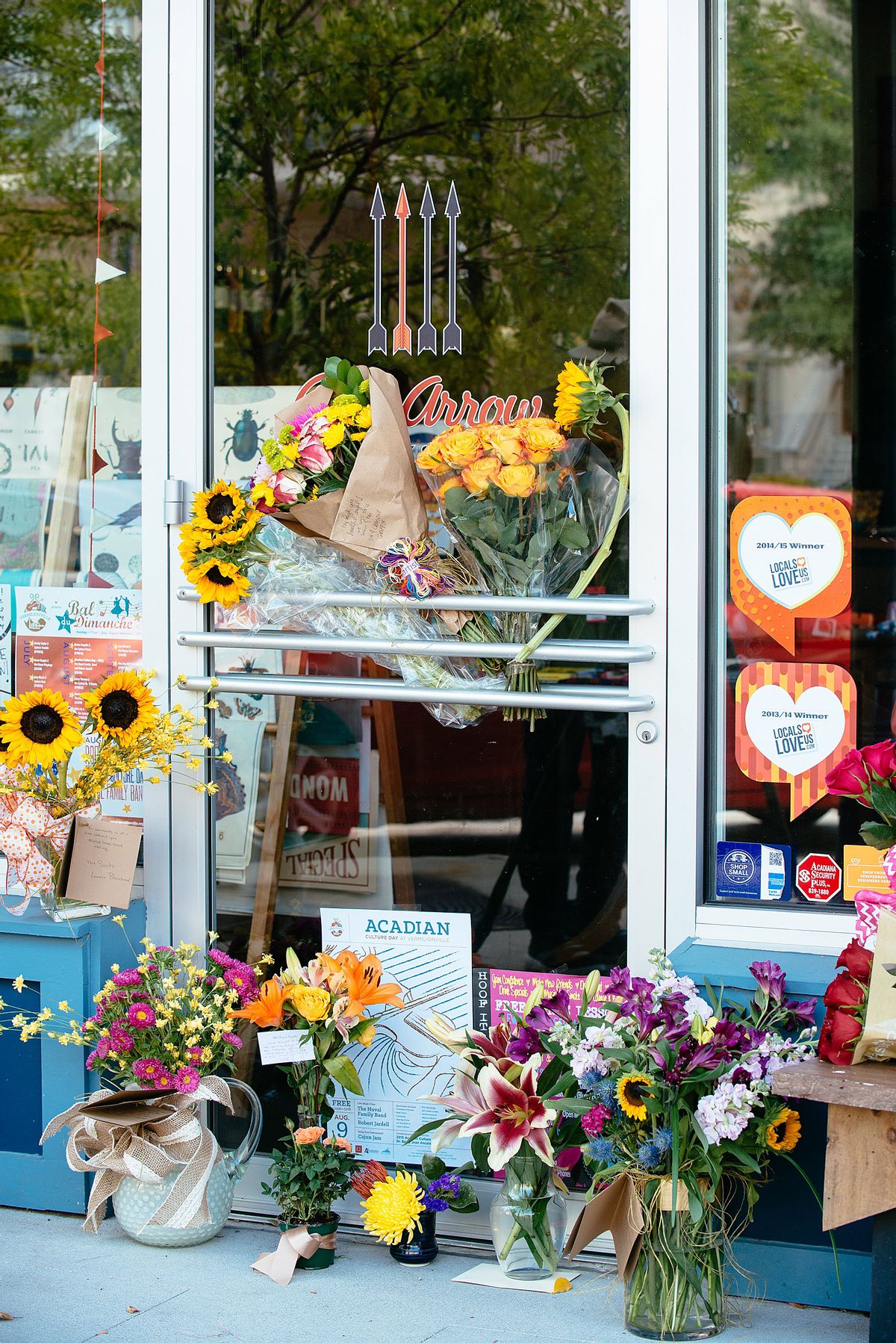 A small memorial is shown outside of the Red Arrow business for the owner Jillian Johnson, a victim of the the movie theater shooting, in Lafayette, La. on Friday, July 24, 2015 Johnson was one of two women killed in an attack in Lafayette Thursday night. John Russel Houser, 59, stood up about 20 minutes into a movie and fired first at two people sitting in front of him, then aimed his handgun at others, firing at least 13 times, police said Friday. (AP Photo/Denny Culbert) (Denny Culbert)
--

There was another mass shooting in America last night – this time in my home state of Louisiana. John Houser, a drifter from Alabama, walked into a crowded theatre in Lafayette, Louisiana, and unloaded 13 rounds. We don’t yet know why this theatre and this man, but we know this: two innocent people are dead because they were shot in the dark by a stranger.

A sickness has swept over our country: angry men with guns are discharging their nihilism on our children, our neighbors, our churches, and our communities. And we won’t do a damn thing about it. We know this because what happened in Lafayette last night has already happened in Chattanooga, in Charleston, in Aurora, in Washington D.C., in Connecticut, in Texas, in Virginia, and on and on and on.

Nothing changes. Some bodies are filled with holes, politicians and the media descend, the news cycle passes, and we carry on. Our streets are studded with guns and no one is willing to do anything about it. We’re told in the aftermath of these events that politics is in bad taste; that we ought simply to offer prayers to the victims. Such was the reaction of our absentee governor, Bobby Jindal, who reminded us that “Now is the time for prayer, now is the time for healing. As far as the political spectrum, this isn’t the time.” Now is precisely the time for action – as it always is when mass shootings occur.

People don’t need prayers, governor; they need to live without fear of being shot. They need sane gun laws. But we can’t have an honest conversation about guns because the NRA and cowards like Jindal (who opposes restrictions on gun purchases and whose state leads the nation in gun deaths) won’t let us. As Bob Mann noted in the Times-Picayune this morning, after the massacre in Charleston, Jindal attacked Obama for suggesting that a national discussion about guns is needed: “I think it was completely shameful,” Jindal said, “Within 24 hours we’ve got the president trying to score cheap political points.” There’s nothing “cheap” about addressing gun laws after nine people were gunned down in a church. The same is true in the wake of the Lafayette shooting. But reflexive posturing of this kind occurs every time something like this happens.

The Second Amendment fanatics will surely remind us that guns are quintessentially American. That’s true, of course: the Second Amendment exists. But that’s not the end of the conversation. That something is written in the constitution doesn’t mean it’s sacrosanct. The document, after all, enshrined slavery and denied full personhood to black people. At any rate, contrary to the disastrous Supreme Court ruling in 2008, the Second Amendment protects militias, not the individual’s right to carry a pistol in a supermarket or a theatre. It wasn’t until the NRA bought the Republican Party (Jindal included) and began pushing for a reinterpretation of the amendment that it came to mean something other than it does.

I respect the rights of hunters to hunt and the need for self-defense is very real, but we’ve got to be honest about the costs of allowing so many guns on the street. The NRA says the “only thing that stops a bad guy with a gun is a good guy with a gun,” and that’s not as stupid as some suggest, but perhaps more laws and fewer guns is even better. And the people who say we can’t get rid of guns are lying or ignorant or both. In Australia, a country governed by adults, radical new gun laws were imposed after a mass shooting, which included a mandatory buy-back program. The laws, by any measure, were atremendous success. It’s possible to do something about guns, in other words – difficult, but possible.

The fervor with which Americans defend guns feels pathological at this point. In what other developed country are people so obsessed with guns? In what other developed country do you need a pistol in your pocket to feel safe? What is it about America that we can’t get on without being awash with guns? There’s this notion that somehow freedom will be extinguished if we can’t get our hands on a gun. Do the idiots in the Michigan Militia really believe they’re going to beat back the U.S. military should it decide to invade Detroit? This is the stuff of deranged fantasies, believed by culturally isolated Guns & Ammo readers.

Much will be said of the Lafayette shooter’s background in the coming days. It’s already been reported, for instance, that he was a member of the Tea Party. I’ll leave it to others to speculate about that. Whatever the ideology of the shooter turns out to be, the fact remains: There will always be terrible people willing to do terrible things in defense of terrible ideas. Why not make it more difficult for them to access a gun? Why not do everything possible to reduce the number of guns on the street?

How many people have to die before we decide blind allegiance to a misinterpreted amendment isn’t worth the cost?