We've lost the gun debate: Our relationship with guns is dysfunctional, and we won't do a thing about it

The Lafayette shooting stirs up another argument about guns -- and it'll go nowhere, again 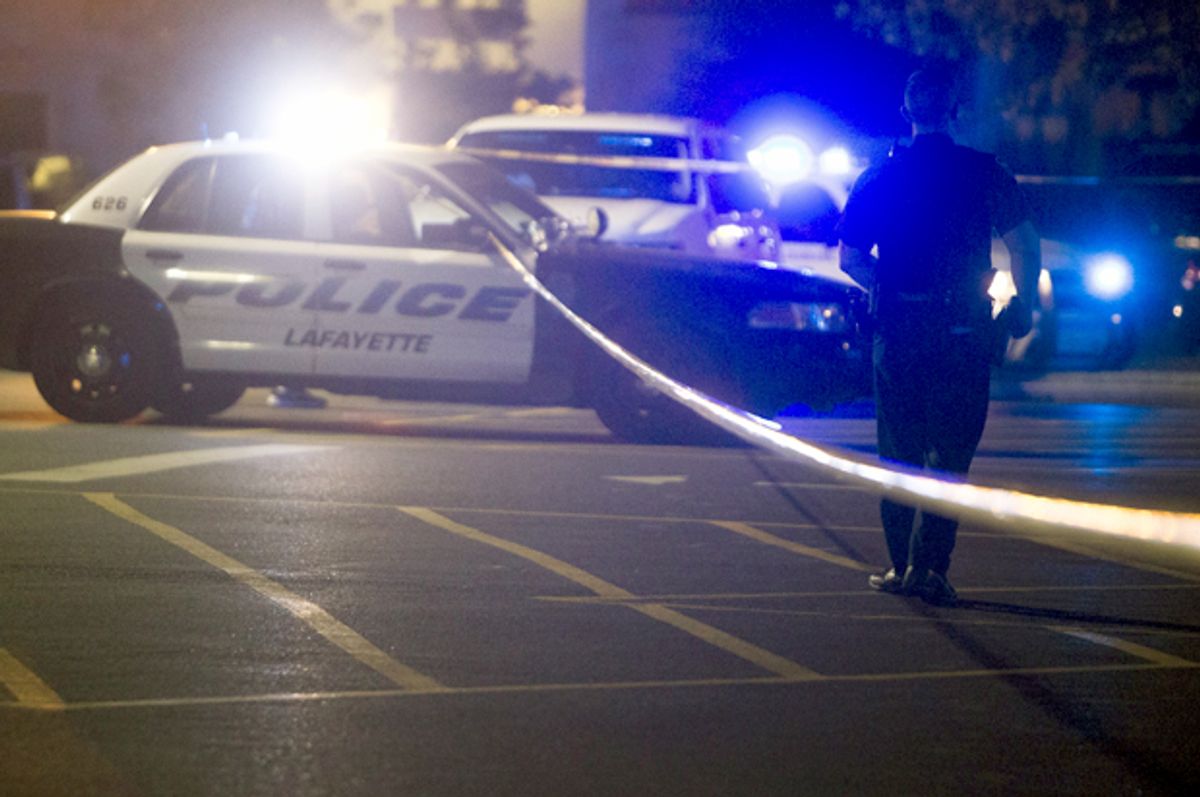 Police stand by at the scene outside the movie theatre where a man opened fire on film goers in Lafayette, Louisiana July 23, 2015. (Reuters/Lee Celano)
--

It's a familiar, demoralizing American tradition by now. Person (usually white, almost always male) with a gun opens fire in a church, in an elementary school, near a college campus, in a movie theater. People die. And then, we have a very public circular debate about guns in which nothing actually changes. We went through this a month ago. A month ago. And then it happens all over again.

In Lafayette, Louisiana Thursday night, a man identified as 59-year-old John Russel Houser stood up and fired "at least 13 rounds" into a movie theater audience as the lights dimmed for a showing of "Trainwreck." Two women were killed and nine other individuals were wounded — including one who is still listed in critical condition — before Houser turned the gun on himself. Col. Michael Edmonson of the Louisiana State Police told CNN Thursday, "There's nothing to believe that there was any kind of motive." In cases of mass violence, the answer to "Why?" may never fully be understood — though  you can often find some deeply rooted misogyny and racism. But the "How?" of these is often much more clearcut. He had the weapons.

Early reports describe Houser as a "drifter" from Alabama who arrived in Louisiana earlier this month. Funnily enough, the Law Center to Prevent Gun Violence gives Alabama an F ranking thanks to its relaxed firearms regulation. And, significantly, it notes, "In 2009 Alabama ranked fifth among the states in the rate of crime gun exports – guns originally purchased in that state that were recovered after being used in a crime in another state. Alabama exports crime guns at a rate that is more than double the national average, and more than double the rate at which it imports crime guns from other states." In other words, if you want to commit a gun crime in another state, like Louisiana, Alabama happens to make a pretty good first stop.

It similarly gives Louisiana an F for its lax laws, and also says, "In 2010, Louisiana had the second highest number of gun deaths per capita among the states." On the plus side, just three days ago, Guns & Ammo honored Alabama with an impressive seventh place in its ranking of Best States for Gun Owners, boasting, "Sweet Home Alabama will now be home to one of the largest firearm industry operations in the nation. Obtaining a CCW permit is quick and easy and does not require training." It also cheerfully observes that "Louisiana has a very strong 'Stand Your Ground' statute and wide CCW reciprocity, which is good news, since your chances of being a crime victim in New Orleans are pretty decent." The Brady Campaign gives Alabama a D- and Louisiana an F, ranking them both in the top ten states with the highest gun death rates.

Extreme violence can happen anywhere — Sandy Hook and Isla Vista happened in states with A- Brady scores. But it is undeniable that motive and access are a horrible combination. Mother Jones reported last month on mass shootings in America over the last several years and noted that the majority involved legally obtained weapons. How can we look at that and not just say we have a problem, but do something about it? As Vox and the Stanford Geospatial Center report, in the less than three years since Sandy Hook, "At least 235 people have died in other mass shootings." The report is also quick to note that mass shootings still represent a very small fraction of America's gun violence — but that should not be a consolation. Quite the opposite. It should be a slap to the head to shake us out of our collective helplessness at the hands of the gun lobby, not just when a big shooting happens, but every damn day of the year.

I have respect for my friends who own guns and use them responsibly, including friends in states with very casual laws. But like a lot of rational Americans, I am not okay that people are dying because we as a country as still clinging tenaciously to a dysfunctional relationship with our guns that was originally framed at a time when "I'm going to go shoot up a captive room full of people" was not really a consideration.

This week, President Obama spoke to the BBC just hours before the shooting in Louisiana, saying, "The issue of guns, that is an area where if you ask me where has been the one area where I feel that I’ve been most frustrated and most stymied, it is the fact that the United States of America is the one advanced nation on Earth in which we do not have sufficient common-sense, gun-safety laws." Why? Because we've been bullied into believing we can't change anything and that "freedom" means unfettered access to murder machines. Or, as writer Dan Hodges observed in June, after the last mass shooting, before the next one, "In retrospect Sandy Hook marked the end of the US gun control debate. Once America decided killing children was bearable, it was over."