Dude, where's my car?: How stoned is too stoned to drive? 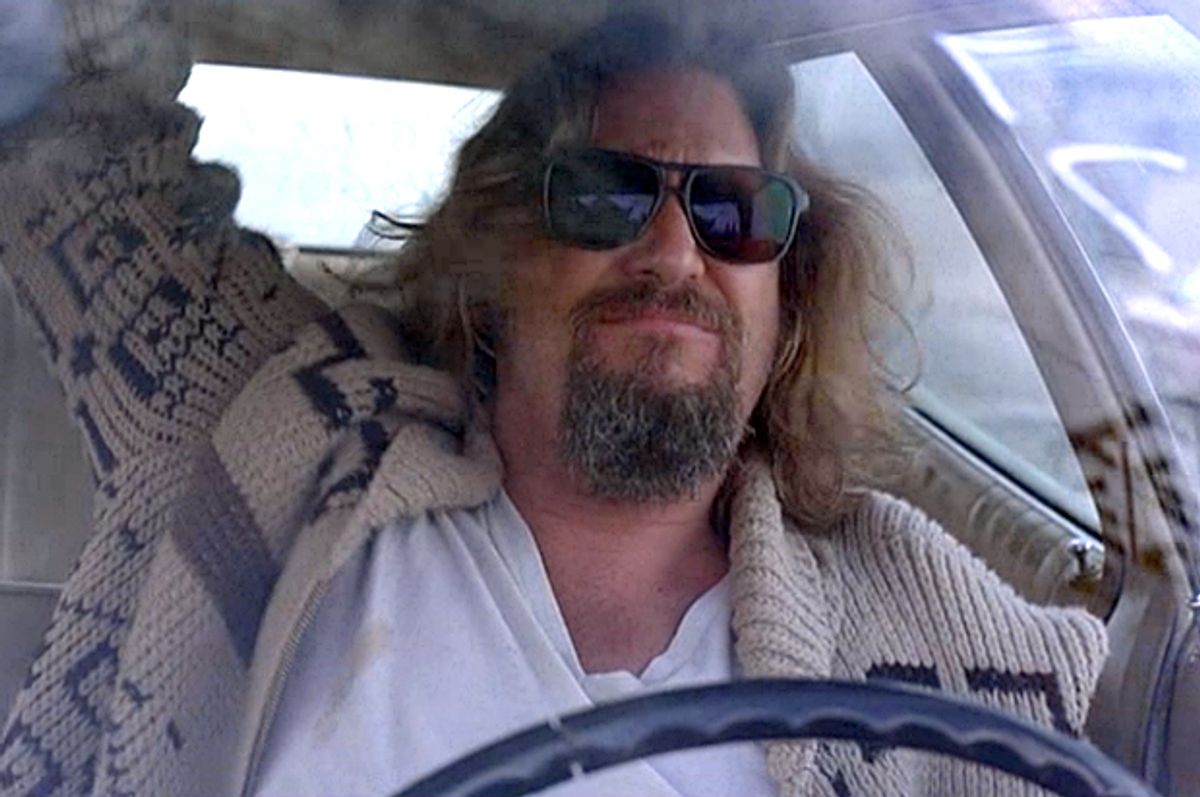 Jeff Bridges as The Dude, in "The Big Lebowski" (Gramercy Pictures)
--

In STONED, palliative care physician Dr. David Casarett sets out to do anything—including experi­menting on himself—to find evidence of marijuana’s medical potential. He smears mysterious marijuana paste on his legs and samples pot wine. He poses as a patient at a seedy California clinic and takes lessons from an artisanal hash maker. In conversations with researchers, doctors, and patients around the world he learns how marijuana works—and doesn’t—in the real world.

I’m curious about marijuana’s effects on someone’s ability to drive.  And I’m curious about its effect on insight.  Does a stoned person know that he’s too stoned to drive?  I’m about to find out.

I’m standing in a deserted parking lot next to an aged Honda Civic with my patient Jeff, a medical marijuana user (and driver), who has just smoked the contents of a decent-sized joint.  I envisioned performing a formal driving test with traffic cones, but alas, I didn’t plan ahead. So instead I stopped at a grocery store and picked up ten pounds of bananas. In the past few minutes, as Jeff was turning his joint to ashes, I arranged twenty-four bananas spaced 10 feet apart in two parallel lines forming a lane about twelve feet wide.

Now as we sit in Jeff ’s car I explain my plan. First, he’ll drive between the two lines of bananas. Then he’ll back up the same way. Then, as fast as he can, he’s going to weave through the bananas on the right side, execute a U-turn, and then weave through the other line.

It’s a simple plan, and Jeff is nodding. But he’s he has the glassy-eyed expression of a dead fish, and it seems like he’s paying a little too much attention to a flock of seagulls clustered at the far end of the parking lot. I tighten my seat belt.

But Jeff isn’t ready to drive. He’s not even sure where to put his feet. So we sit in companionable silence while Jeff is entertained by the parking lot’s resident seagulls.

How long are we going to have to wait until Jeff ’s brain rejoins us? Based on what I’ve read in the executive report on marijuana and driving that was published by the National Highway Traffic Safety Administration, it might be some time. That document is about as dull as it sounds, perhaps because the clean-living folks at the NHTSA are not terribly enthusiastic about drivers getting stoned. For instance, they warn that marijuana impairs driving ability immediately, and that its effects can last for up to three hours.

Twenty minutes after Jeff finished his joint—and well within the NHTSA danger zone—Jeff says he feels a little better. He looks about the same, though.  And he’s still staring straight ahead, smiling, and laughing occasionally. So I’m  eager to see what “better” looks like once our wheels start turning.

First, Jeff seems to rediscover his feet, and he releases the clutch and puts the car in gear.

The concept of a manual transmission seems gloriously fresh to him. He contemplates the gearshift with intense satisfaction and chuckles as if it’s telling him a joke he’s heard several times before. After a juddering stall, Jeff restarts the engine and repeats this maneuver. This time he also releases the parking brake.

The forward trip between the two lines of bananas goes well at first. We’re about halfway down the corridor, traveling at a blistering five miles an hour, according to the Civic’s tremulous speedometer, when we begin to veer subtly but unmistakably to the right. I can’t hear the banana meet its maker as it disappears under the right front tire, but a quick glance in the rearview mirror reveals that what remains is not pretty.

Then Jeff corrects our course, swinging the car a little too forcefully back toward the midline. He goes too far, though, so that we’re cruising toward the last banana on the left side. Closer . . . closer . . . Then it, too, becomes another stain on the pavement.

Marijuana studies conducted in driving simulators confirm that Jeff is exhibiting the classic behavior of someone driving while stoned. Namely, his reactions are delayed.  Then, when he notices a problem, he overcorrects.

There’s another feature of Jeff ’s motoring behavior that also appears in driving simulators, but it’s one that’s a little counterintuitive. Specifically, he’s not doing as badly as he should be. This is a guy who, just a few minutes ago, couldn’t find his feet. And yet he’s able to shift gears and keep the car (more or less) on track. That is, he’s able to compensate.

Although his driving is certainly impaired, and although I’d estimate his chances of murdering a tree as being at least ten times what it was in his sober state, he’s not flattened. He’s functioning—sort of.

In general, stoned drivers seem to recognize, at some level, that they’re a few neurons short of a full brain. They know that they’re impaired, and they adapt. They slow down, for instance. Jeff certainly did.

And that’s  good news. Going slowly gives stoned drivers a wider margin of error. Jeff ’s reaction times are pretty sluggish, but if he’s driving slowly enough, that provides a few extra milliseconds for his brain to catch up with events. Not enough to be safe, but enough, maybe, to spare a banana or two.

As he reaches the end of the obstacle course, he comes to a gradual stop. I remind him that the next task is to back up through the gauntlet that he’s just run. Jeff nods, concentrating fiercely on his rearview mirror.

Again he puts the car into gear, and I notice that we’re barely moving. We’re going so slowly that Jeff is having trouble preventing the car from stalling. As he turns his attention from the rearview mirror to focus on the delicate work of moving his right foot on the gas pedal, we veer to the left and clip another banana. This happens two more times during the short course, and three more bananas die on this run.

There’s a lesson here, too. It turns out that whether marijuana has a substantial effect on driving depends on what else is going on. When driving tasks are relatively simple (stop, go, turn), stoned drivers do ok, because they go slowly. Not great, but ok. And in simulations they sometimes even manage to avoid killing or maiming anyone.

But when things start getting complicated, driving performance plummets. If speed increases, as it does on a highway, then reaction times can’t keep up. Or if a driver faces multiple tasks (changing gears, switching lanes, navigating), performance goes to hell pretty quickly.

How Stoned Is Too Stoned?

There’s a rather large question hovering in the background of all of this. It’s one thing to say that marijuana and driving don’t mix. That’s pretty obvious.

However, if you’re a medical marijuana patient, that’s not helpful.  What you really need to know is whether and how to use marijuana and still drive safely. And this experiment hasn’t given us an answer yet.

It would be nice if Jeff had some way of figuring out whether he was too stoned to drive. The equivalent of a breathalyzer test for alcohol. But what?  I have an idea.

Following my instructions, Jeff gets out of the car and faces the empty parking lot. He tilts his head back and stretches his arms out wide, as if he’s about to join the flock of seagulls circling overhead. Then he closes his eyes.

Agonizingly slowly, Jeff brings his right forefinger within range of his nose, and then he drops it for a perfect landing. He opens his eyes and grins, as if this is a prize-worthy achievement.

It is, but that’s a problem.  It turns out that the classic “field sobriety test” that’s used to detect alcohol intoxication is pretty useless for identifying drivers who are stoned. So that won’t help Jeff or other patients figure out whether they can drive.

There’s another test that works better, although it’s not going to assuage the concerns of many state troopers. In an fMRI study of stoned drivers, fMRI changes weren’t associated with blood levels of tetrahydrocannabinol (THC), marijuana’s main psychoactive ingredient. But those changes were strongly associated with feelings of confusion. That is, the subjective feeling of confusion was a good predictor of brain changes.

So a good test of driving ability might be as simple as an honest self-assessment. Maybe the best predictor of whether your drive to the grocery store is going to end in a collision with a tree is how stoned you feel.

I decide to try this out on Jeff who, remember, has just smashed five bananas and passed a field sobriety test. I mention that we still have one more segment of the test to go, in which he’ll weave along one line of bananas, execute a U-turn, and then weave through the other line. How well does he think he’ll do?

I’ll second that. Score one for self-assessment.

And indeed he doesn’t.  The rest of my improvised course follows the same pattern, bringing the grand total of maimed bananas to eight.

So the best advice about marijuana and driving is: Don’t.  Just don’t.  Or if you do, follow the advice of the careful folks at the NHTSA and wait at least several hours (and probably much longer) before you even think about getting behind the wheel.

As Jeff brings the car to a juddering stop, his insight, at least, seems to be intact.

“I live just up that street over there,” he says.

David Casarett M.D., the author of "Shocked" and "Stoned," is a physician, researcher and tenured professor at the University of Pennsylvania's Perelman School of Medicine.