It's not who he is, it's who he hates: The secret to Donald Trump's toxic appeal

The media's attempts to take Trump down are doomed. The more they hate him, the stronger he gets 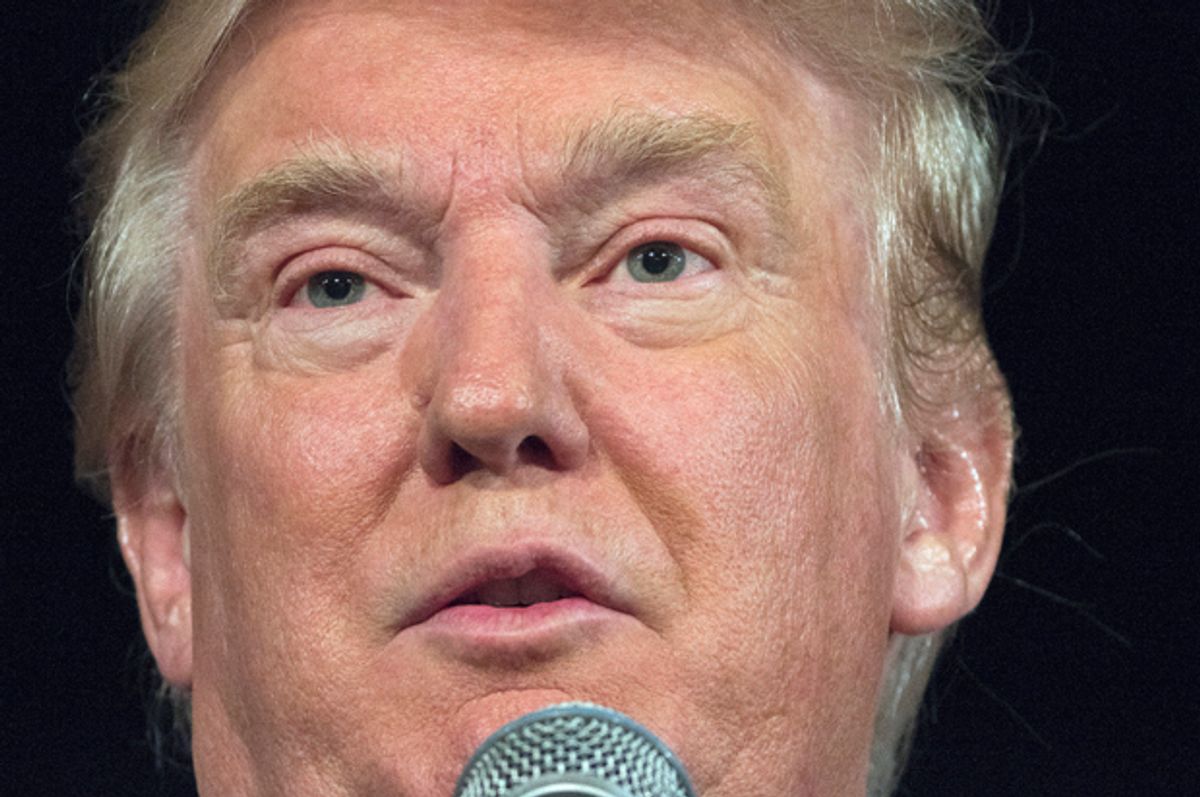 Now that Donald Trump’s presidential campaign is no longer a bizarro mid-summer distraction but a real-life thing that is actually happening, the response of the political class is beginning to change. At first, they treated “The Donald’s” candidacy as a welcome distraction from Hillary Clinton. But then Trump broke one of their cardinal rules — “Thou shalt not take cheap shots at Sen. John McCain” — and from that point forward, the relentless snark has been traded for “smarm” as far as the eye can see.

And with Trump still holding a small but significant lead over his rivals in national polling, the smarm is only getting worse. The smarm coming from Republicans is easy enough to explain; if he wins the nomination or runs as a third-party candidate, the GOP will lose in 2016. But elite media is getting rather smarmy, too; and it’s hard not to conclude that elitism is part of the reason why they write about Trump’s fans as if they were anthropological curiosities. After all, how are Trump supporters any weirder than those who’ve decided to back eccentric amateurs like Ben Carson or Carly Fiorina?

Which isn’t to say their incomprehension is fake. However smarmy their questions about his fans may be, the media’s complete inability to puncture Trump’s bubble shows that they come by their cluelessness honestly. They seem to think that if Trump backers are shown proof of his inconsistent conservatism, they’ll abandon him. So we get articles cataloging Trump’s “flip-flops” and heresies, and are expected to be surprised when they fail to make an impact. But this fundamentally misunderstands why so many people find Trump so appealing.

It’s not what Trump’s for that makes his fans love him. They love him instead because of what he is against. Even more specifically, it’s who he’s against — and who is against him — that, in Trump’s backers’ eyes, makes him so great. Obviously, when it comes to the “haters” and “losers” who comprise Trump’s enemies, Mexicans and other immigrants are at the top of the list. After all, these are the “criminals, drug dealers, rapists, etc.” who are taking American jerbs and bringing in “infectious disease.” But it’s not only Latinos who are to be hated; it’s China and Japan, too.

Racism and xenophobia are operative here, no doubt. But Trump’s brand of populist rage is rather free-floating; and his supporters seem to be even more passionate about his domestic foes. As Elspeth Reeve put it in the New Republic, some Trumpites love him because he is so aggressively politically incorrect. “He doesn’t know what ‘PC’ means,” as one New Hampshire supporter raved. For these people, Reeve writes, Trump is appealing because “he violates social taboos but not their own political sensibilities.” He says what they believe but don’t have the guts to say for themselves.

Granted, this sounds like a pretty frivolous metric to use when deciding who should be president. But humans can be exceedingly tribal and frivolous things! And because Trump’s fans believe that political correctness is primarily enforced by an ill-defined group of elites, his willingness to say things that most of us would consider grotesquely uncouth and bigoted is understood as a more wide-ranging opposition to the powers that be. Look, for example, at how Rush Limbaugh, another veteran practitioner of political resentment, recently defended Trump. He focuses almost exclusively on the billionaire’s critics, rather than the man himself:

[I]t’s always the media and the establishment that define whether somebody has stepped in it, not the American people. If the media find what Trump said outrageous, that’s all you need, and if the establishment finds that it’s outrageous, that’s all you need. And then you act like everybody thinks so. And then the perp apologizes, begs forgiveness, and is never to be seen or heard from again. Trump didn’t do any of that. He doubled down … In doing so, the American people have seen something they haven’t seen in a long time, and that is a target stand up and refuse to go away, a target stand up and refuse to apologize.

For Limbaugh, what makes Trump valuable is his willingness to transgress. The content of that transgression is almost secondary. As long as the coastal and media elites who Limbaugh depicts as the root of all evil are unhappy, Trump must be doing something right. “The reason that’s important,” Limbaugh added, “is because when the outrage originally happens … that is presumed to be the end of Trump.” But because Trump refused to buckle to a standard of behavior that Limbaugh considers biased and “arbitrary,” he won’t leave the stage until “the American people” have also had their voices heard.

The idea of Trump representing a cowed, downtrodden majority is not specifically Limbaugh’s. Trump himself has nodded toward the concept by referencing Nixon’s “silent majority.” Nixon, too, was a conservative leader with a history of flip-flops and moderation; but just like Trump, Nixon was able to easily overcome those hindrances by encouraging his supporters to think less about what they hope will happen and more about who they really hate. For Nixon, that meant sidestepping talk of price controls in favor of “Hanoi Jane”; for Trump, it means skipping over health care in favor of rants about Hillary Clinton.

As useful as Limbaugh is in terms of understanding Trump’s appeal, though, a recent quote from a right-wing evangelical organizer named David Lane is even better. Trump is an unabashedly secular figure; he recently told a group of religious conservatives that he doesn’t ask for God’s forgiveness, and referred to a communion wafer as a “little cracker.” Yet despite being so conspicuously unreligious, Trump, according to Lane, “is tapping into deep-seated anger in America, a nation founded by Christians.” The United States “is starving for moral, principled leadership,” Lane said. So he’s looking to the thrice-married Trump.

In the final assessment, understanding Trump’s popularity really isn’t so difficult. Like many a demagogue before him and those to come after, he is benefitting from a political calculation we make when social signaling is more important to us than public policy. The way Trump’s supporters see it, the enemy of their enemies must be their friend.